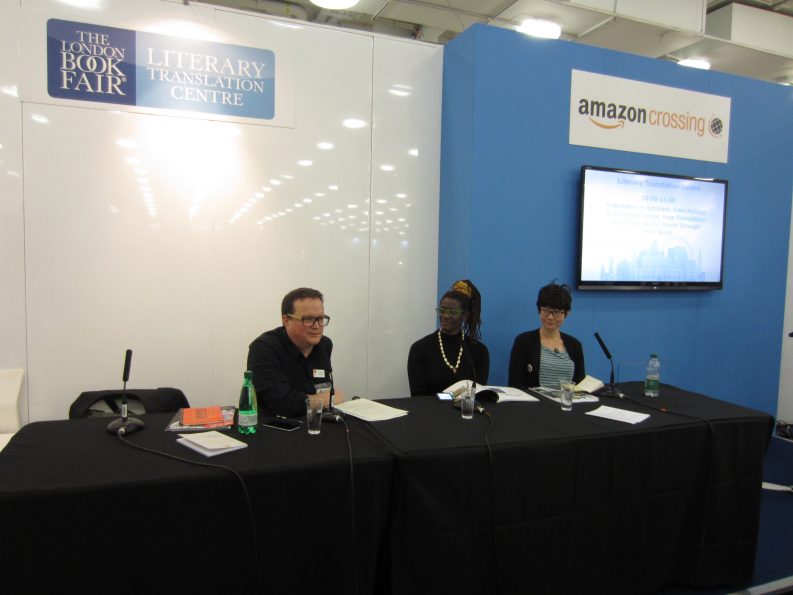 ‘Translators play an essential role in raising awareness of writers’ plight’ in many cases of peril, as was discussed in an #LBF16 Insights Seminar session. ‘Political Because of the Position English Occupies’

Translation was discussed — both as activism and in addition to activism — in one of many well-attended Literary Translation Centre sessions, Translator as Activism: From Politics to Cultural Change, How Translators Are Changing the World Through Their Work.

Translators, said Jarnes, “are involved with all work that English PEN does. We’re a writer’s organization. Translators are writers, of course, and are key to lots of the work we do.”

PEN writers all over the world are often at risk from violence. Translators play an essential role in raising awareness of their plight.

Jarnes gave the example of Cameroonian author Enoh Meyomesse, whose poetry was translated and published while he was in prison with the help of PEN translators. When he was released he said that knowing his poems were being read outside Cameroon helped him feel he was being supported.

“Translators have helped us urgently translate articles on freedom of expression by journalists from Mexico or Turkey,” said Jarnes.

PEN is working on formalizing an online resource for translator/activists with safety and legal recommendations but also as a way of communicating with each other.  There also have to be serious discussions prior to translation about the personal risk to each individual writer following international publication, said Jo Glanville, director of English PEN.

But translation can also be activism in simply working to get more voices from other countries published in English.

“It’s political because of the position English occupies,” said Jarnes, “It matters that voices and stories from other places are made available to English [speakers].”

For Khadija Sesay who grew up in England with Sierra Leonean parents, translating African languages to English is important as an educational tool for children of immigrants.

“Parents didn’t necessarily want to teach their children their language of origin and it was frustrating not being able to speak their language. Now parents are realizing this is the wrong way to go.”

In her poetry collections, Sesey said, she said she likes people “to mix languages they have. Some poets in Gambia speak three or four languages, for example. They speak English, French and probably two African languages. Now we’re getting some great rap stuff and the lovely thing is that you can understand it all even if it’s in several languages.”

‘The Definition of Writer Has Expanded’

“In the last 100 years since PEN was set up the definition of writer has expanded to journalists and bloggers and many other definitions including translators,” said Jarnes

“English speakers want to read more and more work coming from other places. It’s good that people feel it’s not something distant from them,” said Sesay, adding that there was more and more collaboration between writers and translators, developing a real community.

There is solidarity between writers, said Jarnes. “Within this community, you can decide what your voice is, where you’re coming from and whether to get your message across to as big an audience as possible. We support over 200 languages getting translated into English. Many of these writers tend to be established authors in their own countries.

“But there are also dissident writers or a writer on the move—part of the refugee crisis for example—and this is an important aspect as well.  We’re moving away from translators being invisible and moving towards them going to meet writers out in the world.”

Translators are also being taken more seriously as writers and public intellectuals with important information to impart, in particular translators who can explain situations in areas of the world where there is interest today.  Alice Guthrie, who translates contemporary Arabic literature, wrote an article on the meaning of the word Daesh, or Isis, which was widely read.

Finally, literary translation plays a role in community engagement, said Sesay, who does work in primary schools encouraging children to tell stories in their own languages.

“If you start children young, they will be understanding of each other’s culture through languages. It happens naturally.”

Because of the number of people in the UK from immigrant backgrounds, English PEN runs creative translation workshops encouraging adults to tell stories in their own language. “If you’re bilingual you already feel at home in translation,” said Jarnes. “It’s about working with young people who already have languages in their lives and making it creative.”