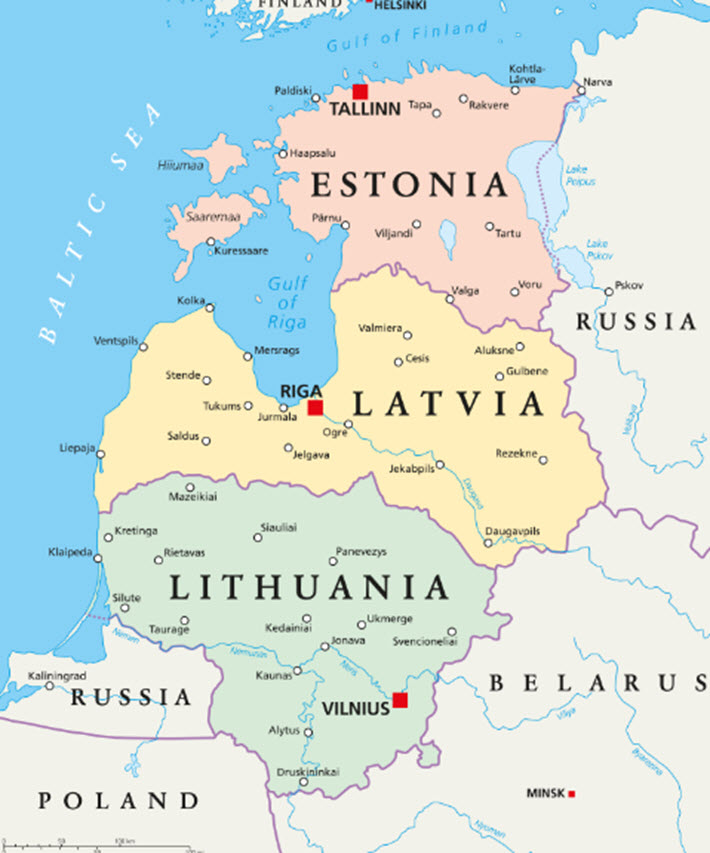 ‘We are a little isolationist,’ Ivars Ījabs says to fellow from the Baltics in a session of constructive candor on ‘the paradox of the open culture’ at London Book Fair. Among the most valuable of more than 200 Insight Seminar Programme sessions at London Book Fair this year are discussions in which publishing’s needs for prosperity and growth meet the challenges of our international relationships and inter-cultural tensions. Here, Olivia Snaije reports on just such an outing. Can an influx of English into a small, important market, for example, “squeeze the language out”? — Porter Anderson

One of the Insight Seminar Programs held on the first day of the London Book Fair was on the subject of preserving culture and language: Crossroads Are Everywhere — Writers from Estonia, Latvia, and Lithuania Discuss the Topic.

“If we look at the Baltics, historically we have been at the crossroads for a long time. We have lived with migration for centuries.”Rein Raud

In a discussion moderated by translator and author Daniel Hahn, Estonian scholar and author Rein Raud exchanged views with Latvian political scientist and commentator Ivars Ījabs, and Lithuanian writer and artist Paulina Pukytė on a variety of subjects including nationalism, migration, and cultural preservation.

What emerged was that beside their shared history of being occupied by the Soviet Union between 1945 and 1991, citizens of the three countries may feel they have little in common.

The irony: These three nations, as a unit, are to be London’s Market Focus in 2018.

As Raud, joked, “It’s like three prisoners sharing a cell; when they are let out [of prison] they have no reason to keep in touch with each other.” For the sake of reference, the Estonian language is Finno-Ugric and many Estonians feel more of an affinity towards Scandinavian countries. However, Estonia and Latvia have a predominantly German history (the Hanseatic League) while Lithuania shares its history with Poland. Lithuania was also a large cosmopolitan political entity between the 13th and 18th centuries and Vilnius was dubbed “Jerusalem of the north” by Napoleon in the early 19th century.

The first question addressed by the panel was how to protect their respective languages without falling into aggressive nationalism:

“Vilnius was a multicultural city for centuries, but the trouble is there is fear of losing some kind of Lithuanian identity,” said Pukytė, quoting from a recent newspaper article that said that Lithuanians cling to an identity that is unchanging, seeing and analyzing themselves as a sort of indigenous tribe that is locking itself into a reservation. Pukytė, who lives in the UK said she felt that being hybrid is an advantage; she writes in Lithuanian but is also productive because she can be objective about her own culture.

“Living away from Lithuania for 18 years has changed me. I don’t want to represent Lithuania; of course here I represent my country but in my writing I don’t strive for that. At the same time it’s inevitable that I bring something from my cultural background.”

Ījabs noted, “When we were occupied by the USSR we only focused on ourselves, preserving ourselves. Now we are moving towards something more global. There is a perception that we are moving so fast that we are losing the ground under our feet. We are a little isolationist, and this inward looking [tendency] can be a problem.”

‘The Paradox of an Open Culture’

Raud said he felt that if the question of identity had to be constantly discussed it meant it was already a problem. In what he called “the paradox of an open culture”, he said he felt that a society that was able to take in a variety of cultures was more likely to survive. It is possible, he said, to integrate other cultures while preserving one’s own.

The issue of language was discussed—Ījabs pointed out that because Latvia was such a small market, foreign languages, in particular English, could “squeeze the language out.” His colleagues in Estonia, he said, told him it was more and more difficult to publish academic research in Estonian. “We need to decide what linguistic policy we should have.”

Raud, on the other hand, said he was all for scientific research being published in English for the purposes of sharing with a wider audience. “English is the Latin of today. I think even if we publish in English we can become better known this way.”

Pukytė mentioned that translation was a big problem in Lithuania because Lithuanians are usually the ones translating into English and the quality was questionable.

“When we were occupied by the USSR we only focused on ourselves, preserving ourselves. Now we are moving towards something more global…We are a little isolationist, and this inward looking [tendency] can be a problem.”Ivars Ījabs

Language does not necessarily mean culture, argued Lithuanian historian and author Kristina Sabaliauskaitė, who was present in the audience. “There is a strong literary tradition in Lithuania but many authors didn’t write in Lithuanian. We can’t define Lithuanian literature by its language.”

Czeslaw Milosz and Romain Gary — born in Vilnius in 1914 as Roman Kacew — were Lithuanian and often depicted Vilnius in their work, for example, but did not write in the language, she pointed out.

Is there a common cultural policy among the Baltic States?

Raud and Pukytė seemed doubtful. “What unites us is the past, a common fate, but there is nothing looking toward the future,” said Pukytė.

Ījabs was more hopeful, citing cooperation in the world of film and music and a common membership in the European Union, but “there is a deficit,” he admitted.

Dace Malbārde, the Latvian Minister of Culture, was in the audience and reminded the panelists that the Baltic States were participating in a common pavilion at the upcoming Venice Biennale and were cooperating on films and cultural festivals abroad.