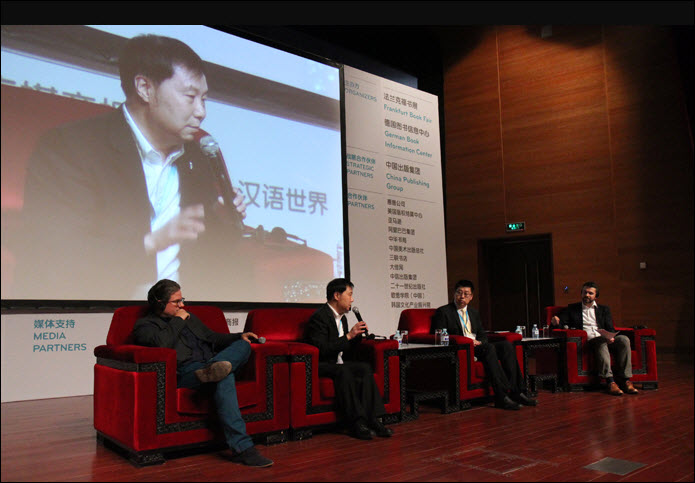 “Our strategic aim is to establish access for international publishers and other companies to entirely new players,” says Frankfurt Book Fair’s Juergen Boos in announcing the StoryDrive Asia program’s expansion to Singapore. This conference session was part of StoryDrive Asia 2014 in Beijing. StoryDrive returns to China in May, and in November has its inaugural staging in Singapore. Image: Courtesy Frankfurt Book Fair

‘An Under-Explored Market With Huge Potential’

Aready a four-season hit in Beijing, StoryDrive Asia has its inaugural Singapore staging November 10 through 16, according to an announcement from Frankfurt Book Fair Director Juergen Boos. The conference and exhibition are being produced in cooperation with event organizer MP Singapore (part of the MP International group) and the Singapore Book Publishers Association.

Featuring a rights-and-licenses marketplace for cross-media transactions, StoryDrive Asia is expected by its producers to stand as the the Asia-Pacific region’s most significant trade event in publishing. The multi-disciplinary nature of the StoryDrive concept — comprising books, film, television, gaming, and merchandise — is devised to spotlight broad media trends and innovations, while promoting enhanced professionalism in business relations among companies in the Association of Southeast Asian Nations (ASEAN) region.

Particular emphasis is being placed in this new iteration of StoryDrive on interactivity, utilizing an international conference program, devoting the first two days of the event to the trade and professional community, then opening to the public on the third day. Authors are anticipated to play a high-visibility role in the programming, thanks to the assistance of the Singapore Writers Festival. In announcing the Singapore debut of StoryDrive Asia, Boos has released a statement saying:

“With a population of more than 620 million, the Southeast Asian region with its ten countries remains an under-explored market with huge potential.

“By hosting StoryDrive Asia in the media metropolis of Singapore, our strategic aim is to establish access for international publishers and other companies to entirely new players.

“The establishment of the ASEAN Economic Community (AEC) in 2015 is a major milestone in the regional economic integration agenda in ASEAN, offering opportunities in the form of a huge market of US$2.6 trillion. That’s why now is the right time to attract publishers and service providers to Singapore, as the ASEAN grouping establishes itself.

“Apart from the Frankfurt Book Fair, which already gathers exhibitors from all parts of Asia every year, there is as yet no comparable event bringing together publishing houses and media enterprises from around South and Southeast Asia.”

‘Our Smallest Publishers Are Globally Competitive’ Peter Schoppert is President of the Singapore Book Publishers Association, and is quoted in a prepared statement, saying:

“Singapore’s book publishers, from multinationals to SMEs, contribute to the national efforts of education, research and the arts and creative industries.

“Even our smallest publishers are globally competitive and reach overseas for markets, particularly in the ASEAN region.

“Last year we worked with the Frankfurt Book Fair and the National Arts Council to organise the very successful Singapore Publishers Symposium, and we see this new event as the natural next step for our industry.”

The symposium to which Schoppert refers was held in early November 2015 in conjuction with the Singapore Writers Festival. It was an informative and gracious symposium centered at Singapore’s former statehouse and hosted by Shoppert, with Frankfurt’s Boos in attendance.

We were joined on the speakers’ roster by Sangram Surve, whose Think WhyNot Pte Ltd. (Singapore and Mumbai) has been instrumental in the blockbuster success of author Amish Tripathi. And of particular interest were energetic comments from many representatives of ASEAN nations, whose interests in developing new market ties through translation rights and closer cooperation was evident. We are very excited to be establishing this successful format in cooperation with the Frankfurt Book Fair and the Singapore Book Publishers Association.

“It means we’re achieving an innovative event highlight for all companies that deal with content – both here in the region, and far beyond.

“Singapore is the hub for this region.

“With its highly developed infrastructure it is the ideal place for companies of this kind to start.”

StoryDrive Asia Beijing is again scheduled for the China National Convention Center later this spring. Its exhibition runs May 28 to June 1, and its conference is set for May 29 and 30. StoryDrive Asia is a part of China International Fair for Trade in Services (CIFTIS). CIFTIS is an international comprehensive service trading platform, hosted by Ministry of Commerce of the People’s Republic of China and organized by the People’s Government of Beijing Municipality.