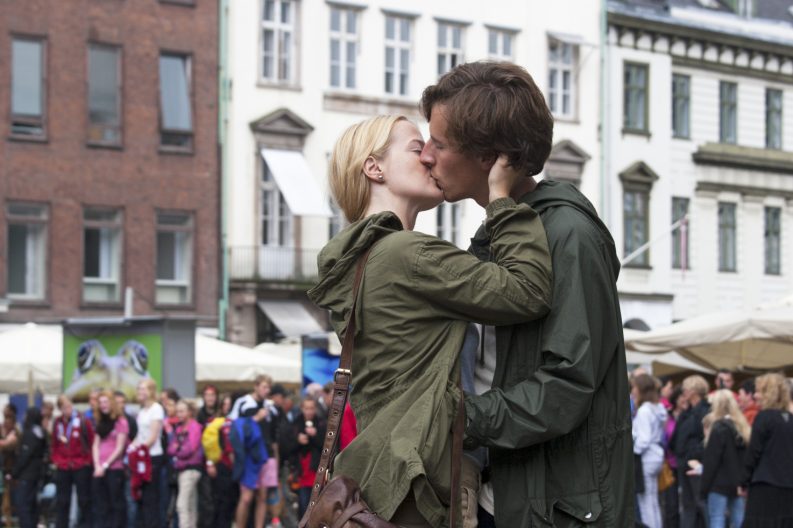 Romantic fiction in Copenhagen has mainly lived in kiosks alongside magazines — until now. As April smiles on Denmark, new imprints are bringing romance into the open. ‘Curated With Their Target Audience in Mind’

Denmark’s romantic fiction traditionally has been distributed and sold through magazine channels. Rarely have romance novels been found in physical bookstores. These love stories – mostly with a guaranteed happy ending – since 1989 frequently have arrived in the kiosks from Harlequin’s Danish division, today part of HarperCollins Nordic. Kiosks are becoming scarcer. Distribution volume is diminishing. Prices are going up.

It quickly becomes harder to earn a profit from selling low-priced books in beautifully colored covers. So the trend has created a hole in the market and has led Denmark’s largest book publishers, Gyldendal and Lindhardt & Ringhof (L&R) to launch two types of initiatives:

A ‘Love Trend’ in the Market

Ebooks may make up for some the dwindling Danish print-romance market because they offer easy access, a large selection of titles, and lower prices.

Some of the old publishing houses that are today part of Lindhardt & Ringhof have always published romance: they produced some of the cheap books for sale in kiosks and other magazine outlets. So the Egmont-owned L&R holds the Danish publishing rights to a large backlist of international romance titles by authors including Barbara Cartland, Danielle Steele, Victoria Holt, and Swedish-born Margit Sandermo.

L&R publishes these works under their major digitization project and imprint SAGA Books. The genre works well digitally, especially in ebook and audiobook subscription services like Mofibo. There, readers can finish one book and get the next one immediately.

Some Are Skeptical of Subscription Services Lasse Horne, publishing director at L&R’S SAGA Books, tells us that the most important boost for romantic fiction is a subscription model with flat-rate pricing. At the same time, he says he finds the biggest challenge to be that agents and rights-holders of some of these authors’ works don’t believe there’s much money in subscriptions.

Meanwhile, Harlequin has also spotted the market potential of digital romantic fiction in Denmark. According to Alice Krogh Scott, the company sees an audience for its ebooks. “The more broadly the books are distributed,” she says, “the easier it becomes to find new readers.”

Publishing Perspectives understands that Harlequin may be negotiating with Mofibo to put its ebooks into that subscription program, a decision that many publishers in the UK and US have struggled with at times.

Scott says she also welcomes the appearance of these two new competitors in the genre, Flamingo and Lovebooks: they’re signs of a growing market. Gyldendal’s Flamingo logo is a bird of another feather, playing on the publisher’s iconic crane. Often called Denmark’s “mahogany publisher” for the seriousness of its literary legacy, Gyldendal’s pink hearts on the Flamingo artwork are unusual spots of color for this house’s branding.

The digital potential of the genre seems to be what’s prompting Denmark’s two largest book publishers to go into romance. But both teams also say it’s now more acceptable in Danish society to like and read romance, so they’re making an effort to produce beautiful books with intriguing cover designs.

For now, neither Lovebooks nor Flamingo has plans to develop original Danish romance fiction; almost everything is translated from English. But Harlequin’s Swedish counterpart is producing original Swedish romance: this could be the way Gyldendal and L&R will go, eventually, too.

At L&R, Lovebooks hasn’t emphasized the classic romance canon of Cartland. The target audience is primarily younger women and so the focus has been almost entirely on contemporary love stories. For their part, the Gyldendal Flamingo editors are making it clear that their imprint is not a last resort for manuscripts that haven’t found a home elsewhere: “Flamingo books may be considered light reads by some,” says Editorial Director Sofie Voller, “but they’re of high quality and they’re carefully curated with their target audience in mind.”

This age span in the consumer base has led the Flamingo team to consider a family drama with a romantic overtone as readily as a more straightforward love story. The emphasis is on the female reader and delivering entertainment.

But Flamingo also serves as an internal lab for Gyldendal’s explorations in technology, business and publishing models, including staff organization and workflow. The imprint is driven by the marketing department. Acquisitions therefore may be triggered more by market demand and performance than by editorial priority. Lindhardt & Ringhof SAGA Books Lovebooks’ editorial team appears in their own commercial materials like this image. That’s the imprint’s editor, Christina Yhman Kaarsberg in the center.

Print Puts Lovebooks on the Page

The Lovebooks initiative was expected to be digital-only when launched by L&R in 2015. But a demand for print surfaced quickly and POD and even stocked print runs followed. The Lovebooks division was integrated into the department that handles translated fiction, and the focus has remained on content and community.

Today, all titles from both Lovebooks and Flamingo are published as ebooks, audiobooks and in print. Lovebooks Editor Christina Yhman Kaarsberg tells us that social media interest in the imprint’s output has been almost tremendous.

Readers, she says, post photos of their physical books and join Lovebooks-initiated read-along events, all against a backdrop of constant conversation about their romantic literary interests.

While neither of the imprints plans to distribute its books in the magazine supply chain, Flamingo’s Voller says that selling high-quality romance in shops that carry other gifts for women (chocolate, flowers, jewelry) might not be a bad idea.

Marie Bilde has spent 20 years in various sectors of Danish publishing, holding positions as lexicographer, digital editor, and manager of digital production and distribution. She has an MA in French language and Culture, and a BSc in Computer Science. Today she works as an independent book industry consultant in Copenhagen.

And if you can be in New York City on June 13, join us for a special Publishing Perspectives conference, Rights and Content in the Digital Age.