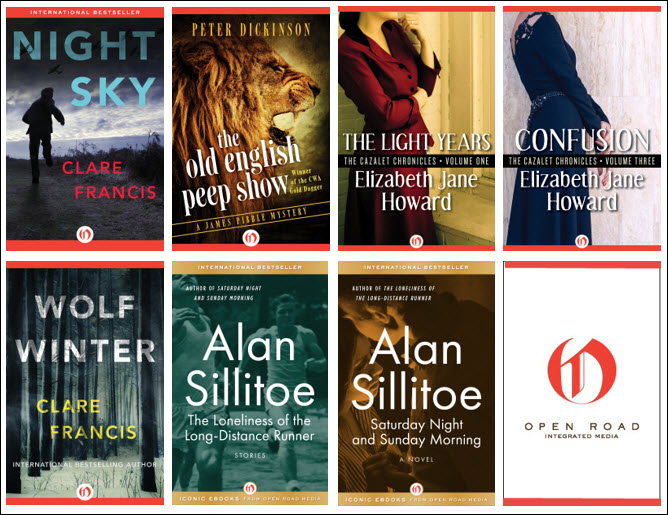 Is a British vertical in the offing at Open Road Integrated Media? No one is telling, but Charlie Greig says she has more than enough backlist to make one. “We have really been lucky in that we have managed to get rights for a lot of ebooks that others haven’t,” says Charlotte “Charlie” Greig of Open Road Integrated Media.

“The only thing we have to worry about is whether we can get world English language rights, or we just get North American or just UK or a mixture. Those are the major issues for us, how many territories can we get. But yes, we’ve really been lucky.”

And then Greig and I burst into laughter.

“That’s a very British way of saying it, isn’t it?” she concedes. The “luck” of Open Road’s iconic rise to prominence as the world powerhouse in digital backlist walks around on two legs and is named Jane Friedman. In her long tenure as “the quintessential publishing person” — her own apt term for herself — Friedman was able to identify the value both in digital (audiobooks, in particular) and in backlist well before many competitors had caught wise to e-anything.

Her persistence and ingenuity in come-hithering rights — I’d say Hoovering them up, but I’d set off Greig again — has meant that Friedman now houses for a global readership some of the greatest authors’ and estates’ backlists in the world. She and Open Road are simply early legends in digital publishing.

Friedman, the famous veteran of HarperCollins (11 years) and Penguin Random House’s Knopf (29 years), isn’t in London for Book Fair this year, but she traveled from New York in December to address The Bookseller’s FutureBook Conference in December, pointing out then the interesting work her company is doing in creating verticals such as the The Lineup (“Where Murder and Mayhem Is Delivered Daily,” thank you very much).

This year, Open Road is represented at #LBF16 by Greig and her associate Tina Pohlman, and you can find the company’s stand at 4N8D.

“Language is always an issue,” Greig says, “because of who translates and how and the rights of translators. We don’t always do as many translations as we might like to do.”

Nevertheless, “Bring out your backlist1” is the clarion call of these Open Roadies, and Greig’s position as the lead representative of that chant on the UK side is one she relishes.

Ask her whose backlist she’s either collecting or stalking in the sceptered isles and — short of hanging out at the Shakespearience — Greig has a lovely list at the ready. “In some cases it’s quite a mixture. For example, the Alan Sillitoe (The Loneliness of the Long-Distance Runner), most of that is world English — a few of them were already out here but not many.

“I just bought Piers Paul Read. You remember Alive: The Story of the Andes Survivors. We bought world English and Spanish rights for that one.”

What develops as you talk with Greig is an understanding that the UK canon provides a fantastic field of potential acquisition for a company like Open Road. Even without venturing much beyond world English rights, capturing the backlisted best of a Clare Francis or a Peter Dickinson makes the hunt worth it and keeps Greig cheerfully on the prowl.

In fact, as long as the company is doing new things with verticals — though not ready to talk too much about that, Friedman tells me — isn’t there a perfect case within Open Road for a British vertical, a way to categorize and introduce to farther-flung readerships what makes the great work great?

“But, look, I’d be up for a British vertical,” Greig says loudly (perhaps the Friedmanian ear might catch that giggle), “and just think, I’ve bought Neil Cross,” he of the BBC crime drama Luther; an easy sell to a televisionary market if ever there were one, you’d think.

However the clever marketing folk of Open Road play it going forward, Greig is right when she points out that — like good backlist, itself — the Open Road team is able to do what it does because they’re familiar faces in an industry that loves personal relationships.

“I’ve been in this business too long,” Greig laughs, “at least 25 years, and they knew me already. And we’ve proved ourselves. Most of the agents now have at least one with us.

“It’s really exciting to make these wonderful authors'” work live again. Quite frequently, Greig says, the reason that she and Friedman can pick up a great writer’s backlist is merely that “someone hasn’t gotten their act together to sell the rights. And the authors are getting a bit older and it’s great for them.”