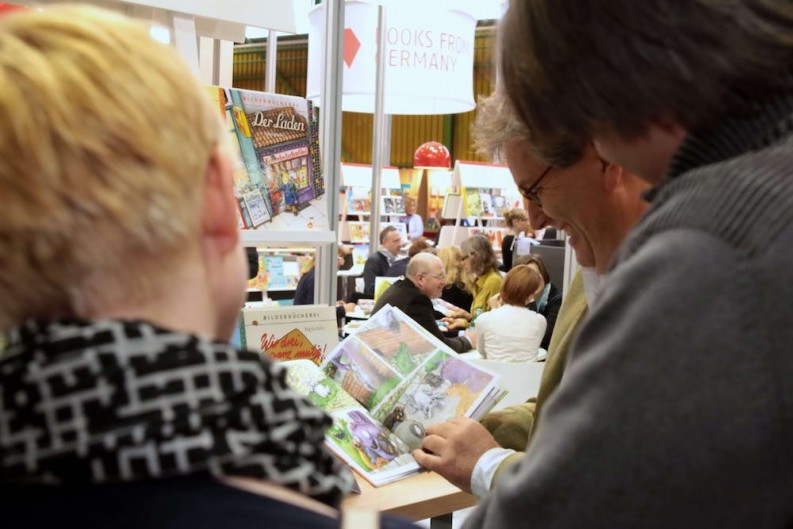 With a contingent of up-and-coming illustrators and enthusiastic publishers, Germany’s Guest of Honor program at the Bologna Book Fair is designed to inspire and engage the international community. Germany has attended the Bologna Book Fair with a collective stand for over 40 years. (Image: Frankfurter Buchmesse / Pasquale Minopoli)

By Laura Austen and Hannah Johnson

“It’s a great honor for us to act as cultural ambassadors and to bring our authors and illustrators to the world,” said Ulrike Metzger, Publishing Director Children’s Books at S. Fischer Verlage about Germany’s turn as Guest of Honor at the 2016 Bologna Book Fair—the place to be for all those who work in the children’s publishing industry.

Organized by the Frankfurt Book Fair under the motto “LOOK!”, the Guest of Honor program showcases the country’s children’s book authors, illustrators and publishers. The goal of the program, Frankfurt organizers said, is “to reveal the full spectrum of the contemporary German illustrators’ scene, with the aim of introducing new artists to the international publishing world.”

The LOOK! project has received additional support from the Goethe-Institut and financial backing from Germany’s Federal Foreign Office.

The 300-square-meter exhibition displaying 85 children’s titles and works by 30 up-and-coming illustrators from Germany is at the heart of the program. It broadcasts the talents of award-winning illustrators like Jutta Bauer, Anke Kuhl, Philip Waechter and Henning Wagenbreth. After the Bologna Book Fair, the exhibition will be shown at Hamburg’s Fabrik der Künste on June 14 to July 3.

“For this exhibition we have brought together 30 of the best illustrators living and working in Germany, who have yet to make their international break-through, as well as 55 established masters of the craft whose names are familiar to readers around the world,” said Juergen Boos, Director of the Frankfurt Book Fair.

Renate Reichstein, Rights Director at Oetinger, sees this illustrator exhibition as “particularly important with regard to showing ‘the world’ that there are a number of modern illustrators in Germany who are trying new things and gaining attention.”

“Of course, we are hoping for more attention from our licensors abroad,” said Michael Schweins, Publisher of Berlin-based arsEdition. He’s looking to this Guest of Honor program to bring in “more appeal, more awareness, more German picture book licenses abroad.”

In addition to the Guest of Honor exhibition and illustrator showcase, 34 German publishers are exhibiting at the German collective stand (Pavilion 30, B34), and others have set up their own stands nearby.

“Naturally, we’re hoping to impress other countries with our books,” said Susanne Schneider, Rights Manager for Baumhaus, Boje and One Verlag (Lübbe). “For this reason, [Lübbe is] also a sponsor of the international publishing party on Monday night [April 4], and we are looking forward to lively exchange with our international guests.”

German Illustrators on Display in Bologna: