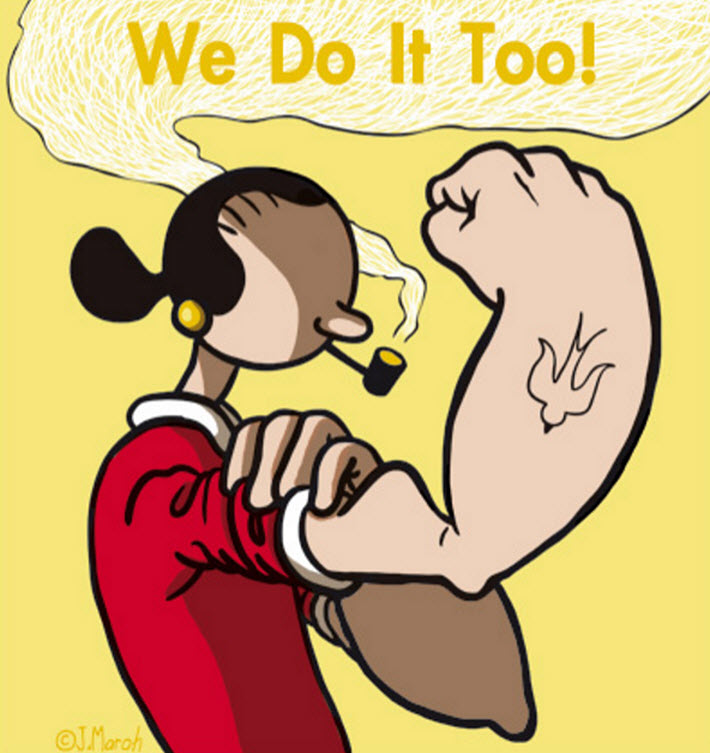 Illustration from the site Female Comics Creators Against Sexism

‘Things Must Change at All Levels’

The subject of women comics artists has been making headlines since January when the prestigious 43rd Festival International de la Bande Desinée at Angoulême announced its longlist for the grand prize and not a single woman was among the 30 nominees. A boycott was called for, comics artists including France’s Joann Sfar and Riad Sattouf withdrew their names from the list, which was abandoned in favor of an open vote.

The incident brought to the fore what women in the field around the world say is a longtime problem. An informal discussion on the subject began at this year’s Angoulême festival, and will be continued at the London Book Fair during a panel called “Women in Comics: Is the Graphic Novel Industry Failing to Recognize Female Creators?”

The panel is to include: Both Pearlman and Niffenegger are part of an on-going exhibit, “Comix Creatrix: 100 Women Making Comics” at London’s House of Illustration.

Comics expert Paul Gravett, who co-curated the exhibit, says that the cartoonist and illustrator Posy Simmonds, recently told him that she felt she had been having the same conversation about women going unrecognized since the 1970s. On April 12, Simmonds will meet at 7 p.m. in a discussion with the French cartoonist and the only woman to have won the Grand Prize at Angoulême, Florence Cestac, at the House of Illustration.

In a recent interview with Le Monde’s Solène Cordier, Cestac said she supports whole-heartedly the initiatives taken by the France-based international collective Female Comics Creators Against Sexism. She was quoted as saying, “Young women cartoonists have been faced with difficulties when exhibiting and publishing [their work]. The comics sphere is not bigoted, but it’s very masculine. Things must change at all levels: in publishing houses, bookshops and at festivals.”

The London show is the UK’s largest exhibit to date of work by pioneering female comics artists. In planning it, Gravett and his co-curator Olivia Ahmad widened their scope in order to give the show context; the earliest work is from the 18th century and the newest is contemporary. “Women have always contributed to comics,” says Gravett. “They were involved in every kind of genre — autobiographical certainly, but also plenty of funny reportage, pure fiction, fantasy and science fiction, and erotica. Historically they were undervalued and in the 1940s and 50s their work was often unsigned.

“In the late 1960s and into the early ’80s there was a transition with the underground and punk era when women could participate in adult comics.”

In the world of mainstream US comics like Marvel, or DC, “It is a very boozy, cliquey environment,” says Gravett. “It is positive to see that they are trying to bring in female characters and are getting away from archetypes, for example with the overweight character Faith, drawn by Marguerite Sauvage, in the superhero universe, Valiant.”

Young women are still trying to find their way into this universe, says Gravett, “There’s more opportunity with graphic novel publishers and access is easier without male gatekeepers. The graphic novel has enabled comics artists to not have to come up with a hero; they don’t have to conform to expectations and formulas and women can bring in a lot of approaches to these kinds of comics.” Corinne Pearlman began working in comics in the UK in the 1970s and 1980s and was part of a collective of women cartoonists called Fanny in the early 1990s.

“My personal experience of being in comics,” Pearlman says, “is that women were always involved. It was a radical, political time. There were lots of feminist groups. We were doing the kind of comics that we wanted to do. The comics movement here has always been more independent and more ‘grassrootsy.’ We happily coexisted with the mainstream industry. The comic book industry coming from the US like Marvel and DC wasn’t my thing. We’re much more influenced by European comics. We’re consistently looking at the wonderful things that are available in France. The French industry has a different trajectory from ours, it’s broader and there are many more publishers.

“So it was a surprise to hear that there were so few women working in the comics industry in France,” she says. “What’s so encouraging for us is that it doesn’t feel like we’ve had that problem” in the UK.

At Myriad Editions, Pearlman says the team is all-women. She says they publish more women than men but that isn’t deliberate. “It reflects the amazing work that women are doing,” she says, “like Kate Evans on climate change or Nicola Streeten’s graphic memoir about the death of her 2-year-old son. These women are creating the things I want to read. I think the emphasis that women put on domestic and daily life is such an important contribution to comics.”

Although Pearlman says she always thought French comics were more eclectic, she also says she has been surprised to find that it hasn’t been easy to sell Myriad’s female authors to French publishers. So, yes, “We do need to keep saying that we’re here.”

In any case, there seems to be growing interest in highlighting women comics artists: Pearlman is involved in creating an upcoming exhibit for the Cartoon Museum on British women cartoonists from the 1970s and 1980s. And Gravett says the museum in Angoulême is “trying to figure out how to respond to the recent controversy and they’re looking at the concept of our exhibition.

“There’s also interest on the part of Australia and Italy about an exhibit that could be replicated. Each country can unearth artists, as we were able to do, and connect the current heritage with a legacy. I hope this can be replicated internationally.

“The aftereffects of Angoulême are spreading,” Pearlman says, “and hopefully the issue will become not just about women but about diversity in general.”