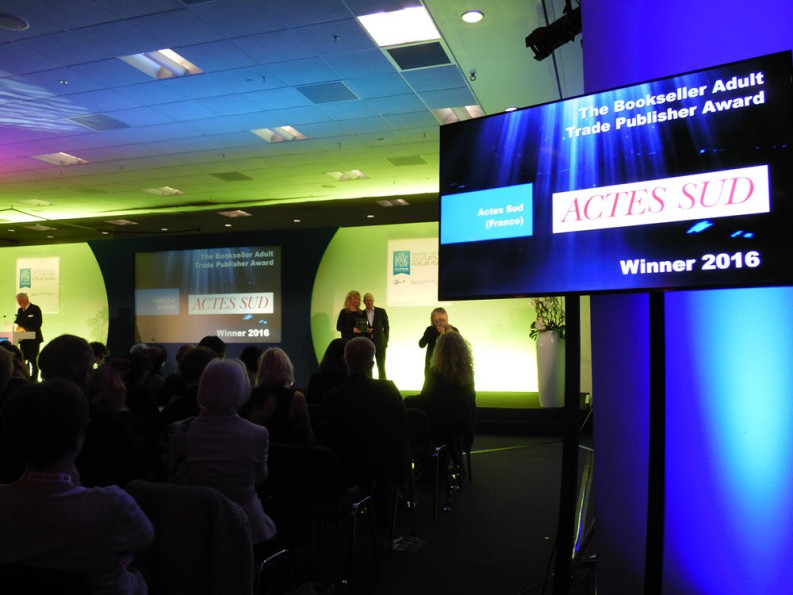 At the close of London Book Fair’s first of three days at the Olympia London Complex, winners of the Fair’s International Excellence Awards have been announced, in association with the UK’s Publishers Association. The sponsor for the awards this year is Hytex.

In the most extensively celebrated award of the evening, the Baroness Gail Rebuck, DBE, Chair of Penguin Random House UK, was given the London Book Fair Lifetime Achievement Award. [Read Rebuck’s keynote address to the Quantum Conference here.]

In a new and popular category this year, Bookstore of the Year went to Melbourne’s Readings, commended in Monday evening’s ceremony (April 12) “for “its community outreach, support of Australian authors and its help for non-profit organisations working on literacy initiatives.”

French publisher Actes Sud took home The Bookseller Adult Trade Publisher Award and was cited for its “depth and breadth of publishing, second-to-none design and production values, and a ground-breaking list”. The judges also praised its imprint Sindbad “which champions writing from the Arabic and Muslim worlds.”

“The awards represent the very best the publishing industry has to offer across the globe, and we were delighted to see winners from countries as far afield as Sudan, France, Poland, New Zealand and Brazil.

“For me, meeting and celebrating these publishers’ hard work, dedication and talent is such a fundamental part of the Book Fair,” Thomas said. “It is these inspiring companies and people around the world who make publishing such a special industry, that I am privileged to work in.”

Stephen Lotinga, who recently has taken up his post as chief of the Publishers Association, said:

“The International Excellence Awards provide an incredible opportunity to recognize achievements within the publishing industry globally. It showcases the wealth of cultural diversity driving the production of enriching works enjoyed by people worldwide.

“From France to New Zealand, from Sudan to China,” Lotinga said, “the commitment and dedication demonstrated by the publishers has been none other than inspirational and it has been an honour to hear their stories and celebrate as part of the London Book Fair.”

In each award category the judging panel was made up of experts in that sector.