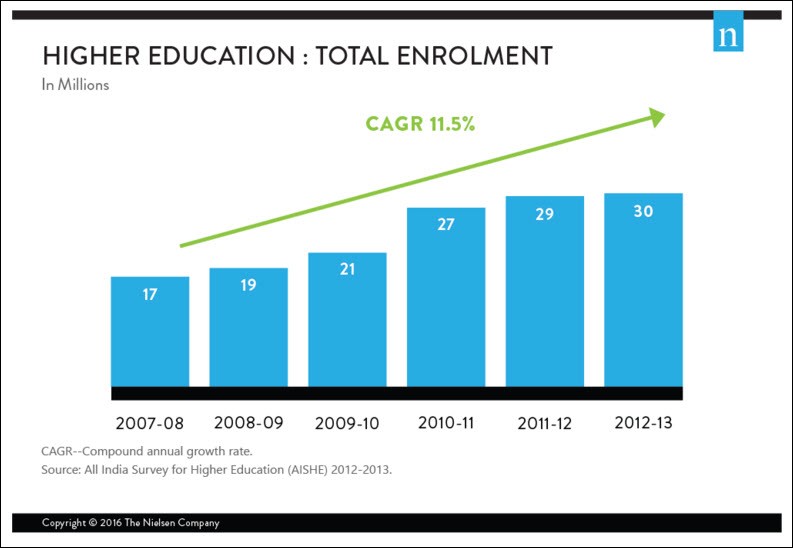 A potential 90-percent literacy rate meets 22 languages — 1,600 dialects and regional languages — in India. Where is its book market’s tipping point? A ‘Vibrant, Influential, and Significant Sector’

A 2009 National Youth Readership Survey shows that three out of four Indian youths are now literate, while 25 percent of that population (that’s 83 million people) are self-identified book readers. And by the end of this decade, the literacy level is expected to be 90 percent.

By the end of 2030, it’s projected that India will be the world’s most populous country. And with a GDP that’s increased at a rate of 8.6 percent each of the last three years, India now has the world’s fastest growing economy.

Put all of that together, says an Insights report from Nielsen, and it “has huge implications for the global book industry.”

This is why Nielsen Book has issued The India Book Market Report. Which, “in addition to reviewing the economic parameters of the publishing industry and the size of the book market, also looked at governmental frameworks and policies, and the impact of amended laws on book publishing, book-buying behaviours and book consumers’ characteristics across different types of publishing.” From Nielsen report “India’s Book Market Is Poised for Growth”

Among the report’s findings:

While reading for “pleasure” is an important part of the market and should show increased growth, school books still make up the majority of the overall book market. In fact, “purchases of K-12 school books are estimated to account for some 71 percent of the market, with higher education books accounting for an additional 22 percent.”

In fact, “Nielsen’s forecasts for market growth in the educational book sector show this already extremely significant market growing by some 19 percent over the next five years, predicated both on ever greater numbers of children entering school—and remaining there longer—and more parents able to afford the resources to support them in their learning needs.” From Nielsen report “India’s Book Market Is Poised for Growth”

And while the unique features of India’s demographics in terms of a growing population, especially of young people who are literate and educated, “presents tremendous opportunities for the growth and expansion of the publishing industry in all sectors,” these opportunities are not without their challenges. Consider for example: India has 22 official languages, a figure which, combined with regional languages and dialects, climbs to more than 1,600.

Adding to that is the fact that brick-and-mortar bookstores are now facing increased competition from online retailers, which are often, “attractive on both range and price to an increasingly mobile population.”

And with the vast size of the country, along with the “inefficiencies and costs involved with poor infrastructure,” this can make “distribution of large volumes of books to all parts of the country a logistical problem for publishers.”

Even so, as Nielson summarizes:

“Despite the many challenges faced by the book market in India, however, the industry is fast expanding, creating jobs and contributing to the education and literacy of the country. Those working in this vibrant, influential and significant sector believe it is now time to receive ‘industry’ status so that the book trade can gain financial support and work more closely with the government in furthering the overall development of the country.”