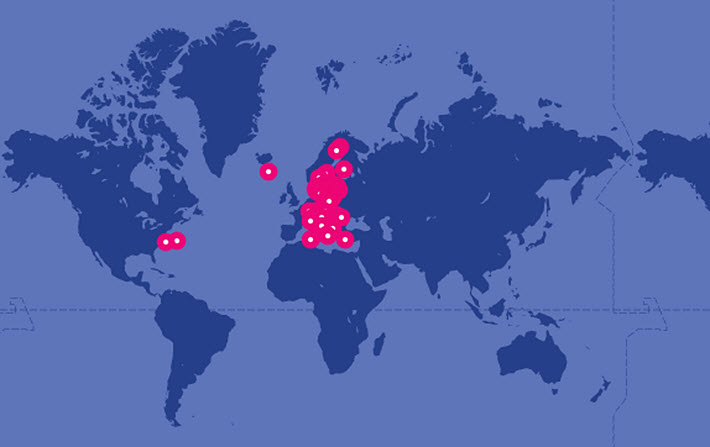 Listing 53 world “cities of refuge” and 115 writers assisted with protection, ICORN looks at its success to date and needs still unmet. This map, from the ICORN website, indicates cities participating in the organization’s program of protection for writers and others at risk.

While we were sorry that the Bangladeshi publisher Ahmedur Rashid Chowdhury wasn’t able to join his panel on “Publishing in a Time of Fear” at the International Publishers Association’s 31st Congress in London, we’re glad to note that “Tutul,” as he’s known, is living safely with relocation assistance provided by the Stavanger-based International Cities of Refuge Network, or ICORN, which is observing its 10th year of operation. — Porter Anderson

‘We Also Remember All Those Who Are Not Safe’

Celebrating its 10th anniversary this month, the International Cities of Refuge Network referred to as ICORN provides both temporary and permanent safe residencies to writers, publishers, journalists, and other artists at risk.

Among them is Bangladeshi publisher Ahmedur Rashid Chowdhury (popularly called Tutul) — who was scheduled to appear on a panel of the International Publishers Association’s (IPA) 31st Congress at London Book Fair but was unable to be there. He was one of five shortlisted figures under consideration for the IPA’s newly renamed Prix Voltaire, which went to Raif Badawi during congress events at #LBF16.

As we reported last year, Chowdhury, who launched his publishing company Shuddashar in 2004, was attacked in his office by a man wielding a sword. As reported by John Keenan last week at The Guardian, Ansar al-Islam, the Banglahdesh division of al-Qaida in the Indian subcontinent, later claimed responsibility for the incident.

And now, thanks to ICORN, Tutal has found refuge in Skien, Norway.

Marianne Hovdan, Programme Officer in ICORN, said on their website: “The situation for bloggers and other freethinkers in Bangladesh has become increasingly difficult during the past year.

“ICORN has experienced a massive boom in applications from Bangladeshi bloggers and editors, counting 28 applications within the last 13-14 months.

“Tutul is one out of two who have been granted a residency in an ICORN city.

“We are happy that we have been able to offer him a residency, in cooperation with Skien City of Refuge, where he can continue his work in safety.” “At present Bangladesh, in the case of free thinking and publishing, the lives of Bloggers, Writers and Publishers are full of uncertainty.

“The main thing about Freedom of Speech is the change of people’s thinking and mentality. It’s also one of our duties to remove the rules made by the government, which is against freedom of speech. For this we have to create more awareness.

“The ancient weapon of awareness is writing. And if there’s no fear of physical attack, then one can fight in this war of writing from any place of this world.”

Since ICORN’S launch in 2006, more than 50 cities have joined the network, and more than 150 writers and artists have been given safe haven.

Asieh Amini, a prominent Iranian poet, journalist and human rights activist, tells Keenan at The Guardian that she sees ICORN as an ambulance. “It takes you from a bad situation to a better one,” she said. “But after that, it is up to you.”

Amini was jailed after she reported on the case of a 16-year-old girl who was sentenced to death by stoning. After her release, she fled the country and with ICORN’s help found residency as a guest writer in Trondheim, Norway.

She said: “When I arrived in Trondheim it was like a dream to me but you have to wake up. I learned a new language because without that you cannot be part of the culture. More cities must join ICORN. We have a lot of rich and safe cities. They can support writers and artists and the writers and artists can help the cities to think better.”

On ICORN’s website, its Executive Director Helge Lunde is quoted as saying: “It cannot be stated clearly enough: The creation of ICORN and the celebration of its 10 year anniversary would make no sense, or rather, it would and could never had happened, if it was not for the incredible strength, courage and creativity exhibited by the many fighters for human rights and freedom of expression around the world.

“The diverse and creative ways they enrich, inspire and challenge their host communities are indisputable. ICORN writers and artists are continuing to work for change in their home countries, often more comprehensively and effectively than they could before leaving.

“It is more important than ever to stand together for the human right to freedom expression all around the world, as it is the basis for all other freedoms. As we celebrate the 10 years anniversary of the founding of the network, we also remember all those who are not safe or have paid with their lives in their struggle for change and freedom of speech.”

Much more coverage of events related to last week’s London Book Fair and associated issues is in our Spring 2016 magazine.

If you weren’t with us at #LBF16 to pick it up, download it here free of charge as a PDF.

And be sure to see our coverage of the International Publishers Association’s 31st Congress in London and the IPA’s choice of Saudi Web publisher Raif Badawi as recipient of the Prix Voltaire, as well as a look at the seven vibrant publishing markets to be featured in October this year at Frankfurt Book Fair’s The Markets Conference. (Note that Early Bird rates end April 30.)