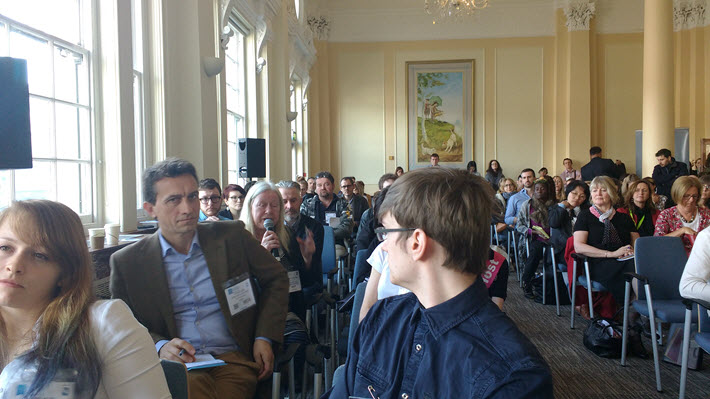 How pure a play is crowdfunding? As Unbound’s John Mitchinson says, “We still decide” which books are taken forward. And #LBF16-goers crowded a session on it. It may not be the stuff of Elias Canetti’s Masse und Macht (Crowds and Power)…or maybe it is. It’s fitting that one of the panelists in London Book Fair’s session on crowdfunding in publishing is a co-founder of the UK’s proudly successful Unbound.co.uk. As John Mitchinson and his colleagues put it, “Books are now in your hands.” — Porter Anderson

‘To Get Involved in Curating’

“My co-founder had published 10 books over 10 years. And for the first time he had hit a brick wall. His book had been turned down by many publishers – with one even describing it as a little too intelligent for the market.”

Crowdfunding is the practice of funding a project or venture by raising money from a large number of people, usually through the Internet. In the case of publishing, crowdfunding platforms publish the books as well. “Without a degree,” Mitchinson went on, “my co-founder was facing having to go back to the kind of low-paid job he did when he was young. There were half a million people who bought his books, but he had no idea who they were. Meanwhile, I was writing scripts for QI and I had sworn not to return to traditional publishing due to all that bad karma from spending your time saying no or telling lies.

“However, I discovered Kickstarter at a very early stage and after sitting in a pub with my co-founder, 18 months later we had a Web site to solve this problem for writers.

“Now it has become a global business, with 15 projects a month, 122 successfully funded and with over £2m in total pledge revenue, with rewards that can range from an hour’s coaching in real tennis for £500 to dinner with a writer for £1,000. The busier the site is the more projects funded. The more engaged the author is the more the book will be funded.

“In real time, using geotagging, we can tell who is giving money, how much and where – even how much money each tweet generates. Our big data James Bond like dash board goes gold if £10,000 comes in in one day. When JK Rowling gave £5,000 towards Nikesh Shukla’s The Good Immigrant everyone cheered. Turning to the Crowd

According to chairperson Angus Phillips, Director of the Oxford International Centre for Publishing Studies, “there is clearly an appetite amongst the audience to get involved in curating content at a very early stage.”

The question the panel was trying to answer was how are authors and publishers trying to leverage this. While some of Kickstarter’s greatest successes have included exploding kittens and zombie board games [not forgetting Occulus Rift], over $22m has been raised for publishing projects, making them the third most popular category, according to Phillips.

The seminar drew its name from the book The Wisdom of Crowds: Why the Many Are Smarter Than the Few and How Collective Wisdom Shapes Business, Economies, Societies and Nations. Published in 2004, James Surowiecki’s classic argues that the aggregation of information in groups leads to decisions that are often better than could have been made by any single member of the group. And the Internet turns out to be quite good at creating these groups or communities. Out of this came the idea of crowdfunding as an alternative to traditional finance, and crowdsourcing as an alternative to asking the usual suppliers of services.

There are two main types of crowdfunding: through rewards such as dinner with the author in exchange for funding; or equity, which usually means a share of equity, but in publishing tends to mean a share of royalties. It usually involves the proposer, a platform like Kickstarter or Unbound, and the individuals or groups who support it.

Crowdsourcing is the process of acquiring services, ideas, or content by asking for contributions from among a large group of people rather than traditional sources of finance.

Like Mitchinson, Enrique Parrilla, whose tells us that company is experiencing 35-percent annual growth, says he “wants to meet needs that the traditional industry doesn’t fulfill. “Publishers would often say to us that we have 60 years of experience – but it is really only one year of experience repeated 60 times, as they haven’t learned much. When we went into their offices their would be a huge pile of manuscripts, so our task was how to take books from this pile to the bookshop. After all, Harry Potter was rejected 12 times and Carrie by Stephen King 30 times.

“Kickstarter caused controversy when the funders of Oculus Rift got nothing, when the company was acquired by Facebook for $2 billion. How could we do it better? We decided to give the backers a proportion of the rewards. At Pentian, the author receives 40 percent, the backers 50 percent.

“Like Unbound, we have a dashboard to monitor the funding coming in from a Twitter link or Facebook page. We also started to notice really interesting behaviour, as people would come in to pledge for one project and then browse the site before pledging to some more projects.

“Sixty to 70 percent of our books are Spanish and 30 percent are English – which is growing in the USA. Where we have most of our success is in markets like Chile and Ecuador, which kind of makes sense as these are markets where most authors have no access to funding or distribution.

“Getting a book into a book store isn’t a challenge – we use print on demand; getting it funded is. By using statistical analysis and genetic algorithms [a form of machine intelligence that mimics the way humans make selections] we can start to predict which books are going to be successful and which aren’t.

“We don’t censor anything as long as it doesn’t break any laws. We have no quality control. We let the market decide [gasps in the audience]. It is the wisdom of the crowd.”

In the end, Mitchinson says, “I would like to think that we would like to let the market decide, but we still decide what projects can go on our site by whether it’s breaking any laws, its general level of competence, or what kind of existing network the book might have.

“It is the paradox of the Internet that if you are the author you want everyone to have access to what you have written, but as the customer you want someone to do some curation for you.

“Ultimately it is democratizing, as the world where there is a group of people called authors and publishers is dissolving as people are programming their own entertainment.”

Meanwhile, Jan Kasprzycki-Rosikon, Managing Director of MillionYou, used the crowd for more than 100 projects last year to help brands to build a community and to begin the process of co-creation with them, ranging from soft drinks to health care. “In all these cases our first step is to create a community from 200 to 30,000 in size; then we give them a challenge to solve to generate ideas, which we then analyse and decide on their application.

“If you have 10,000 people working for you, why not engage them by asking them for ideas? Deloitte in one office used crowdsourcing to get 300 people engaged in originating new ideas.

“We encouraged consumer activation by asking amateur video makers to come up with video content to promote Lion Bars and in a few weeks we received 170 scripts and 150 videos. That’s more than 300 ambassadors for the project.

“For Anders’ Army by Norman Davies,  much of the material was in private collections, so using the idea that anyone can become a history researcher we created a Web site a year and a half before the book was launched to encourage people to post material up on our website, even if it was just one picture. In the end we received 2,000 never-before-published photos.” [Anders’ Army was name given to the forgotten story of the 25,000 Polish soldiers in the Second World War who were evacuated overland from the Soviet Union through the Middle East.]

So whether it is to generate publicity for a book, motivate your workforce or reach out to authors that traditional publishing has forgotten, perhaps it is time to trust the wisdom of the crowd rather than to fear it.