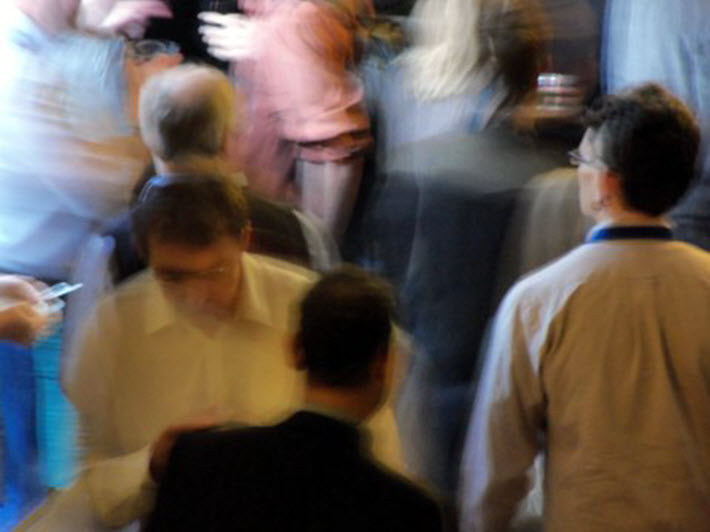 ‘This is the edge of the future of publishing’: Peter Brantley on the future of the industry and of Books in Browsers, with BiB VII scheduled for November 3 and 4 in San Francisco.

A coffee break at Books In Browsers 2012 in San Francisco. Image: Porter Anderson

Look back at the 2013 description of the Books in Browsers (BiB) conference, that year at the Internet Archive: “Books in Browsers,” the text read, “is a small summit for the new generation of internet publishing companies, focusing on developers and designers who are building and launching tools for online storytelling, expression, and art.” Today (April 29), BiB “convener” Peter Brantley joins the Publishers’ Forum conference in Berlin by remote. Brantley is here to brief us on the “pivot” that BiB is making in November, as one of the most innovative and important conferences of the year. In the middle of the California high desert, a 19th century gold rush era mining town is coming back to life. Combining 360-degree views and historical photographic records, an immersive visual replica of Bodie, California, is being drafted – both what it was like in the 19th century, and what it is now – with the viewer able to toggle between the two, hearing the sounds of the gold stampede, or with a flick, the quiet of the modern desert.

Using images, immersive video, and short fragments of text, artists, historians, poets, and filmmakers are creating new experiences that inform, entertain, and speculate. The birth of this storytelling, and the creative use of a wide range of visual platforms ranging from Instagram to Snapchat, is why the Frankfurt Book Fair is pivoting the Books in Browsers conference from leading edge explorations of book design to wildly different forms of visual storytelling.

This is a storytelling world of many small pieces.

Pictures, pieces of texts, short segments of VR, Streetview, and even animated gifs: we’re weaving these recordings and impressions together to create new forms of both art and scholarship. Shield5, a narrative film in many small parts, has been published in Instagram, and the Los Angeles County Musuem of Art is telling stories about their collections in Snapchat. These new forms of media production are reshaping how we communicate.

BiB VII, the next edition of Books in Browsers, examines the growing ability of users to tell small stories using self-curated, loosely coupled forms of media, increasingly created or made to be utilized on mobile devices, and addressable on the network. In the last two years, the number of visual media platforms that enable users to create narratives combining texts, images, videos, and immersive content into distinctly new forms of conversation has grown exponentially. Ranging from Instagram to SnapChat, Periscope to YikYak, these mobile-first tools afford a level of immediacy, intimacy, and empathy that traditional “publish-and-leave” platforms such as trade and scholarly publishing, or even blogging, cannot approach.

Mobile creative tools are migrating us away from passive consumption of traditional streaming applications such as Twitter or Facebook, to more carefully curated, push-based channels.

For individual users, channels personalize content recommendations that push relevant stories, rather than relying on a go-to-the-source passivity. Established publications ranging from the New York Times to National Geographic now place their content directly on channels ranging from Facebook Live to Snapchat Discovery, sharing the same space that their readers are using to create their own stories.

This is the edge of the future of publishing, and we hope you will join us for Books in Browsers: Telling Small Stories in San Francisco, November 3-4, at the Gray Area Foundation for the Arts.

Peter Brantley directs the  University of California Davis Library’s online strategy and, previously, was Digital Director with the New York Public Library and has worked extensively with the Internet Archive and with Hypothes.is. His first presentation of the Books in Browsers conference was in 2010.

We’ll have more on Books in Browsers here at Publishing Perspectives, as plans for this year’s iteration of the event come together.