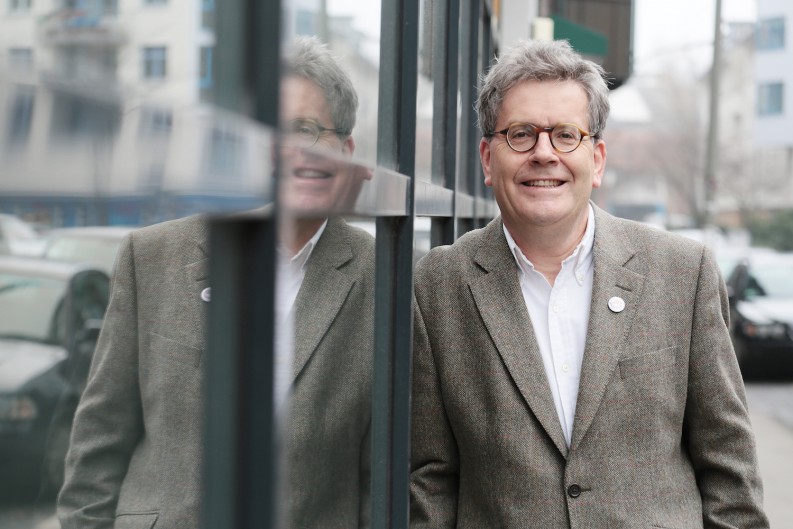 A children’s book publisher with passion and purpose, Klaus Humann talks about the Harry Potter high, the spirit of small publishing houses, and his global search for special books. There’s no question that Klaus Humann, Publisher of Aladin Verlag, is passionate about children’s books and about illustration in particular. His innate curiosity has led him on a surprising and successful career path. Starting in nonfiction adult publishing, then riding high on global success of the Harry Potter and Twilight series, Humann is now on the lookout for unique children’s books and surprising illustrators.

“If I publish books that could be number one in a lookalike contest for other successful illustrators, that would bore me,” he said, in an interview with Publishing Perspectives.

Aladin Verlag, based in Hamburg, publishes 28 children’s books each year.

Humann did not start out wanting to be a children’s book publisher, but the arc of his publishing career led him to discover his passion for combining art and stories to create new and interesting children’s books.

After twenty years working in adult books, mostly nonfiction, Humann was asked to start a children’s publishing program at Fischer Verlag in Frankfurt. This was in 1993, he says. He worked there for four years before Hamburg-based children’s publisher Carlsen hired him to run the company.

During his 15-year tenure there, Carlsen grew from 35 people to over 130 people.

“We were not a big publishing house [when I started], but we became the largest children’s book publisher in Germany through buying the rights to Harry Potter and then … the Twilight series as well.”

The transition from small to large company wasn’t always easy, but “it was a lot of fun.” The quick success of the Harry Potter books put the small team under a lot of pressure to handle the growing workload that the international hit series demanded. “All in all, we sold roughly 33 million Harry Potter books and 10 million Stephenie Meyer books in Germany,” recalls Humann.

As the company grew, Humann spent more time in meetings and dealing with finances, marketing and staffing—and less time working on the actual books. After 15 years at Carlsen, he said, “I got tired of running a big company.”

The Launch of Aladin Verlag

“I love this job of editing; I love this job of discovering illustrators and authors,” so he asked Carlsen’s parent company, Bonnier, if there was anything else they could offer him, “something smaller” in which he could focus on the books.

Bonnier offered him the money to start his own publishing house, and Aladin Verlag launched in 2012. The first books were released in 2013. The five-person publishing house today focuses on 28 children’s books a year.

“The pressure is now big as well because we have successes but we are still losing money,” said Humann. “The pressure is entirely different from what I knew at Carlsen.”

The Creative Freedom of a Small Publishing House Aladin enjoys the enviable position of being creatively independent yet also financially and operationally supported by a larger publishing group. One of the most important parts of this arrangement, notes Humann, is that Aladin books are distributed by Carlsen.

“We [in Germany] have quite a few independent, smaller children’s book publishers with wonderful programs, but they always struggle to get their books into the bookshops and bigger chains … This is something small publishing houses can’t do, and we can do it through people at Carlsen.”

With some of the operational burdens being managed by Bonnier, the team at Aladin has time to focus their attention on the authors and illustrators who come through their doors.

Humann’s creative freedom with Aladin’s publishing program means he can look for strange and surprising illustrators, for books that are truly unique. “We’re always looking for something different, something special,” he said. “We work with the best German illustrators, and from abroad we have Peter Sís, Maurice Sendak, David Wiesner, Shaun Tan on our list,” as well as Lauren Child, Patrick McDonnell, Benji Davies and others.

“If you ask the distribution people, they always tell you, ‘could you do a book like so-and-so?’” laments Humann. “But I would much rather publish books that you can’t compare to anything on the market. If you look at the successes like Jon Klassen, Lucy Cousins or Lauren Child, they’re all illustrators who brought something entirely new, and this is what people are looking for.”

The publisher’s search for unique books has also led to success. In many cases, Aladin’s books sell around 4,000 copies, “which is not bad for a much smaller market than the US,” said Humann.

“It shows me that it really pays off taking risks, at least for a small publishing house. Otherwise you have to ask, why are you publishing books? Why aren’t you working at those bigger publishing houses if you’re publishing the same books they’re doing?” Humann, like other German children’s book publishers, is hopeful that the extra exposure in Bologna this year (Germany is the 2016 Guest of Honor at the Bologna Book Fair) will lead to more international interest in German illustrators and authors.

According to Humann, there is an historical context for this ongoing effort to gain international traction for German titles that explains why Germany imports so many translations but manages to sell so few.

“Those people who started building up publishing houses after ‘45, after we lost the war, they thought, ‘We have to open our programs to all countries of the world. We have to give German children the opportunity to see what’s happening outside Germany, to learn about human rights, about democracy, about all of those values we haven’t had for all those years during the Nazi dictatorship.’ So from this history, we were always very open to translating books from all other countries.”

Germany, one of the largest book markets in the world, is known for the number of translations it publishes. According to the German Publishers and Booksellers Association, translations make up over 12% of the trade titles published each year (more if you don’t count reprints and reissues), a figure that’s held steady since 2008.

Yet, Humann laments that the flow of translated books doesn’t go both ways. It’s a problem familiar to many publishers trying to sell translation rights abroad, though Humann sees a distinct lack of German books getting picked up internationally. “On the other side, it was very difficult to sell [German] books abroad. It’s probably much easier for a Dutch, Swedish or French publishing house to sell their books to other countries. It’s much more difficult for us, for example, to sell to European countries, or almost impossible to sell it to English or American publishers. This is changing a bit, but only with smaller publishing houses in England and America.”

Humann’s spark of optimism about the improving translation sales is bolstered by the number of fantastic illustrators working in Germany today. He talks about the “treasure of illustrators in Germany,” people who have talent that “really can travel.”

Aladin will exhibit a number of its books and illustrators in Bologna this year, most notably Thomas Müller, ATAK, Hildegard Müller, Ole Könnecke and Anja Mikolajetz.

“I think there is a chance of now realizing what wonderful illustrators we have in Germany. If you look at the list of the ones who are exhibiting [in Bologna], you see that lots of them have a foreign background. Even in German illustration, it’s not all German. It’s an interesting mix of people coming from Eastern Europe, Turkey, Southern Europe and the Middle East … There isn’t a German style any longer.” One of the latest books to come from Aladin Verlag is a kind of showcase of the best German illustrators today. It’s called Das Beste von Allem (The Best of Everything), and it was edited by illustrators Jutta Bauer und Katja Spitzer. This book is a compendium over 900 illustrations from 60 German illustrators. The double-spreads showcase the work of multiple illustrators and over 50 subjects.

“It is possible, even if you are coming from Germany, to find an illustration language that can be a worldwide success,” he said. “I think there are a number of other illustrators who have the potential to sell abroad. So this is really a big change for us.”

In his work with fantastic illustrators and authors, and through his perspective on decades of the publishing business, Humann has found something that many people are still searching for: purpose.

“The good thing is you’re doing something worth while for society,” he said, “because if you bring the best stories to children then it’s going to be a better world—at least this is what I hope … There’s still hope that with good stories, there are better children, better people, and better human beings.”