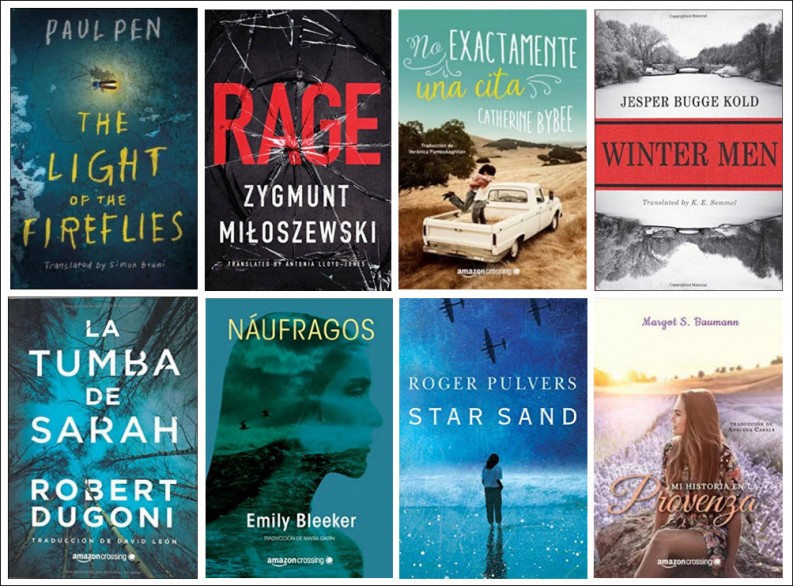 With a sharp eye for languages ‘under-represented in translation’ and a huge response to its call at Frankfurt Book Fair for submissions, AmazonCrossing, the new leader in translation publication, arrives at LBF in rapid expansion. ‘Translation Is an Extraordinary Art’

Every time we run into AmazonCrossing at a major trade show, the imprint is doing more, in more places, with more authors, more languages, and more titles than before.

This week at London Book Fair, you’ll see a series of Literary Translation Centre seminars sponsored by the company. One drawing a lot of interest, for example, is Wednesday’s “Translator as Activism: from Politics to Cultural Change, How Translators are Changing the World Through Their Work.”

And at the next big trade show — May’s BookExpo America in Chicago — when Poland is the Market Focus guest nation, the author Zygmunt Miloszewski will travel to the States: his thriller Rage, No. 1 on Polish bestseller lists for months, is to be published in English in August by AmazonCrossing. Crossing is one of Amazon Publishing’s 14 trade imprints (not a part of the self-publishing platform), and the company last strode the trade show floors at Frankfurt, where APub’s international chief Sarah Jane Gunter announced a US$10 million allocation of funds to facilitate open submissions of work to AmazonCrossing.

“We’re delighted with the response,” Gunter says. “We’ve received more than 1,000 submissions” since the October inception of the open submissions program,

“One of our goals was to find work in languages that are traditionally under-represented in translation.” Talk about getting what you ask for. Bear in mind that prior to the open-submissions initiative last autumn, AmazonCrossing was working primarily in English, German, Spanish, French, and Italian.

Now? Here are some of the languages the team is encountering, leading to potentials for some fascinating language-translation pairs:

A recent release, Winter Men, is a critically praised novel by the Danish author Jesper Bugge Kold, just released by AmazonCrossing in both German (translator Patrick Zöller) and in English K.E. Semmel.

There’s no slowing down, either. AmazonCrossing’s submissions portal is still wide open at translation.amazon.com/submissions, and Gunter tells us that the imprint already has acquired two books.

One is by the Greek author Lena Manta, Gunter says, who has sold more than a million copies of her books in Greece. The House by the River is the title AmazonCrossing will produce in 2017, “a beautiful family story,” Gunter says.

“And we’ve also acquired a book called Elijah’s Chair, by a Croatian author named Igor Štiks,” winner of the Gjalski Award for Best Fiction Book of the Year in Croatia and Kiklop Prize for the best literary work of the year 2006, Gunter says.

“This is just what we wanted,” Gunter says, “the best in contemporary literature from around the world.”

And she says that authors, publishers, agents, and translators are making the submissions.

As an example, Gunter points out that the work of Paul Pen, the Spanish author who won the 2014 Gonzoo Prize for author of the year from the Spanish newspaper 20 minutos, was submitted by translator Simon Bruni. The Light of the Fireflies was released on the first of April.

Translator Bruni, based in the UK, is an example of one of Gunter’s main interests in AmazonCrossing’s success, she says: the chance to hold up the good work of translators.

An example of this is the American author Robert Dugoni’s My Sister’s Grave, which AmazonCrossing will publish in May in Spanish with David León’s translation, as La Tumba de Sarah. Through other translations of the book from AmazonCrossing, Dugoni has become a No. 1 bestseller in four territories, “and now he has the potential for this in Spain, too,” Gunter says.

Another is author Catherine Bybee, “who’s a contemporary romance writer,” Gunter says, “and we’ve already translated eight of her books into German, French, Italian, and Spanish. We’ve been translating into German for the last three years no. So we’re staring now to bring more American and British authors into German as well as Italian, Spanish and French.

“As the Kindle business grows and we get more feedback from readers on Kindle, we have ideas about other books that have been received well in one territory” and can deepen a growing network of content crossing borders, track records in place. “Bob Dugoni has now worked with four different translators,” she points out.

Two Lessons in Rights and Assumptions

“One thing we’ve learned,” Gunter says, “is that great stories can come from anywhere.” Previously neglected territories, she says, may be exactly where to look.

“And another point in our own rights experience is that we’re having great success with genre fiction.”

This is one of the most consistently remarked-upon  points of the AmazonCrossing approach: where for so long translation has been limited primarily to writers of literary fiction, Gunter’s team works in popular genres happily, pointing up her frequent line, “A good story is a good story.”

As early as London Book Fair time last year, Crossing was reported by The New York Times’ Stephen Heyman to be taking the lead in translation output. Translation specialist Chad Post at the University of Rochester had confirmed that while Dalkey Archive, Seagull Books, Europa Editions and Gallic Books were still producing robust lists, AmazonCrossing had surpassed them all.

And in an industry that can find many things it doesn’t appreciate about Amazon and its presence on the publishing scene, Gunter’s AmazonCrossing is a story with a lot of good news.

Four AmazonCrossing titles were longlisted for major prizes in 2015, including two for the Impact Dublin Award, The Perfect Landscape by Ragna Sigurðardóttir with translator Sarah Bowen and Ten Women by Marcela Serrano with Beth Fowler translating.

Translation is getting new wind under its wings, and print as well as digital is always available, Gunter likes to remind us: “You know Amazon has a physical bookstore now.”