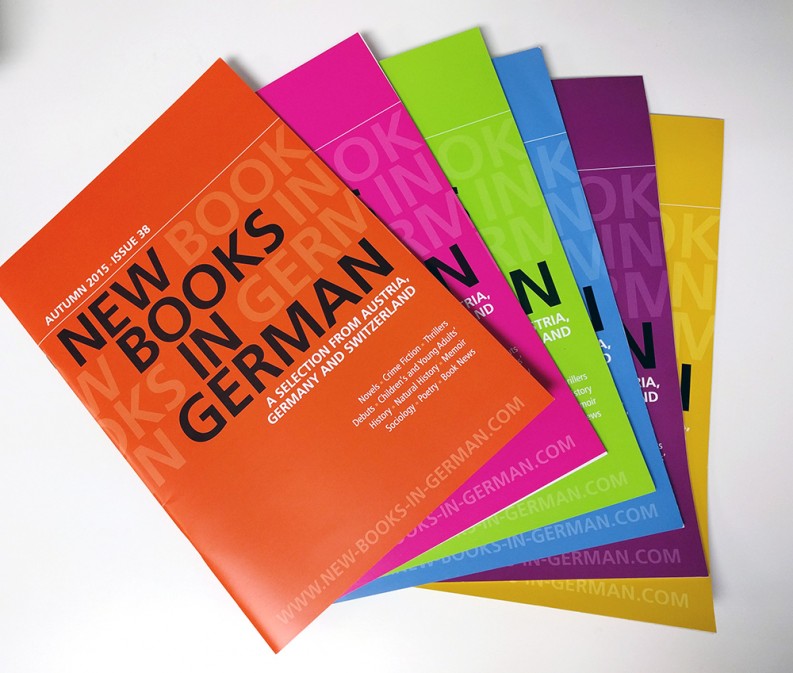 For twenty years, journal ‘New Books in German’ has provided insight and guidance about German literature to editors and publishers from around the world. “I still remember when the first issue of New Books in German was circulating around the Frankfurt Book Fair in 1996,” said Bärbel Becker, Director of International Projects at the Frankfurt Book Fair and member of the New Books in German steering committee. “It was launched by the late Rosemary Smith, a British translator of German literature, and by literary agent Tanja Howarth. The two of them created quite a buzz among German publishers.”

Celebrating its 20th anniversary this year, New Books in German (NBG) is a bi-annual journal of contemporary German literature aimed at publishing professionals in the US and UK. Each issue includes essays from translators and literary figures as well as a highly curated list of internationally attractive titles from Germany, Austria and Switzerland.

Pick up the latest issue of New Books in German at the London Book Fair — German collective stand 6D35 — or online here.

NBG will release its anniversary edition, Issue 40, in time for the Frankfurt Book Fair this fall. The team is also planning a celebration timed to take place around International Translation Day (September 30), which will include a program of German, Austrian and Swiss writers.

“We want to celebrate 20 successful years and to draw new and old supporters of the journal together to further strengthen the project,” said Jen Calleja, Acting Editor of New Books in German while Editor Charlotte Ryland is on maternity leave.

Issue 39 of NBG, available at the London Book Fair, will focus on women writers and feminism. “It’s an extremely strong issue with articles on women in translation,” said Calleja. The issue includes an essay by German-to-English translator Katy Derbyshire, as well as interviews with translator Susan Bernofsky and German authors Jenny Erpenbeck and Karen Duve.

“Many of the books we selected to review for this issue also explore migration—in some instances at the intersection of gender,” explained Calleja. “You can see this in the books by Abbas Khider, Katharina Winkler, Meral Kureyshi, Jan Böttcher, Michael Köhlmeier, and the children’s book Im Jahr des Affen (In the Year of the Monkey).”

Looking Back on 20 Years “I can’t separate NBG’s impact on German-language literature from the major developments in the world of translated literature over the past twenty years,” said NBG Editor Charlotte Ryland. “The work that we do promoting German-language books has both fed into and benefited from that sea-change: increased visibility for ‘foreign’ literatures across the board.” Still, there have been plenty of success stories that came from the pages of New Books in German.

“Our very first issue back in 1996 included a feature on the ‘forgotten’ classic Hans Fallada, author of Alone in Berlin, a book which has since become a global bestseller,” said Ryland. “Similarly, in 1999 we praised ‘a notable debut by an author of outstanding promise’: Jenny Erpenbeck is now acknowledged as one of the best contemporary writers anywhere in the world today.”

Support from the German Community

The list of supporters for NBG is a long one, including consulates, cultural organizations and associations. The Frankfurt Book Fair and the German Book Office New York were involved early on and continue to provide various forms of support.

“For the Frankfurt Book Fair, translation is a central issue,” said Becker. “We are involved in NBG to promote our own language and because we believe in translation and the exchange of literature. Like the Goethe-Institut, the Frankfurt Book Fair has supported NBG since it launched. In the last five years, Frankfurt has become a sponsor of NBG, and through our cooperation, the journal now has a much wider international reach.”

The German Book Office New York, a satellite office of the Frankfurt Book Fair, has been the US partner of NBG since 1998. “In 2011, we took the relationship to a new level and were able to add a US voice to New Books in German as well,” said Riky Stock, Director of the GBO New York. This additional cooperation includes a US jury of editors, scouts, booksellers, critics and colleagues at the Goethe-Institut New York. Their job is to select German-language titles they believe are most appropriate for the American market.

In 2013, the GBO and NBG jointly put together a list of German books that have been successfully translated into English called “50 Books That Travel.” You can find this list at international book fairs where Frankfurt organizes a German collective stand.

“Knowing that there is a translation grant available for a specific title can often seal a deal,” said Stock. “Most translations in the US are published by small publishing houses with small margins. For these publishers, a grant can be the deciding factor for an acquisition, especially considering that literary translations typically sell only a few thousand copies.”