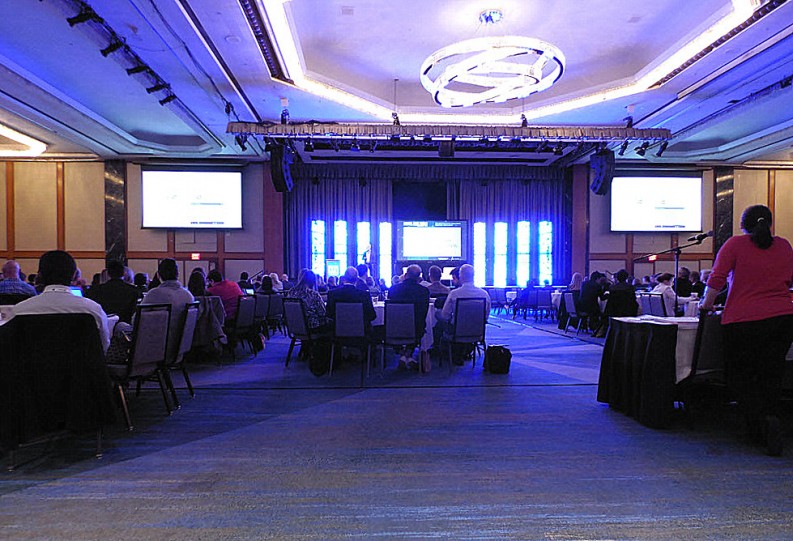 Both instructive and incredulous at times, this year’s Digital Book World is off to a start led by inquiry, guidance, online tips and tricks, and a pressing question: what’s next? The Bookish Industry ‘Interacting With a Digital World’

Almost a bit shell-shocked, the tone of this year’s Digital Book World Conference + Expo (DBW) in New York City has an air both of resignation and of bafflement to it. That’s not to say that the official two days  of the event haven’t opened with plenty of expertise onstage and in the audience, far from it. As ever, the grand ballroom at the Midtown Hilton is busy with key players, promising startup entrepreneurs, observant media watchers, and resilient business people.

But conference director Mike Shatzkin’s theme of “transformation”—of an industry now long upended by the digital dynamic—is apt in a curiously palpable sense. Brightly lit glowing panels form the stage backdrop this year, placing speakers in a considerably lower light and immersing the program in a gleaming, backlit conference aquarium.

Tom Bonnick, who swims with the best of them in doing business development for the London independent publisher Nosy Crow, has written a couple of pieces for us, as the fellow sent over by the UK’s Independent Publishers Guild. And in a line from his most recent piece, Bonnick makes the underlying point well:

“This is a conference that’s not just about digital books, but about how our entire industry is interacting with a digital world.”

Simple, but useful, that observation, certainly in Shatzkin’s first day of #DBW16 programming.

The longtime industry consultant and commentator opened by ticking off some of the major gee-whiz changes since the first DBW conference in 2010.

Then he added elements of the current state of the industry, concluding with some of the digital challenges he sees facing the trade today.

It’s worth listing some of his inflection points in a fast constellation of change. Since 2010, Shatzkin told the audience:

By contrast, some of the current market’s highlights Shatzkin pointed to include:

Shatzkin made only passing reference to some of his own most interesting writing of late, which suggests a new narrative on publishers’ relations with Amazon: the retailer might have been the side driving the return to agency pricing on ebooks in the most recent contract negotiations, not publishers.

We paddled on to the challenges that Shatzkin tells us are facing the industry now:

By this point, the introduction had become a list of events on Shatzkin’s program, and we were off. An opening keynote from Annenberg Innovation Lab chief Jonathan Taplin became a call to arms for an Internet far less encumbered with the commercial interests of the major tech powers.

A Hollywood producer of the Scorsese Mean Streets and other films, Taplin sounded enough protest notes to fill backlot, everything from images of the Founding Fathers and Dr. Martin Luther King to privacy, piracy, “coliseum culture” online, and a call for the state to step in and fulfill its “duty to control monopolies.”

Fulfilling such perceived duties is the job of the state in Germany and the European Union, too, and Dr. Jessica Sänger of the Börsenverein spoke to the audience about concerns around Amazon’s dominant market position. Of special interest here were her observations that the authorities in Europe have seemed to have more stomach for questioning restrictive practices than market dominance, per se.

And while many who complain of Amazon’s position in the industry often include a caveat of admiration for the company, as well, Dr. Sänger’s was particularly interesting: she said that Amazon has helped bring professionalism to German markets by creating “tremendous competition.” (Our preview of Dr. Sänger’s comments is here.) In easily the most grounded section of DBW’s opening morning, Ingram Content’s John Ingram spoke with Shatzkin in an onstage conversation with refreshing, comfortable zeal about his company’s ethos in time of such change. While he was at pains to recall the automaker’s slogan — “this is not your father’s Oldsmobile” — it was plainly heartening to hear this executive, fresh from the news of Ingram’s acquisition of Perseus’ distribution operations, saying:

“I really care that Ingram does things the right way. We want to be an honest, ethical company.”

Is that the outline of an “old” value system? While Taplin might say it shouldn’t surprise us that these are rare words, we don’t hear that kind of statement as frequently as we might like in publishing. The Ingram Content approach, Ingram said, is to watch for those moments in which “preparation meets opportunity,” as when, late last year, he made the Aer.io acquisition, as well. The conference was gathering traction in what feels completely earnest this year: uncertainty.

And if his challenge to the assembly was to experiment and harvest the online clues to publishing’s consumer base behaviors, Rodale’s Naples was there to recommend that publishers embrace failure for what they can learn from it (a concept she attributed to Dominique Raccah’s presentations of DBW-past): try, try again, adding:

“I’ve been shocked at how little has changed over the years inside a publishing house…One thing that shocked me when I worked with a startup was the culture…20 times faster than in publishing.” A Publisher ‘Shocked at How Little Has Changed’

Naples reminded everyone of the author Hugh Howey’s “Don’t Anyone Put Me in Charge” posts of a couple of years ago–suggestions for the Big Five in which he selected HarperCollins to stand in for the group of major publishers. She recalled Howey’s opening advice: “The first thing I would do would be the most important, and that would be to form a community among my stable of HarperCollins authors.”

And when she brought together Rodale’s authors in the Howeyan mode, she said, “It didn’t work.” We got no elaboration on that point, leaving one audience member to speculate that trade authors aren’t as given to cooperative engagement as Howey’s self-publishing writers are. But Howey, too, had been talking about trade authors in his column of 2014, so we were left without a sense from Naples as to what might not have worked in Rodale’s attempt to build community among its writers.

Maybe the most daunting part of the morning came at the end as Shatzkin and Barnes & Noble’s Argir tip-toed through an all-but-rehearsed conversation onstage — Argir saying repeatedly “I knew you were going to ask me that” and Shatzkin agreeing that he wouldn’t have wanted to surprise Argir.

As Shatzkin associate Michael Cader is reporting at Publishers Lunch, Argir had this to say about Barnes and Noble’s pullout of Nook’s UK and apps and video businesses:

“It’s important in any business to focus on those things that are profitable for you and we’ve got a lot of things that are top priorities for us. In the case of the UK and apps businesses, these are things we had tried for several years. We made the decision to transition those business, and focus on driving growth on BN.com and working on growth for Nook as well.”

Argir referred to the “plumbing” of BN.com at least three times in talking about a redesign of the frequently criticized online experience of Barnes and Noble.

And what may be something for a future DBW-opening list of “What has Changed?” points: Argir’s assertion that Barnes & Noble sees nothing to worry about in the advent of Amazon Books brick-and-mortar stores.

“We’re a much different experience” from the Amazon store model, Argir said.

And few who heard this seemed to doubt him.