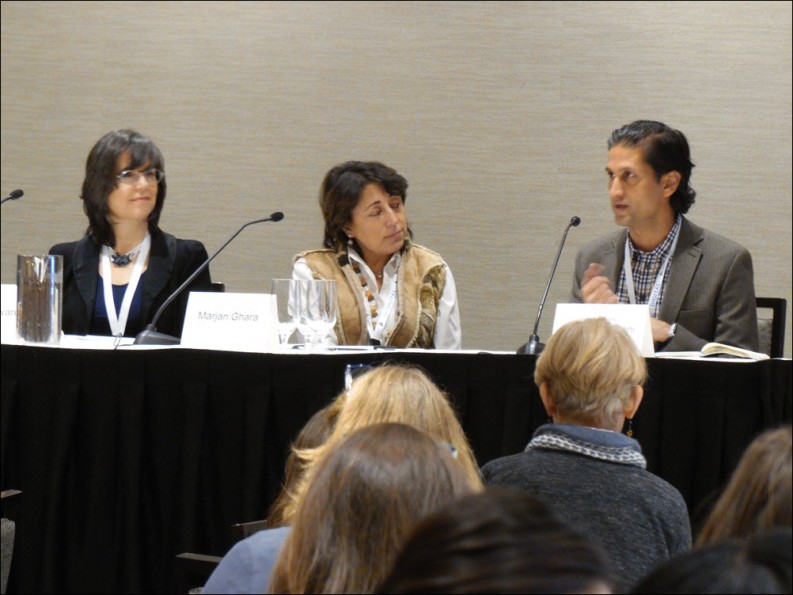 ‘It’s no wonder this has taken us all by surprise’: The younger set’s appreciation for print and more are noted by IPG Fellow Tom Bonnick of Nosy Crow at Digital Book World. From left, Elise Howard, Marjan Ghara, and Ajay Godhwani were on the DBW Launch Kids panel on startups.

In his second of three articles for Publishing Perspectives, Nosy Crow’s Business Development Manager and Commissioning Editor Tom Bonnick—this year’s Independent Publishers Guild (IPG) Fellow to the Digital Book World conference—brings his expertise in children’s publishing to bear on the pre-conference day’s Launch Kids. As he notes one speaker saying, “Marketing today is about humanizing a book in a digital space.” —Porter Anderson

‘Revenue Sources You Didn’t Used to Have’

The opening Launch Kids day of the Digital Book World Conference struck a decidedly optimistic note—unsurprisingly, given that children’s publishing has enjoyed such success over the past couple of years—and DBW Director Mike Shatzkin set the tone for the day in his opening remarks, when he described children’s publishing (I’m paraphrasing here) as a bellwether for the whole industry. The shape of the day’s program neatly reflected the state of the children’s industry today:

The morning’s start-up panel proved an apt reminder of the wide gulf between the traditional publishing and technology industries—perhaps most strikingly in each panelist’s definition of success: while for traditional publishers, this would most likely still be defined with metrics like sales, recognition, and longevity, FarFaria CEO Ajay Godhwani dryly reminded the audience that in Silicon Valley, success means exit, either through acquisition or IPO.

Kristen McLean provided some invaluable insight from Nielsen, reinforcing the positive view of the children’s landscape.

McLean recalled: “When I started in this industry, children’s books were the poor stepchild…that’s not the case any more.”

She described children’s as the growth market going forward—and the area with the most potential for innovation, even in spite of the fact that print remains the dominant format.

A panel of librarians offered some fantastic perspective on current reading behaviors, with a lot of enthusiasm for graphic novels and narrative nonfiction, and a sympathetic understanding of why some kids might read ebooks, which provide cover for kids who are reading below their reading level and are embarrassed by it, the Fifty Shades of Grey effect.

Ashley Anderson Zantop, CJ Kettler, and Susan Katz contributed to a particularly well-informed conversation on the intersection between teaching and technology, situating the current market in a very useful historical context.

As Anderson Zantop noted, for kids in kindergarten today, digital media have always been there. Those children don’t know a world without them.

Anderson Zantop and Kettler provided a useful summary of the commercial and financial challenges inherent in this kind of publishing by anticipating many of the issues that would be raised over the course of the whole conference by introducing the problem of multiple platforms. As Anderson Zantop, noted, “If good content is king, good format is co-king.”

With so much focus on marketing and brands throughout the day, it’s no wonder that some of the most interesting commentary came from the afternoon session “Standing Out in the Stacks: Marketing That Works.”

Scholastic’s Preeti Chhibber astutely noted that the industry has changed because we now expect interaction from readers: marketing today is about humanizing a book in a digital space, and asking readers to interact with you as a publisher.

As mentioned in earlier coverage here at Publishing Perspectives, Dominique Raccah delivered the opening keynote, on the past, present and future of children’s publishing, with all of her characteristic brilliance.

Raccah described the sector as being in the middle of two transformations: a transformation from bricks and mortar to online, and a transformation of format, from print to digital—and expressed a sentiment that would be repeated throughout the day: “The surprise of our transformation is the persistence of physical books.”

The outcome? In the last five years, Sourcebooks’ children’s books sales have increased by over 350 percent, and children’s/YA book sales now make up 34 percent of the company’s revenue, the largest chunk of the business.

It’s not all straightforward, traditional print with Sourcebooks, of course. Some years ago the company asked itself a question: is content-driven personalization possible?

Their answer was Put Me in the Story, which has grown to become the No. 1 personalized books website in the States. Put Me in the Story has changed Sourcebooks’ business in more ways than one: Raccah quoted Shatzkin in saying: “Nothing says transformation more than revenue sources that you didn’t use to have.”

David Kleeman, SVP of Global Trends at Dubit, gave a concise and intelligent overview of the children’s global media landscape, introducing a number of themes that would emerge throughout the day, notably the “content tsunami” in which kids today are immersed.

He also predicted that slowdown in technology change in the next few years, along with the novel idea that “stability encourages innovation”—an idea that I would love to see examined in greater depth.

The final word of the day went to Mike Shatzkin, who defined not only the Launch Kids day, but the entire conference, by affirming that the ”digital” in “DBW” is modifying “world”, not “book.”

This is a conference that’s not just about digital books, but about how our entire industry is interacting with a digital world.