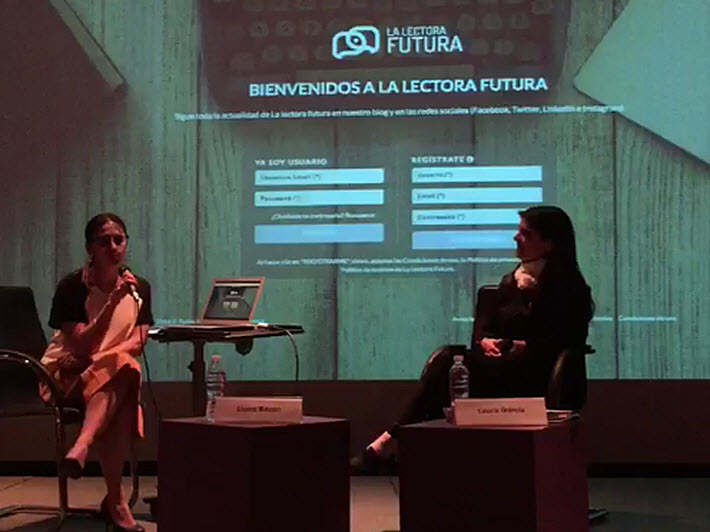 Named as ‘an act of justice’ for the predominance of women among readers, La Lectora Futura is a web-based project designed to bring together fans of literature from Spain, Mexico, Colombia and Argentina. And The Future Reader Wants To Meet You

“Our aim is to be the center of the book world in the Spanish language,” says said Elena Bazán, account manager for the Mexico part of La Lectora Futura, an online book community, on its launch in Mexico City.

Bazán describes the project’s feminine title as “an act of justice.” She cites data that reveals women to be more avid readers of books than men, including a 2015 survey by Mexico’s statistics agency INEGI. One assertion of that survey’s results has it that men prefer reading newspapers over books.

Such gender factors are mirrored in other countries, such as Spain and the United States. Spain’s center for reading promotion (CEPLI), affiliated to the Castilla-La Mancha University, along with the US National Endowment for the Arts (NEA), have found that, on average, women read more books.

According to a 2012 report from the NEA, A Decade of Arts Engagement, 62 percent of readers of literature in the States are women.

“This project,” Bazán said at its opening, “was born out of an affection for books, and the need to bring together readers and all those involved in the book’s chain of production to create a community.”

The project’s site has been created by Spain-based editorial services company Cálamo & Cran.

Users register free of charge and create a profile, entering preferences regarding reading tastes and the type of news feed they wish to receive. The website is divided into sections covering news, events, books and courses.

Running a book search reveals data including publisher, ISBN, a brief synopsis and author biography, and a link to the user’s nearest bookstore, according to the location entered in the profile.

The program’s intent is to offer a comprehensive catalog of books, updated monthly, published in Spain and Mexico. The Argentinian market is to be added in April when the site launches at the Buenos Aires Book Fair.

Colombia is scheduled to be the next country joining the site, completing the quartet of markets that dominate the publishing industry in the Spanish-speaking world.

While users can register and upload information free of charge, the site’s revenue stream will be advertising, with commercial messages appearing as page banners or in custom positioning. Cost will depend on regions targeted and the duration of an ad’s run. Advertising rates do not vary according to location, but can be country or region-specific, ideal for bookstores and book launches, targeting users based on their profile preferences.

“We think it’s a really good business model for booksellers and publishers at all levels,” Bazán tells Publishing Perspectives.

“Banners can target users according to their profiles to ensure that they are not bombarded by information that does not interest them. We want users to have the information that interests them and that is useful to them.”

Such ads will be positioned around the page and not interrupt a user’s reading, she added.

The site also aims to serve the industry by providing a platform to advertise courses, workshops and job vacancies, as well as acting as a network to connect publishers to freelance editors, proofreaders, translators, designers, illustrators and other creative talent within the industry.

The project is supported by a host of Spanish publishing organizations, including the publishing guild (FGEE); the cultural magazine association (ARCE); the authors’ rights center (CEDRO); the union of university publishers (UNE); the Madrid library and book agency; the federation of book distribution associations (FANDE); and the World Writers in Spanish Network (REMES).

And as the site’s book catalog begins to grow, users will add their creative contributions as part of the La Lectora Futura community in discussion and debate, a book-focused social-media platform.

The Buenos Aires Book Fair runs from April 21 to May 9 and feature’s Spain’s Santiago de Compostela as guest city of honor.