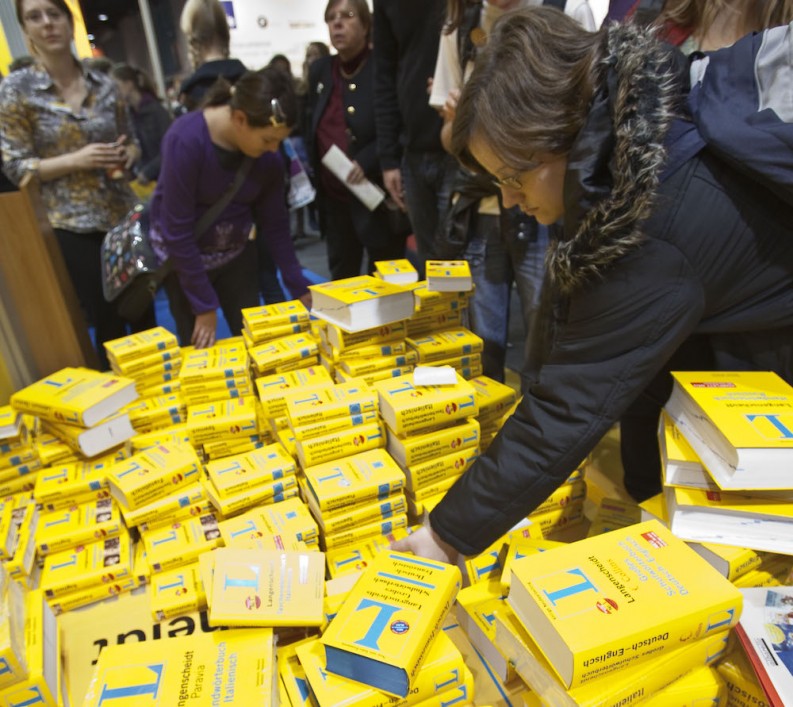 Langenscheidt, publisher of the iconic yellow language dictionaries, is one of several German publishers seeing a sales boost from the rising demand for German language learning materials. Much of this growth is due to the number of refugees who entered Germany in the past year. Langenscheidt is one of several German publishers getting a boost from the rising demand for German language learning materials. Much of this growth is due to the number of refugees who entered Germany in the past year. (Image © Frankfurter Buchmesse/Fernando Baptista)

The educational publishing sector in Germany has seen a tremendous growth within the last year. The demand for learning materials has risen by more than 30 percent, according to a survey of the Verband Bildungsmedien. “German as a foreign language” (GFL) is a particularly strong segment right now, due to the huge number of refugees coming into Germany. The survey, published at last week’s Didacta—the German Book Fair dedicated to educational publishing—showed an estimated turnover of 550 million euros ($600 million) for 2015. According to the survey, more than 8,000 educational titles were published in Germany in 2015. Of those, 1,000 titles focused on language learning for young children.

Publishers like Langenscheidt, an iconic German dictionary publisher, were able to stabilize their sales turnover within the last year, mainly thanks to the GFL segment and dictionaries for refugees.

Ivo Kai Kuhnt, CEO of Langenscheidt, was quoted in the Wirtschaftswoche, saying that sales of the publisher’s Arabic-German dictionary have tripled. GFL titles and dictionaries now make up roughly 10 percent of the Langenscheidt turnover, which the Börsenblatt estimates to be around 50 million euros ($55 million). Other educational publishers are reporting similar scenarios. Pons initially planned a print run of 5,000 copies for its Arabic visual dictionary, but with current sales of 25,000 copies, the publisher has been constantly adding more print runs.

It’s fair to say that publishing houses with a focus on education and learning materials are profiting from the high numbers of refugees who have entered Germany in the last year. The focus for 2016 is on developing new products, both print and digital, while at the same time keeping the most sought-after titles in stock and available. Many expect the educational publishing market to continue to grow.

Michaela Hueber, publisher of Hueber, the world market leader for GFL titles, says: “Right now, the focus has now shifted to ‘German as a foreign language’ titles. What used to be a niche is now the center of attention. It’s likely that we’ll see more competition and that new players will emerge who weren’t present in this sector before.”