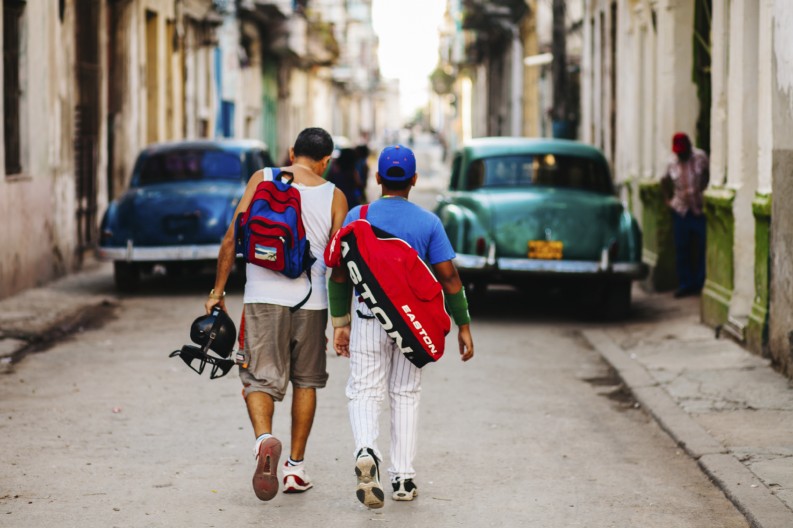 Key players in the American publishing community are unified in their call for a lift of the US embargo of Cuba as it pertains to books. Coker: ‘This Is About the Cuban People’

For an industry that at times seems starkly divided over its digital-era struggles, the book business is coming together with singular speed and pride in its pressure on the White House “to lift the economic embargo against Cuba as it pertains to books and educational materials.” Publishers Weekly has produced the text of the Cuba petition on its cover this week.

“We really want to separate this from politics,” says Smashwords CEO Mark Coker, “and separate it from people’s feelings about the Castro regime. This is about the Cuban people. On a humanitarian level alone, we think immediately lifting the embargo as it pertains to books and educational materials will help the Cuban people.”

Coker is, he says, “the one who conceived of this petition effort.” The idea came to him, he says, while he was participating in the American and international trade delegation last month to the Havana Book Fair.  He has written about the effort on his Smashwords blog site, and tells Publishing Perspectives that “the driving force for this is a small committee of us from Smashwords (myself, Jim Azevedo); Publishers Weekly (Jim Milliot editorial director, Ceven Breyerman EVP/Publisher, and George Slowik, Jr., President); and Combined Book Exhibit (Jon Malinowski and Janet Fritsch who’s president of American Collective Stand, part of Combined Book Exhibit).”

As many who were on the mission to Havana in February have reported, the experience was profoundly moving, not least for the fact that the Cuban population is one of the highest literacy levels in the world, some 97 percent according to our own reporting from Marife Boix Garcia and Hannah S. Johnson.

“Massive, massive credit,” Coker says, goes “to Publishers Weekly. In a world where ideas are a dime a dozen and execution is everything, but we couldn’t have have executed without them.”

There are, Coker says, two phases to the effort to make an impact on policy thinking before President Obama’s scheduled trip to Cuba begins on March 21.

First, Coker says, is an industry petition, which was written up by Jeffrey A. Trachtenberg and Felicia Schwartz at the Wall Street Journal: Publishers Petition White House To End Cuban Book Embargo. And—a writer, himself, as well as creator of the Smashwords self-publishing platform—he writes of being especially glad to see the writing community engaged in the formal effort:

When asked for a comment by Rasenberger for Publishing Perspectives, she said? “Access to books and the learning they provide is a fundamental human right. Books should not be held hostage to politics.

“We take issue with restricting access to books by American authors anywhere in the world.”

The second phase is a public petition that Mark Coker has mounted, which is available for registration at WhiteHouse.gov’s petitions site. At this writing, it has 7,626 signatures of a 100,000-name goal by April 8.

Coker speaks of making 60,000 free titles and 350,000 low-cost titles available to Cuban readers as part of his commitment.

“I’m excited about the opportunity for digital in Cuba,” he says. ” If you think about it, print books are expensive to those of us in developed countries.  Imagine how much more expensive and inaccessible print books are to Cubans.  Even after the embargo is lifted and print books become more affordable, they’ll still likely to be viewed as a luxury good. Digital has an important role to play by making books even more affordable and accessible in Cuba.

“And for Cuban writers, access to digital means that every writer in Cuba will have the option to publish and distribute their books via Smashwords to a global market, and this capability is available to them at no cost.  This is why I created Smashwords — to make publishing accessible to every writer.  Cuba is a perfect use case.”

Publishers Weekly (PW) Senior News Editor Calvin Reid made the trip to Cuba in February, and, at Publishing Perspectives’ request, has given us this viewpoint on the embargo petition effort: “The sight of tens of thousands of Cubans streaming into the site of the Havana Book Fair each day should be enough to make you want to sign the petition calling for the lifting of the trade embargo with Cuba on books. Over the course of 8 days I had to pleasure of accompanying PW publisher Cevin Breyerman and Combined Book Exhibit president Jon Malinowski to Cuba, along with a contingent of 40 American publishers that exhibited at the Fair, the first official American group presence in the history of the fair.

“PW participated in panels on-site at the San Carlos de la Cabana, a 17th-century fortress, now museum, where the fair is held, and organized a series of professional panels in American publishing off-site. PW also initiated an agreement, a memorandum of understanding, with the Cuban Book Institute, to continue to work to normalize relations between the Cuban and American book publishing fields.

“Despite the efforts by President Obama to open relations between to the two countries, many hurdles to normalized relations continue to exist. First, of course, is the overall trade embargo which prevents business transactions with Cuban authors—the reason why PW and others organized the petition. But Cuba remains a poor island and books are generally priced at less than a dollar. American publishers will need to adjust their business models. Its also clear from the enthusiastic responses of publishers in our Cuba group, that American publishers are ready and excited to take on this challenge and work towards getting books of all kinds to the Cuban people. It’s time to lift the trade embargo against Cuba.”

Friedman: ‘Extremely Disturbed by the Scarcity of Books’

Open Road Integrated Media Co-Founder and CFO Jane Friedman is one of the initial signers of the industry petition and at our request gives us this thought about her feelings on the effort to lift the embargo: “When I visited Cuba about a decade ago, I was extremely disturbed by the scarcity of books, including in the libraries I visited.

“And yet the populace rates high in literacy. What a great boon for the economy and for the quality of life if books become readily available.

“I truly hope this will happen soon, and my colleagues at Open Road and I will do everything we can to make it so.”

Raccah: ‘I Was Incredibly Touched by Cuba’

Dominique Raccah, Publisher and CEO of Sourcebooks, was part of the mission to the Havana Book Fair last month, and tells Publishing Perspectives: “I was incredibly touched by Cuba and the Cuban publishing leaders. You could sense how important this meeting was to them in so many ways.

“Guerra, the head of the Book Institute of Cuba said to us ‘I know you will take this work seriously. And I can promise you that we will also be serious about it.’

“We, all of us in the book ecosystem, care deeply about books in part because of the way that books can change hearts and minds.

“What I saw in Cuba was a highly literate people ready to have a deep conversation with which I thought we should engage.

“In fact, during the conference, one of their leaders said to us that one of their goals was to ‘hold a dialogue with the world on the basis of new realities.’

“Like many others in our group, I left inspired.”