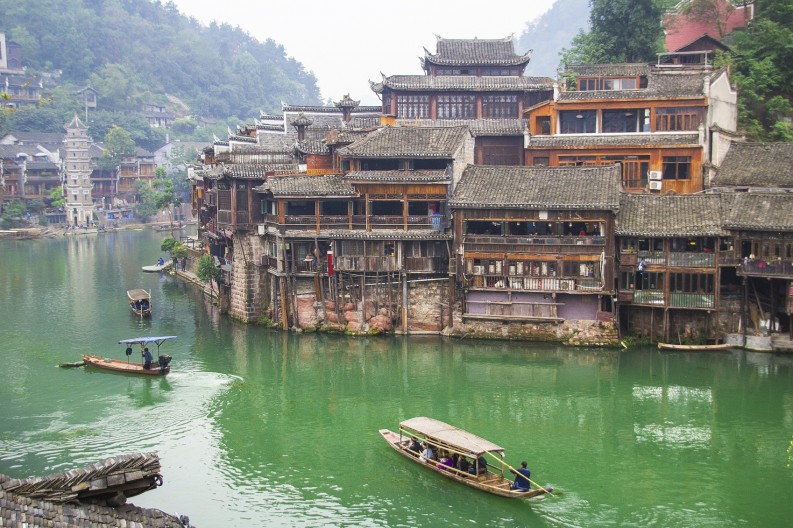 There is, observers say, ‘a group of readers, albeit growing slowly, who are fans of Chinese literature and see it as a way to learn more about China.’ ‘Writers With a Distinctive Voice’

Writing at ShanghaiDaily.com, Yao Minji looks at the problem of why, in the terminology of the article’s headline, Chinese literature “gets the cold shoulder abroad.” While the sci-fi novel The Three-Body-Problem by Cixin Liu has sold more than 110,000 copies in English translation since it came out in November 2014, it represents, writes Yao Minji, a rare success “in a global market where Chinese authors are unknown, and even in cases where their books are translated, readership interest is wan.”

The Shanghai Daily article cites these statistics, but without attribution to their source: Only 8 percent of the 1.6 million titles sold in China last year were fiction, and while options on copyrights to more than 10,000 titles were sold outside of China, very few will actually reach store shelves.

Karin Betz, who has been translating Chinese literature into German since 2008, is interviewed for the article, and says, “What the publishers are looking for here, is a Chinese Murakami Haruki.”

And while many novels set in China have been popular on the international market, starting with books by Pearl Buck and contemporary authors such as Amy Tan and James Clavell, the article asserts, even novels by established Chinese authors such as Mo Yan have had a hard time attracting Western readers.

“Mo Yan was a major gateway author into Chinese literature, but I’m not sure the Nobel Prize had that much of an influence on the general reader,” says Dave Haysom, joint managing editor of Pathlight, an English magazine of Chinese novels, short stories, poetry and essays.

In recent years, Chinese publishers and copyright companies have been making the effort to reach the global market. Last year, China sent a 500 strong delegation of publishing professional to BookExpo America (BEA), with similar attempts made at both the London and Frankfurt book fairs. It was during the BEA tour, as a matter of fact, that Chinese author Feng Tang was introduced to many in the Western publishing field, with the release of Michelle Deeter’s translation of Beijing, Beijing for AmazonCrossing. And in an interview with Thought Catalog, Feng talked about how the kind of celebrity success he has had in China can be a mystery at times, even to him:

“In reputation, I passed through the breaking point three years ago,” Feng said. “And…I don’t know why I sell. When I first published Everything Grows and had my first book-signing session, only four people showed up. Two weeks ago when I did a book signing in China, 2,000 people showed up. They tell me even pop stars don’t always have that scale of event.”

“Unfortunately, I don’t see much change,” says Betz in the piece. “Even Mo Yan is not selling so well in Germany. At least some people know his name now, but that didn’t produce any major rise of interest for Chinese literature. Still, there is a group of readers, albeit growing slowly, who are fans of Chinese literature and see it as a way to learn more about China.” Betz says part of the challenge has to do with the fact that “Chinese novels tend to be long” and aren’t seen as very “modern” to Western readers. She says she hasn’t seen a Chinese novel come in under 400 pages in German translation.

“Chinese literature always has that immense use of proverbs, old-fashioned jokes, and names of historical figures that are unfamiliar to Western readers,” she’s quoted as saying.

And of course, she adds, German publishers usually can’t read the books in the original language, making them a bit reluctant to publish translated Chinese books. “They usually risk a German translation only after an English translation already exists and is selling more or less well.

To help things along, the online platform Paper Republic—which brings together translators, editors, publishers, readers, and authors interested in Chinese literature—offers readers free downloads of the digital version of the literary magazine Pathlight.

In comments for the Shanghai Daily story, Dave Haysom — who runs both the magazine and the Web site — speaks at length on the progress that has been made, including this on Western tastes and contemporary trends: “I think there has been something of a backlash against authors of ‘the Great Chinese Novel,’ who are perceived to be striving to copy their American cousins.

“Generally, I think readers are interested in writers with a distinctive voice [and] who are pursuing their own interests rather than trying too hard to be representatives of the state of Chinese society.

“There is also an increasing number of smaller-scale, independent publishing presses out there, and this is the kind of work that tends to overlap with their literary inclinations. Recent examples of this would include

“Well-written historical novels like Little Aunt Crane by Yan Geling — translated by Esther Tyldesley — continue to be popular, but appreciation for other forms of writing is also gradually growing, with nonfiction from writers like Han Han and works from children’s writers such as Cao Wenxuan garnering more attention.”

Here is a list of Chinese novels Paper Republic recommends for translation.