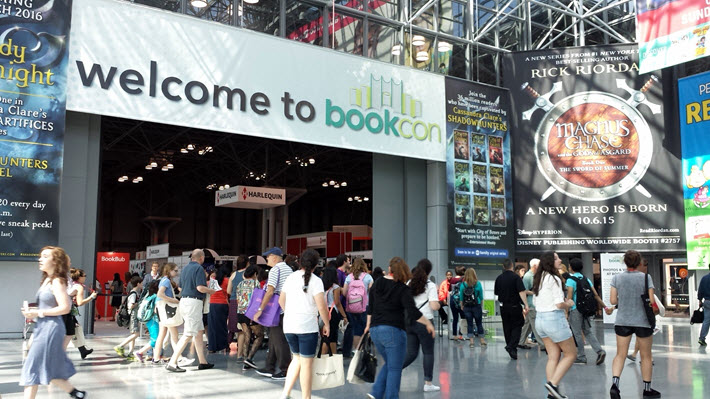 Not only BookExpo America but also its consumer-facing BookCon will be in Chicago in May, trading New York’s Javits Center for the McCormick Place complex. After BookExpo America, the BEA trade show floor is reset for the two-day BookCon. This is the entrance to the con in 2015 at the Javits Center. Image: Porter Anderson

BookCon is the weekend event that has followed BEA for the past two years at the Javits Center in New York with a draw of some 20,000 mostly young-adult fan girls and boys. This year, with BEA moving to Chicago and earlier-than-usual dates (May 11-13), BookCon (like the main show) has the challenge of drawing an audience from new territory.

Led by ReedPOP’s Lance Fensterman, BookCon’s technique is to pack celebrities, merchandise, and fans into the BEA trade show hall after the industry players have had their three days of business. The public buys tickets of $40 at the door, $30 until May 13. (Children 6 to 12 get in for $5.) Highly popular VIP tickets that offer first access and special queues for the show floor and events hall have already sold out. And this week’s biggest name added to the roster is comedian Tig Notaro, who writes, produces and stars in the semi-autobiographical series One Mississippi for Amazon Studios, for which she also appears in a recurring role on the much-awarded series Transparent. In 2015, Notaro’s HBO stand-up special premiered along with Tig, the Netflix Original Documentary about her life.

The connection here is Notaro’s memoir, I’m Just a Person, about her 2012 hospitalization for the colon inflammation Clostridium difficile colitis, known as C.Diff, along with a bilateral breast cancer diagnosis and the loss of her mother. Her stand-up routine opener, “Good evening. Hello. I have cancer. How are you?” became a trademark. Her book is scheduled for a June 12 release from HarperCollins’ Ecco Books.

The success of ReedPOP’s BookCon at BEA prompted Publishers Forum director Rüdiger Wischenbart to program a panel on fandom and the books world, with Fensterman there to describe the concept behind the event which — in contrast to the industry days of the trade show — always rings with screaming audiences and boisterous stars. If anything, the juxtaposition of BEA and BookCon is symbolic of the order and tradition of the business and the contemporary cacophony of popular culture. Coverage of Wischenbart’s Berlin panel on fandom is here and here. (Publishers Forum this year is on April 28 and 29 in Berlin.)

ReedPOP is a division of Reed Exhibitions, which produces both the London Book Fair (April 12-14) and BookExpo America.

In its news release on the coming Notaro appearance, BookCon describes ReedPOP as “a boutique group within Reed Exhibitions exclusively devoted to organizing events, launching and acquiring new shows, and partnering with premium brands in the pop culture world. ReedPOP is dedicated to celebrations of popular culture throughout the globe that transcend ordinary events by providing unique access and dynamic personal experiences.”

And while publishing industry players understand BEA marketing to be built around frequent email blasts, the BookCon context lies in a nearby but different dimension. Want to see? Here’s BookCon’s 2016 “sizzle” video, something not yet attempted, to our knowledge, for, say, the International Rights Center at BEA. Enjoy.