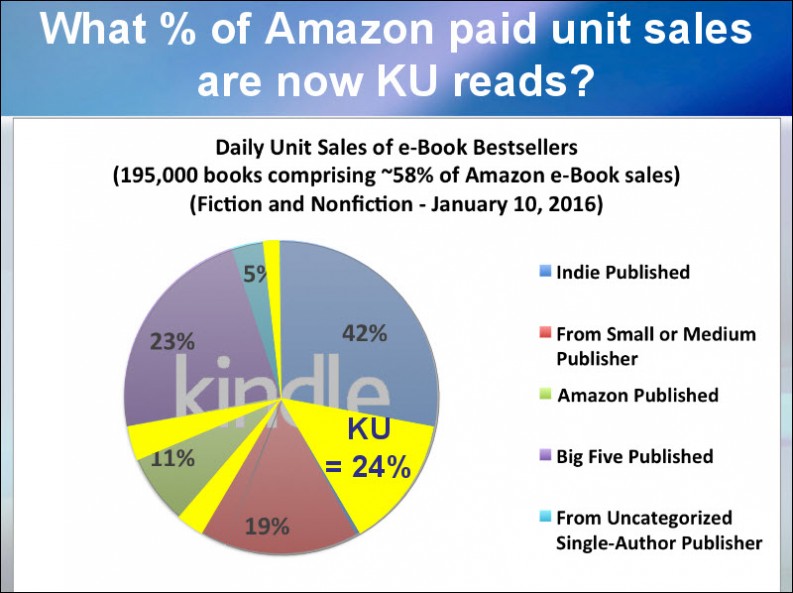 Digital Book World 2016 may have transformed an industry standoff into a cooperative exploration, an unusually deft bit of conference programming. ‘Trying To Solve the [Same] Problem the Big Five Is’

Author Earnings was born amid controversy and rancor around a Digital Book World event two years ago. The 2014 conference had worked with its sister FW Media vertical Writer’s Digest to update a survey of authors that the author Hugh Howey and a host of independent writers said was incorrectly depicting self-publishing as a financially lesser alternative. Howey’s answer was to create a new effort to gauge ebook sales that aren’t counted by typical industry statistical programs. And his partner in AuthorEarnings.com was and is an unnamed writer and technologist nicknamed “Data Guy.” Data Guy made his first appearance Wednesday (March 9) in a 35-minute morning keynote presentation at DBW 2016, and he followed it during the afternoon with a question and answer session with Publishers Marketplace’s/Publishers Lunch’s Michael Cader.

So the key tech player in an effort spurred as a DBW protest has given the DBW assembly a look at how an annual publishing conference can go beyond arraying a series of good presentations on where things stand.

There’s nothing wrong with the state-of-the-situation kind of show. But in the closing minutes of #DBW16 at the Midtown Hilton in New York City, we saw a rarer thing occur: we saw potential cooperative movement, a path identified, something that looks like a possible way forward, and thanks to what began with sharp, heated disagreement. This could be a good moment not only in industry analysis but also in smart conference staging. None has the thing needed most: the ebook sales data known only to the largest online retailers. Cader opened his comments with five of the loudly asserted “news” items that we hear chanted as fact on all sides, based on agenda-driven misinterpretations and inevitably incomplete information.

Print Is Back! is one of Cader’s “breaking news” headlines. Ebooks Are Dead! is another.

Once he’d handed off to Data Guy, the keynote was primarily an explication of the Author Earnings methodology from a man who, it turns out, has his background in data analysis in the video-games industry. “DG [Data Guy] showed how his analysis of Kindle store data can point to ideas across the publishing chain.

“‘There is an opportunity to give debut authors a different price point,’ DG said, pointing to the heavy concentration of sales around ebooks from debut authors priced between $2 and $5.99 versus the very small amount of sales garnered by traditional publishers bringing debuts out priced between $11.99 and $14.99.

“‘They can graduate to higher price point, the same way that mass market paperback titles graduate from trade paperback and on to hardcover. Every debut author is an investment for a publisher and they have time to develop in the market and create a good return. The risk is to become too dependent on movie tie-ins, big-money indie author acquisitions, and other acquisition-driven strategies.'”

‘Quite a Likable Chap’

The potential progress that may eventually set off this iteration of Digital Book World from others was evident later Wednesday, in the last hour of the conference’s breakout sessions. Someone in the audience for the Data Guy Q&A asked if Cader might be able to merge “his” data with that of Data Guy.

Cader, making it clear that the trinity of trade-industry protocols is not his but simply the material with which we’ve had to work until now, showed a lot of interest in the idea— if not of “merging,” exactly, in some way exploring what one approach to quantifying the industry has to offer the other. Data Guy was immediately game, even soliciting data from industry players who’d like to share it. The idea of some form of “triangulation” that might take into account the traditional gauges’ interpretations and factor in the Author Earnings perspective could be a big help in a trying to understand an industry that The Bookseller Editor Philip Jones has said we study only “by candlelight” because we simply can’t get the stats we need from Amazon and other major online retailers on ebook sales.

Until now, Author Earnings’ protocol of harvesting bestselling ebook sales data from Amazon.com and creating a rank-t0-sales comparative curve to interpret that data has reflected its original agenda of demonstrating self-publishing as a potentially viable financial approach to a writing career.

But on Wednesday, with Data Guy’s first public appearance at DBW, this changed. For the first time, Author Earnings spoke directly to the industry. And rather than spinning a web of upbeat numbers on self-publishing’s performance on the Big Platform in Seattle, Data Guy used his time in the mainstage keynote sessions to suggest that his analysis can bring new insights to an industry sorely in need of them — and in a cooperative context: what was agreeably missing was the hostility that many Author Earnings supporters have brought to the discussion.

“At the organization level in particular, knowing more about the missing data gaps will allow for better questions to be asked about competitive market analysis, dynamic pricing, identifying takeover targets, real-time sales projections, and more.” We didn’t know who Data Guy was going in. And we weren’t told during DBW.

While we saw the guy — he’s witty, engaging. “quite a likeable chap,” as agent Laurie McLean referred to him — his actual name was not revealed. We called him DG. He told us at the press table that he is the author of two books. Both self-published. He mentioned that he finds publishing people nicer than video-game people. And that’s it.

But meeting him was helpful. Even learning this small amount of info was useful because he now is understood to be more Data Guy than Book Guy. Maybe it’s his distance from the center of the indie book crowd that has made him remarkably cordial to media members who emailed him — sometimes with criticism — even as some of his supporters snarled at anyone who dared suggest that Author Earnings may not be holy scripture. It turns out that Cader and Data Guy have been in touch for some time. They had done some ground work in explaining to each other the various analyses of the day’s conversations. A cooperative effort between Mssrs. Cader and Guy can only be a goodly dance of very different approaches, if that’s what comes of what Cader kept rightly pointing out was an awful lot of math at a DBW confab.

In the afternoon session, Data Guy spoke frankly about how Author Earnings is a series now of some 11 or 12 analyses of scraped data, and of how the snapshot approach can, of course, never be as effective as a more consistent, frequent, scanning pattern would be. He also said that in hindsight (and with more royalty-statement sales input from what he described as “dozens” of authors), it’s possible to tell now that the ranking-to-sales curve in the original doing of this data dance was even farther off than the 18 percent he reported in the last quarterly article. Data Guy’s twofold message to DBW stressed that Author Earnings, while not perfect (its creation 0f an Amazon ranking-t0-sales curve may be its most problematic feature for some), the protocol does (a) produce a nearly immediate analysis (standard gauges run three and four months after the fact) and (b) offers the only extensive means we have at this point of surfacing perspective on non-traditional parts of the publishing market.

Granted, a potential liaison between our established stats systems and Data Guy doesn’t take away the misgivings that some have for Author Earnings’ methodology. And skepticism is important when looking at any statistical analysis, traditional or not. How easily everyone falls into the “92 percent of Americans believe…” kind of extrapolations that should be stated along the lines of “92 percent of Americans who were surveyed said they believe…,” and so on.

Haste, hostility, shorthand, and agenda have never helped anyone grappling with the data dearth of the publishing industry today.

But Mike Shatzkin’s theme for Digital Book World this year was transformation. And here was one quiet transformation unfolding during the event, itself. No fireworks went off, the Rockettes never arrived. But seeing something like a rapprochement of this kind — one that might help us all quantify the business a bit better — is most welcome.

Data Guy has made an email address available for industry players who would like to be in touch with him. For industry and publisher-related inquiries, write to: PublisherEarnings@gmail.com (Note that “Publisher Earnings” phrase: a new offering to come?)

As usual, authors can write to Data Guy at AuthorEarnings@gmail.com

You can read our coverage on other aspects of the conference here.