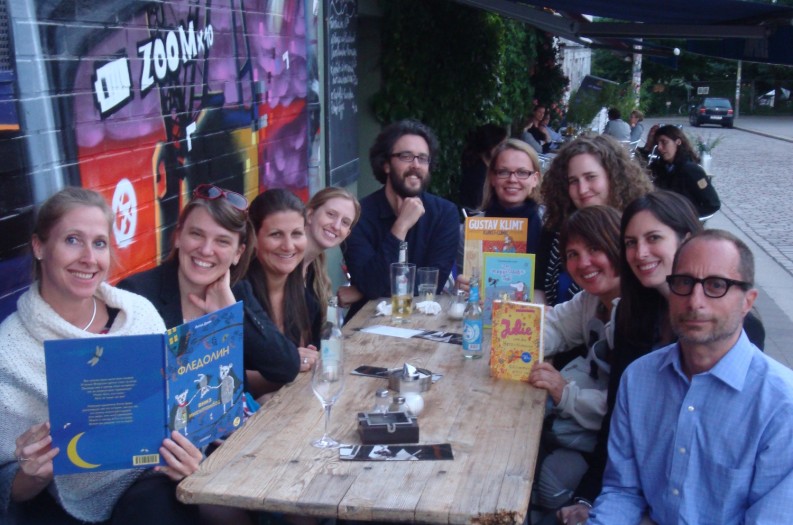 The GBO’s children’s book editor’s trip to Germany this summer is open to editors from the USA, UK, Canada, Australia and New Zealand. The German Book Office New York (GBO) invites you to apply for a six-day Editors’ Trip to Germany, this year focusing exclusively on children’s and YA book publishing. Our trip will start in Hamburg on Sunday evening, June 26th, and will end with a dinner in Frankfurt on Friday, July 1st.

Interested in attending? Fill in the online application form before April 11, 2016.

Thanks to the support of the Frankfurt Book Fair and the Foreign Office Berlin, all expenses directly related to this trip are covered, including economy airfare, hotels, breakfast, group lunches and dinners, as well as transportation within Germany.

Trip participants will have the opportunity to network with German publishing professionals and discuss trends in Germany’s YA and children’s books publishing market. Over the course of the trip, we’ll visit German publishing houses such as Oetinger, Carlsen, Loewe, Arena and S. Fischer. We’ll also host a speed-dating event with German rights directors, visit a German bookstore, and more. You will be able to talk to editors, publishers and rights directors about the German children’s book scene and learn more about current trends, illustrators, and specific titles.

The GBO will choose the participants from the pool of applications following the application deadline on April 11, 2016. The German Book Office New York organizes annual editor’s trips to Germany, each year with a different focus. Children’s books were the focus in 2012 and 2013. Last year, the trip’s theme was nonfiction and philosophy.

The following are are reactions and feedback from previous children’s book trip participants:

Sheila Barry, Roundwood Books:
“I can’t say enough good things about the trip. It was wonderful to meet North American colleagues, we had many thoughtful conversations both as a group and with the German publishers, editors and rights people we met. But the most worthwhile aspect of the trip was the chance to meet such a range of German children’s book publishers and to hear them present their lists. I requested many titles which I am now working my way through, and I’m optimistic that the connections I made in Germany will be sustained and strengthened over the next couple of years … I’m deeply appreciative of having had the chance to go.”

Stacey Barney, Senior Editor, Penguin/Putnam Books for Young Readers:
“It was so nice to discuss the challenges and victories of my job with colleagues. Each person I met was smart, insightful, passionate and generous with what they knew.”

Ben Rosenthal, Senior Editor, Katherine Tegen Books (then at Scarlet Voyage):
“Meeting with the different German publishers, editors, etc., provided tremendous insight into the German book market. However, I found our most interesting and enlightening discussions occurred when we compared our markets, explored ways we could work better together (or why we don’t), and the rapidly-changing industry as a whole.”

David Gale, Vice President & Editorial Director, Simon & Schuster Books for Young Readers:
“For me, the most satisfying aspect of the trip was the fact that we got to discuss German and US publishing with such a large variety of people in many facets of the German book world. I had expected that this trip would just be German publishers pitching books to us, but this trip was so much more valuable than that in that everywhere we went there was a real dialogue among the participants that will benefit the Germans and the Americans equally.”

Julie Matysik, Editorial Director, Children’s and Education, Skyhorse Publishing:
“The German publishers we met were so dedicated to their lists and you could feel the passion they had in talking about particular authors and projects and that’s something that I believe every acquiring editor needs to have.”