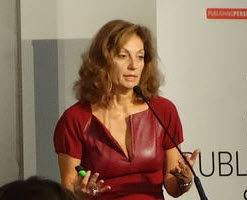 “Absolutely vital to stick to a digital agenda” A voice of reason amid recent “print resurgence” hosannas, HarperCollins’ Chief Digital Officer and Vice President of International, Chantal Restivo-Alessi gave the keynote address at the Future! Publish conference event, which was staged in Berlin on January 28 and 29. Focusing on “mindflow,” workflow and networking, the program was produced by a partnership including the German Booksellers and Publishers Association, Frankfurt Book Fair, Forum Zukunft, and MBV.

Our friends at Buchreport have produced very useful Q&A for Buchreport’s Pubiz with Restivo-Alessi based on themes from her keynote address, and we’re glad to have Michael Lemster’s conversation with her.

During her keynote, Restivo-Alessi told her audience that the recent slowdown of growth in the ebook market is a normal, transitional phenomenon, and that backlist stands to benefit particularly well from digital channels of distribution—certainly something that Jane Friedman’s Open Road Media is proving as it expands into powerfully presented verticals across its more-than 10,000 backlist titles.

As many of the best digital directors in our largest houses might tell you, one of their jobs becomes evangelizing for the importance of digital as a pervasive dynamic, touching, as Restivo-Alessi said in Berlin, all areas of publishing, with international markets a natural for coordinated content marketing.

I encourage you to read Lemster’s interview with Restivo-Alessi, and I’ll just touch on a few highlights here.

Asked what the place of print might be in an (eventually) advanced digitized world, Restivo-Alessi points out that the real question is serving the content, its creators and its consumers with the correct formats:

“We believe, and have seen in numerous studies to date including those about younger consumers, that the printed book will retain a very prominent role in the way consumers experience long form story telling. The positive message is that consumers still appreciate the print book for many of its tactile qualities as well as for the ability the book gives people to show their knowledge and taste.

“We are already in a fully digitized world and consumers continue to engage with long form story telling in all its formats. So our job will continue to be focused around helping the authors of those great stories to achieve the broadest reach and to ensure that their content is properly valued.”

Seen as a strategic move to gain international production and distribution reach, HarperCollins’ 2014 acquisition of Harlequin provided a practical opening for Harper in 18 nations and 17 language-defined markets. In her interview, Restivo-Alessi discusses an intriguing concept for global expansion, trial-by-error based on the Harlequin’s buy’s scale. Note that the sales of international rights to third parties don’t stop in her vision for this scheme. The new moves “complement our existing activities.”

“In the spirit of servicing our authors, we believe that our global publishing program gives us the opportunity to service the authors who decide to participate in it, in a unique way.

“For example we can decide to have a global publishing date, can leverage global social media in a co-ordinated way, can ensure, should the author want that, that the author and the book brand messages are consistent internationally. The beauty of the program is that we can rely on very experienced local management teams – so we can deliver and execute locally – while offering co-ordination and best practice sharing globally.”

Because the digital dynamic naturally drives toward wider audience (as a wildfire, for example, seeks out greater sources of fuel and oxygen), it’s easy to forget that digital systems also can pinpoint and access smaller, defined targets, its success doesn’t always lie in “going viral.” Restivo-Alessi references an intriguing type of verticalization that might involve recognizing community built around the appeal of one or more authors:

“The reason that building smaller scale communities are still important for us is that having a deep engagement with a very qualified audience allows us to do a better job as publishers. We can gain more insights and we can make sure that we reach more consumers–all in the spirit of servicing not just our big authors but all our authors, some of which can’t afford building out their own digital platforms.” Asked about parallels between publishing and music in the digital dynamic, Restivo-Alessi talks of publishing addressing “some of the digital challenges better than music,” and she gives two examples “that show the trajectory” of publishing “is likely to be different:

“In summary, I believe we should always be aware of what is going on in music, because it was the industry that went through the digital revolution first, while not necessarily assuming that all the trends will apply.”

Again: ‘Is It Still Worthwhile Sticking to the Digital Agenda?’

Many of us have observed the recent months of “print resurgence!” commentary on both sides of the Atlantic with what might be termed cautious skepticism. (On a Monday, you might even hear a few of us mutter about Springtime for Crayola.) But the change in the rate of ebook-sales growth has seized many with an idea that All Digital has been thrown back on its heels. Restivo-Alessi, like many of us, no doubt finds herself issuing “stay the course” advice frequently. She did so again here, and I particularly like her reference to consumers today living in “a hybrid world”:

“As I mentioned in the course of my presentation, consumers live in a hybrid world, so it is absolutely vital to stick to a digital agenda.

“Seeing a slow down in growth is normal in any new product introduction, nothing grows forever, and additionally, at least in the US, we are in year of business model transition. However, it is clear, that from a product stand point, digital is here to stay – and that consumers have adopted this product.

“Additionally, digital does not only mean product. There is still plenty of innovation and improvement that can be achieved thanks to digital across many publishing activities. To conclude, as a company, we never saw digital as an either or – but a complement to print. So this latest trend does not change the attitude we had in our company, where we have aimed to integrate digital in every function.”

As it happens, we have more from HarperCollins today, in a lead story and sidebar on the Avon Romance imprint, a sister to Harlequin. Read about that here and here.