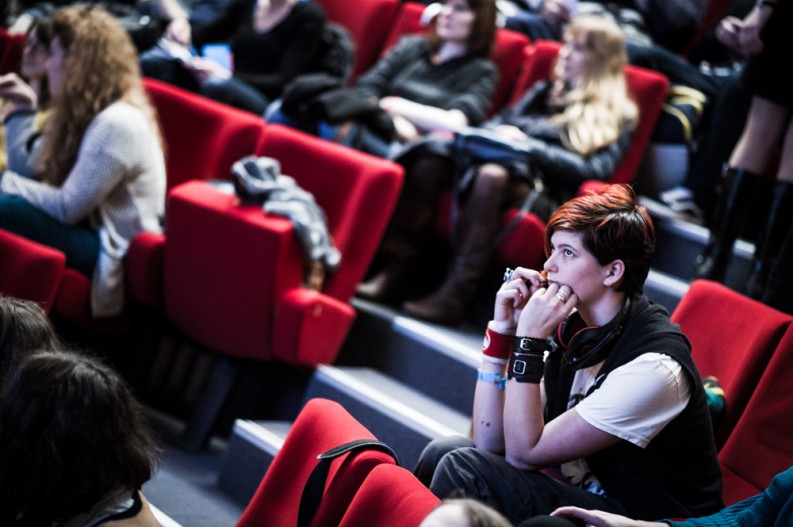 The 43rd Festival International de la Bande Desinée in Angoulême, France—the most important event of its kind in Europe—ended a few days ago on a sour note: during the awards ceremony, the speaker, a literary radio host, took the audience for a ride by announcing false winners before he announced the real ones.

The top prize for a specific book, the Fauve d’Or, eventually went to Richard McGuire’s Here, described as “brilliant and revolutionary” in this informative New York Times piece by Luc Sante.

But the damage had been done. Not only were the publishers and authors of the “false” awards humiliated, but it also was incomprehensible how the master of ceremonies might have thought his heavy-handed stunt would be amusing.

The festival had opened on a similarly disagreeable tone, riding on the wave of clumsy comments made by its director, Franck Bondoux, after the organizers were accused of sexism when the list of 30 prize nominees included no women.

It was fitting, then, that Calvin Reid, Publishers Weekly’s senior news editor and co-editor of PW Comics World, organized a roundtable discussion in Angoulême on the presence of women in the comics world.

You can see Reid’s write-up from the festival on a separate controversy around the Grand Prix d’Angoulême. In that article, Reid points up the importance of the event, making these difficulties all the more regrettable. He writes, “Unlike American comics conventions, Angoulême is a monument to book publishing. There are no blockbuster movies, video games, or transmedia projects on display, and virtually no American-style periodical comics. It’s all books at Angoulême—hardcovers and trade paperbacks—from more than 300 publishers.

What’s more, Reid continues, “Angoulême is also a major rights market for graphic novels. About 60 publishers (including a handful of American ones) registered with the show’s licensing and rights market.”

Reid’s Panel on Women in the Comics World The two women on the panel at the well-attended talk were the Irish illustrator and animator Cliodhna Lyons, and the Australian cartoonist and director of an indie comics festival in Melbourne, Sarah Howell.

Reid—who said he was seeing “an incredible renaissance in women creators” and a rise of diversity across the board—asked Lyons and Howell to talk about how the industry is making room for women.

Howell said that in general, sexism is not “overt, but accidental.” Women artists in public situations are always assumed to be the companions of a male artist. Women are not as good at self-promotion and often don’t attend social events that are for the most part male-dominated, she said. To counter this, Howell decided to organize a monthly event in Melbourne, the Ladies’ Drawing Auxiliary, at which women cartoon artists give talks about their work.

Lyons agreed with Howell and said, “You are always doomed to be the girlfriend rather than the creator. When there are married artist couples, people always talk to the men first.” Lyons said the comics scene in the UK is very interesting, and “Eight years ahead of Ireland… Small British publishers are putting out amazing comics with a real identity and the authors are about half-men and half-women.”

Angus Cargill, who publishes graphic novels at Faber & Faber, said that diversity is always a question in the UK but not particularly gender diversity. He feels, however, that in London, gender diversity has improved tremendously, and cited women as the authors of some of the most notable recent graphic novels, including Emily Carroll, Evie Wild, and Isabel Greenberg. Web comics, added Cargill, have been helpful for women building their platform.

That said, the Internet can be a toxic place, said panelists, who offered examples of online abuse toward women comics artists as well as toward female fans. Some of this abuse has been personal in nature, referencing physical attributes: men are criticized for what they do, whereas women are derided for simply being women.

“You are always doomed to be the girlfriend rather than the creator. When there are married artist couples, people always talk to the men first.”Cliodhna Lyons

Reid, who records a regular comics podcast with two female reviewers—here is one titled Angoulême’s ‘Zero-Femme’ Implosion—said that his colleagues’ online experience “as female fans is sometimes completely appalling.”

On the subject of fans, Reid pointed out that the fan base in the United States is changing, and there is a need within the industry to recognize that women are fans and content has to change.

Looking back in time, Ted Adams, CEO and publisher of IDW, which was responsible for creating a female Transformer, said that gender diversity in the States was a problem because the content was male-dominated. Several editors, including Heidi MacDonald, Karen Berger, and Diana Schutz, were pioneers and began to create content that interested both men and women.

“Throughout the ’80s and ’90s you saw a change with women wanting to enter [the industry] at the creative level,” Adams said. “My mission is hopefully to become gender neutral.” “There’s an urban legend in comics that women draw a certain way and men draw another way.”Lisa Mandel, via Le Monde

Elsewhere at the Festival, a few events took place indicating that the issue of gender diversity was not going away. The collective Female comic book creators against sexism organized a screening of drawings without the names of the artists, inviting the public to guess whether men or women drew them.

While Festival director Bondoux talked about affirmative action in disparaging tones when he was accused of sexism, Johannes Klenell, an editor at the Swedish comics publisher Galago, explained during a roundtable how the establishment of quotas in favor of women helped a new generation of authors including Liv Strömquist, Loka Kanarp, and Sara Granér emerge.

“We are living the golden age of female comics,” said Liv Strömquist, in an interview with the French daily Libération.

French comics author Lisa Mandel said in a video for Le Monde: “There’s an urban legend in comics that women draw a certain way and men draw another way. I think we need to deconstruct this…It’s profoundly unjust, it puts everyone in a particular role that is far from reality and from how each person is inside.”

In closing, the Festival presented a study on comic book and graphic novel authors in France, indicating that the number of female illustrators stands at 27 percent and not at 12 percent, as had been previously stated.