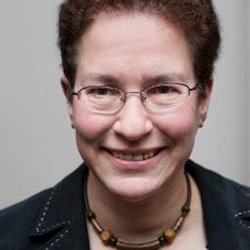 At the opening ceremony for this year’s Festival Neue Literatur held at the Goethe-Institut New York on February 25, German-to-English translator Burton Pike was awarded the 2016 Friedrich Ulfers Prize for his contributions to German literature. Fellow German-to-English translator Shelley Frisch delivered the following laudation, reflecting on Pike as a “generous” colleague and teacher.—Hannah Johnson It is a special honor and privilege for me to deliver this laudation for Burton Pike on the occasion of his being awarded the 2016 Friedrich Ulfers Prize. I’ve known Burton for decades—I can’t even recall how many by this point—and our teaching and translating lives have intersected at myriad junctures.

One instance occurred shortly after I published a translation of a Nietzsche biography with Norton, for which Bob Weil (last year’s recipient of this prize, and a good friend of Burton’s as well) was the editor. Bob asked whether I’d be willing to translate one half of an essay about the writings of Patricia Highsmith; this essay would serve as an afterword to a volume of her short stories, to be called Nothing That Meets the Eye. Intrigued by this unusual assignment, I happily accepted. “My other half” turned out to be none other than Burton Pike, and our translations and names were officially conjoined.

Since that time, our paths have continued to come together in even more ways than one would expect in a field that is not too large in the first place. We serve on the PEN Translation Committee, we have lasting ties to the Übersetzerhaus Looren in Switzerland, and our set of translator friends is well nigh identical.

Allow me a brief detour to illustrate our parallel paths: in 1977 I was offered an assistant professorship in German at Swarthmore College, but turned down the offer to accept a job at a different college. Many years later I learned that this was the very year that young Jonathan Franzen had gone off to college at Swarthmore to study German. How close I had come to being Franzen’s professor! (Of course he did just fine without me…) A dozen years later, I was appointed chair of the German department at Haverford College, Burton Pike’s alma mater. Was this my big chance to mentor a luminary in the field of German Studies? Well, no. Burton Pike had graduated from Haverford decades earlier—indeed, in the very year I was born. Another missed opportunity, alas.

I wish I’d had the chance to be a student of Burton’s. Over his long and successful teaching career—at the University of Hamburg, Cornell, Yale, Queens College, Hunter College, and the CUNY Graduate Center—he has inspired countless students of literature and set their career directions. In 2012, Burton’s former graduate student Genese Grill published a book called The World of Metaphor in Robert Musil’s The Man Without Qualities. Here is her moving tribute to her mentor in that book: “Not only did Burton Pike teach me about Robert Musil, but he also labored to teach me how to read, think, and write clearly and honestly, and to believe in the possibility of language to express complexities and contradictions without collapsing into chaos. … It is thus no exaggeration to say that I could not have written this book without him.”

Many of Burton Pike’s students would echo these sentiments. It is therefore all the more fortunate that since his retirement from the university, Burton has barely let up in his dedication to teaching. He now leads adult reading groups at the Center for Fiction here in New York to discuss the works of Virginia Woolf, Faulkner, Howells, Rilke, Mann, Musil, Balzac, and Proust, and he is conducting a similar group for alumni of Haverford College.

Burton’s stellar accomplishments in translation include new renderings of Goethe’s Sorrows of Young Werther, Rilke’s Notebooks of Malte Laurids Brigge, and Gerhard Meier’s Isle of the Dead. His awards for his translations are too numerous to list here. His co-translation (with Sophie Wilkins) of Musil’s Man Without Qualities, however, is indisputably his mammoth achievement, in both length and scope. Burton Pike’s dedication to the works of Musil extends back to the 1950s, when he wrote his dissertation on this author at Harvard. He quips about his graduate school success, with classic understatement, “As none of my professors had ever heard of [Musil], I sailed through the process and the final examination!” While Burton has remained remarkably humble about his accomplishments, his readers are eager to sing his praises. Noreen Tomassi, who is in the audience tonight, has written of Burton’s co-translation of The Man Without Qualities that it “stands alongside Grossman’s Don Quixote as one of the great works of translation of the last 30 years.”

Burton’s own statement of his aim as the translator of this work was “to have the writing startle the reader in English in the same way it startles a reader in German.” Elsewhere he has emphasized the importance of resisting the urge to smooth out texts when the originals are “radically experimental,” as in the case of Malte Laurids Brigge. That text, in Burton’s translation, opens with these words, “So, this is where people come in order to live, I would have rather thought: to die. I have seen: hospitals. I saw a man who tottered and collapsed. People gathered around him, that spared me the rest. I saw a pregnant woman. She was pushing herself with difficulty along a high, warm wall, which she sometimes reached out to touch as if to convince herself that it was still there. Yes, it was still there.” This translation attests to Burton’s success in capturing a prose that he has described as “arresting, haunting, and beautiful.”

I would like to close these remarks, as I opened them, on a personal note. When I first joined the community of translators after many years of university teaching, I was struck by how closely knit this community was, and still is. We cheer on one another’s achievements and stand together. Even within this community, Burton’s generosity has forever stood out as exemplary. He is always there to lend an ear, and lend a hand. If you’ll indulge my penchant for alliteration, I’ll sum up the qualities I most admire about Burton in a set of voiceless velar stops: Burton Pike is commendably, quintessentially creative, collegial, caring, compassionate, and kind.