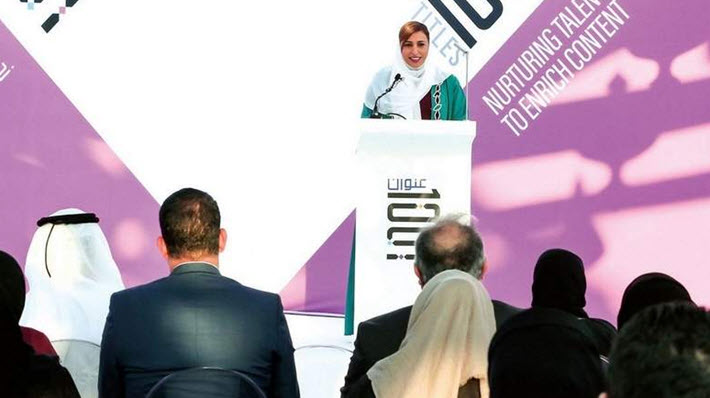 Press image supplied by the event

The Khaleej Times’ Afkar Abdullah reports that Knowledge Without Borders has announced the launch of “1,001 Titles,” a plan to release 1,001 Arabic books over the next two years.

Kalimat Group founding CEO Sheikha Bodour bint Sultan Al Qasimi—director of Knowledge Without Borders, and founding patron of the Emirates Publishers Association (EPA)—spoke at the news conference in Sharjah where the initiative was launched.

Sheikha Bodour will join Nielsen’s Jonathan Stolper at the International Publishers Association’s Congress in London on 10th April in a session titled “Creating the Readers of the Future.” And she’ll talk about her work in children’s publishing and Arabic literature at this year’s Publishers’ Forum Conference (#pf16, 28 to 29 April, Berlin) in conversation with Rüdiger Wischenbart. “This initiative is in line with His Highness Sheikh Dr Sultan bin Muhammad Al Qasimi, Member of the Supreme Council and Ruler of Sharjah’s directions to implement initiatives that ensure our cultural identity will continue to prosper.

“Supporting local authors and publishers means boosting the UAE’s contribution to enriching Arab culture and we hope that these books will touch readers’ hearts and minds and serve as an incentive for young Emiratis to be creative and fulfill their ambitions to become writers.”

Dr. Habib Gholoum Al Attar, Cultural Adviser at the Ministry of Culture and Knowledge Development, is quoted as saying, “It gives me great pleasure to be here in Sharjah—the emirate of goodness, development, brainpower and creativity. I am also pleased to be present here alongside Sheikha Bodour bint Sultan Al Qasimi, one of our creative intellectuals, who undertook to launch cultural initiatives that help promote culture in the emirate of Sharjah.”

As a show of support for the initiative, the Ministry of Culture and Knowledge Development, working with Knowledge without Borders, will exempt authors and publishers from ISBN fees for books that are printed as part of the new program. “It is my pleasure to be with you today to launch this initiative, which will promote culture and reading in line with 2016 being declared the Year of Reading by President His Highness Sheikh Khalifa bin Zayed Al Nahyan.

“The EPA seeks to provide everything needed to ensure the continuity of the local, small and emerging publishing houses and ensure that they can compete amid the many challenges surrounding the publishing sector in the Arab world.”

Rashid Al Kous, the general manger of Knowledge without Borders, went over details of the initiative, saying, “We have launched the official Web site of the initiative—www.1001titles.com—to enable publishing houses to send the content they want to publish. A special committee will select books according to set criteria.

“Those selection criteria include that the content be classic Arabic and in line with Islamic, Arab and Gulf values and traditions, and the priority will be given to Emirati authors.”

Applications will be accepted starting on March 1, and after the content is approved, 1,000 copies of each title will be printed with the cooperation of Abu Dhabi Media United Printing and Publishing Company (UPP). The printed books will be promoted at local, Arab and international book fairs and cultural festivals.