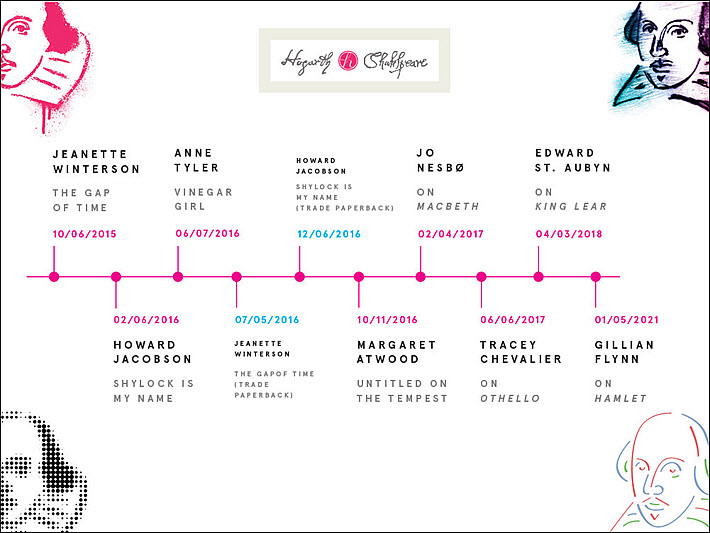 Over hill, over dale,
Thorough bush, thorough brier,
Over park, over pale,
Thorough flood, thorough fire,
I do wander everywhere,
Swifter than the moon’s sphere…
— A Midsummer Night’s Dream

Shakespeare, Shakespeare, everywhere, and it’s only February. And as marketers jockey for position in the 400th year of Shakespeare’s death, the modern-relevance lights burn bright. Of this month’s releases, the key entry is  Man Booker winner Howard Jacobson’s Shylock Is My Name, an interpretation of The Merchant of Venice, from Hogarth. (Hogarth is the partnership launched in 2012 between Chatto & Windus in the UK and Penguin Random House’s Crown in the USA.)

Publication materials quote Jacobson referring to The Merchant of Venice as “the most troubling of Shakespeare’s plays for anyone, but, for an English novelist who happens to be Jewish, also the most challenging.” His treatment of Shakespeare’s themes and characters in the modern worlds of Manchester and football explores contemporary Jewish identity, “offering witty twists,” as Tova Reich writes in The Washington Post, “to a play long experienced by many as a racial tragedy.”

Also of interest, 1616: Shakespeare and Tang Xiangzu’s China is a release coming on the 25th of this month from Bloomsbury Arden Shakespeare, which we might imagine is a busy place this year.

The key interest here is in the fact that Chinese poet Tang Xiansu died in the same year as Shakespeare, 1616. The book’s promotional materials tell us: “Four hundred years on and Shakespeare is now an important meeting place for Anglo-Chinese cultural dialogue in the field of drama studies.

“In June 2014 (the 450th anniversary of Shakespeare’s birth), SOAS, The Shakespeare Birthplace Trust and the National Chung Cheng University of Taiwan gathered 20 scholars together to reflect on the theatrical practice of four hundred years ago and to ask: what does such an exploration mean culturally for us today?

“[This] study offers fresh insights into the respective theatrical worlds of Shakespeare and Tang Xianzu and asks how the brave new theatres of 1616 may have a vital role to play in the intercultural dialogue of our own time.”

That drive to derive meaning—it’s a fascinating element of our absorption with the Shakespeare works, hotly intensified this year. Those of us with a background in acting the shows are probably the only ones who occasionally long for something not re-interpretive, not updated…not “a director with a concept.”

Along those lines, Selling Shakespeare: Biography, Bibliography, and the Book Trade by Adam G. Hooks from Cambridge University Press (releasing on the 29th) looks promising. It’s a study of the poet’s life and career in print—”toward a Shakespearean bio-bibliography”—of “the people who created, bought, and sold books in the early modern period,” says the sales copy.

Also from Bloomsbury’s Arden Shakespeare, this month (the 25th) comes Shakespeare in Our Time: A Shakespeare Association of America Collection of essays on developments in the last 20 years in Shakespeare studies.

Among many more entries, here’s one closer to home for us here at Publishing Perspectives.

In September 2011, Publishing Perspectives launched an online reading group: “The Play’s The Thing” set out to go over all of Shakespeare’s plays, read in chronological order. It was hosted by our contributing editor Dennis Abrams. He has produced a book from that blog.

The Play’s The Thing , from crowdfunding Pentian—illustrated by Pablo Valenzuela—is a two-volume guide aimed at the YA market. It has an overview essay for each play, and emphasizes relevance for a modern young adult reader’s interests.

The book categorizes Shakespeare’s plays not along traditional lines of comedy, history, and tragedy but in terms of themes—family dramas, love stories, black comedies, fairy tales, politics and war. Using modern-day comparisons, the guide’s intent is to provide a contemporary context for younger readers ready to dive into Shakespeare’s work.

Abrams says, “In the 400 years since Shakespeare’s death, his plays have become required reading—dusty classics, really—more than stories a reader seeks out. At the same time, his tales continue to inspire film adaptations directed to young audiences such as 10 Things I Hate About You [1999] and O [2001], and even elaborate interactive theater like Sleep No More. ”

There’s more from Abrams on the book here.

And all is hardly book releases as the anniversary centrifuge speeds up. Froom books to MOOCs, as you can see:

Our Othello online course starts next week! Get your A Level students to check it out here https://t.co/iM1wqOcGvQ pic.twitter.com/sOAOqLNXO6