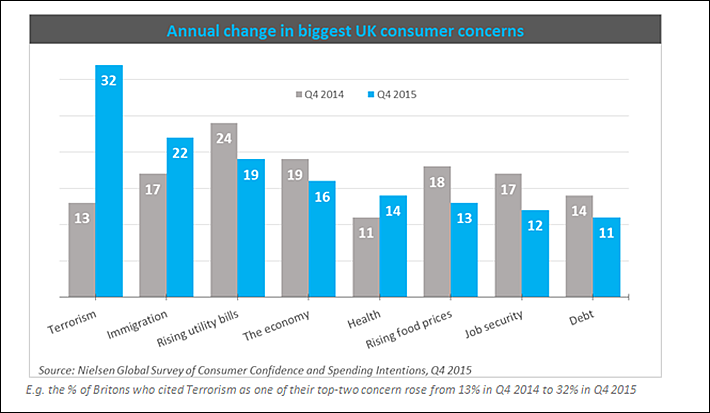 Following on from our conversation with Nielsen’s Andre Breedt in London Book Fair’s Quantum virtual conference, the company has written up some of its Global Consumer Confidence Report material from the end of the year.

In Recessionary Sentiment on the Minds of More Than Half Worldwide, Nielsen sees 55 percent of those surveyed saying that in the fourth quarter of 2015, they believed the were in recession. Recessionary Sentiment Around the World in Q4 2015: Nielsen

“Recessionary sentiment was strongest and above 90 percent in:

“Sentiment was lowest and below 40 percent in:

Ups and Downs in the UK

Steve Smith, Nielsen’s Managing Director for the UK and Ireland has a separate report out with results that show a fall in confidence overall but rising sentiment about spending.

Initially, the report indicates that consumer confidence in the UK has fallen “for the first time since 2013, per Nielsen’s Global Survey of Consumer Confidence and Spending Intentions. Quoting Smith’s commentary: “The UK Consumer Confidence Index dipped two points to 101 in Q4 2015, from 103 in Q3. In contrast, confidence across Europe as a whole increased four points to 81. A score over 100 indicates degrees of optimism, below 100, degrees of pessimism.

“Terrorism and immigration are currently the two biggest concerns among UK consumers. The latest results show terrorism anxiety has hit its highest-ever level, with 32 percent of U.K. consumers citing it as their biggest or second-biggest concern – more than double the level a year earlier (13 percent). Immigration concerns have increased 5 percentage points over the same period to 22 percent.”

At the same time, “the number of UK consumers feeling confident about making purchases,” Smith writes, “has hit 52 percent, rising above the 50-percent mark for the first time” since the survey began asking the question in 2006’s third quarter. Smith goes on:

“For the first time, our study shows the majority of U.K. consumers are now feeling positive about spending.  A succession of favourable factors – such as a glut of retail promotions, falling fuel prices and a supermarket price war – is helping to make our money go further, leaving more to spend on non-essentials such as leisure and entertainment.” Looking Up in The Philippines

In S0utheast Asia, Nielsen sees The Philippines leading the way for the most bullish regional confidence stance. Quoting a breakout report on the region:

Just under three-quarters (74 percent) of Filipino consumers say local job prospects are good/excellent in the next 12 months compared to the global average of 48 percent. Almost eight in 10 (79 percent) perceive their state of personal finances to be in good stead while 46 percent believe it’s a good time to buy things they want and need.

Our report on Wattpad’s singular popularity in The Philippines is here.