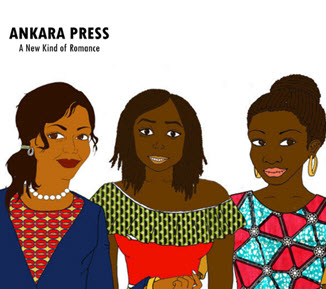 Nigeria’s Abuja-based romance publisher Ankara Press (an imprint of Cassava Republic) has announced the release of its first six titles in print format. The six novels, originally published as ebooks, will be available in Nigeria, priced at Naira 750 (around $3.75) on Valentine’s Day, Sunday. “We have had a fantastic response to the ebooks, but have also had a lot of enquiries from readers asking when we will be publishing the books in hard copy. So we’re really excited to announce that we will be releasing the first six Ankara Press novels in print in Nigeria on Valentine’s Day.

“Ankara Press will also be publishing two new novels in ebook format on 14th February. The Seeing Place by Aziza Eden Walker is the story of an up-and-coming actor who falls for his casting director. Love Next Door is the second novel for Ankara Press by South African writer Amina Thula, whose first book Elevator Kiss has been a big hit with romance readers.”

Launched in December 2014, Ankara Press is dedicated to publishing easy-to-read, purse-sized books with African settings, storylines, and characters. The goal is what the company calls “a new kind of romance,” challenging romance stereotypes and providing an outlet for romantic fiction written by African authors

The reaction to the first titles has been highly positive, as gauged by early press coverage:

“Step aside Mills and Boon. Ankara Press is here! The new and hip romance story imprint that’s had African literary Twitter buzzing for weeks is worth every beam of spotlight it’s enjoying at the moment.” – The Guardian

“It is a pleasure to read books set in cities that you know. You notice landmarks. You find the language, idioms and phrases used familiar. You feel that you know people like the characters. We definitely want to see more African love stories like this.” – This is Africa

As for Ankara’s future plans, Shercliff says, “We are trying hard to keep up with the demand from our readers and hope to publish another four titles in ebook format before the end of 2016. We will also release the first six print titles in the UK and Europe on the first of July.”

More information about all the titles is available at: www.ankarapress.com.