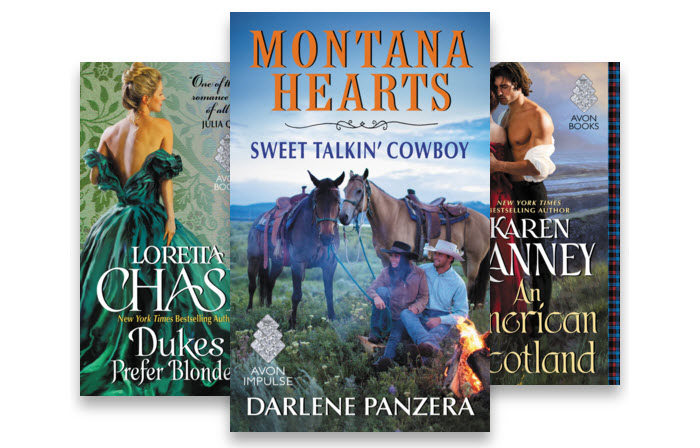 “Happily ever after” has been around as a phrase for a long time, but it’s changed in tone over the years. In 1972, Avon famously published Kathleen Woodiwiss’ trailblazing The Flame and the Flower, considered the first historical book to document physical intimacy between the protagonists.

“Think of where women’s rights were in 1972 to where they are now,” says Vice President and Editorial Director of Avon, Carrie Feron. “There are more opportunities open to women now than there used to be. Historical romances that are published today won’t necessarily seem historically accurate.”

In fact, the once ubiquitous term “bodice ripper” is in deep disfavor among many, for its connotations of violence and non-consensual sex. Beverly Jenkins, a prolific writer whose books range in time periods, but have a heavy focus on 19th-century African-American life, plants her female characters firmly in the trenches of America’s painful history.

“When you read my work,” Jenkins says, “you may see Harriet Tubman or outlaws, you may see Native Americans and a Massacre at Sand Creek. I love romance, but I do it with an eye through my characters. How did they live within the confines of the Jim Crow laws? In spite of trials and tribulations and horror of the redemption period, we still loved. We still founded companies. We took the lemons and made lemonade out of it.”

Avon conducts online read-alongs for their avid consumers. In some ways, the read-along program provides an interesting window into the evolving attitudes of romance readers. Bestselling historical romance novelist Sarah MacLean led a reading of The Flame and the Flower and some women were dismayed by a rape scene.

“The genre is evolving just as women’s role in society evolves,” MacLean says. “The Flame and the Flower begins with the hero raping the heroine, and ends with their happily ever after—something that speaks to the much larger issue of women and sex in the 1970s.

“In these early books,” MacLean says, “lack of consent gave permission to women—heroine and readers alike—to explore their sexuality without shame. Essentially, at a time when good girls weren’t supposed to have sex for pleasure, these scenes gave them permission to be sexual and be ‘good.’

“That’s changing in the world, thankfully, and so we see it changing in romance as well.”

Over time, the book world’s debates have come to include and emphasize issues of women in literature, women missing from the canon, depictions of women’s fantasies. Making money from fantasy is one of the oldest tricks in the book, but that book is changing. “I have always self-identified as a feminist,” says Julia Quinn, a bestselling historical romance novelist. “I have Gloria Steinem on my Christmas list. You have to write characters who can advocate for themselves, but they have to do so within a proper historical framework.”

This isn’t to say that there’s a right or wrong in how to present fantasies in historical romance; indeed, there are different niches in print and online, as in the many subgenres of romance in general. In today’s historical romantic fiction, some women characters may seem to have a more modern sensibility than they did in 1972, but they have to live within the constraints of whichever historical framework has been assigned them.

“The difference between the early heroines and the heroines of today,” says MacLean, is that “they’re still the dominant hero of the play, so to speak. Heroines are the heroes of romance. They’re the adventurers. It’s their story more than that of the heroes.”