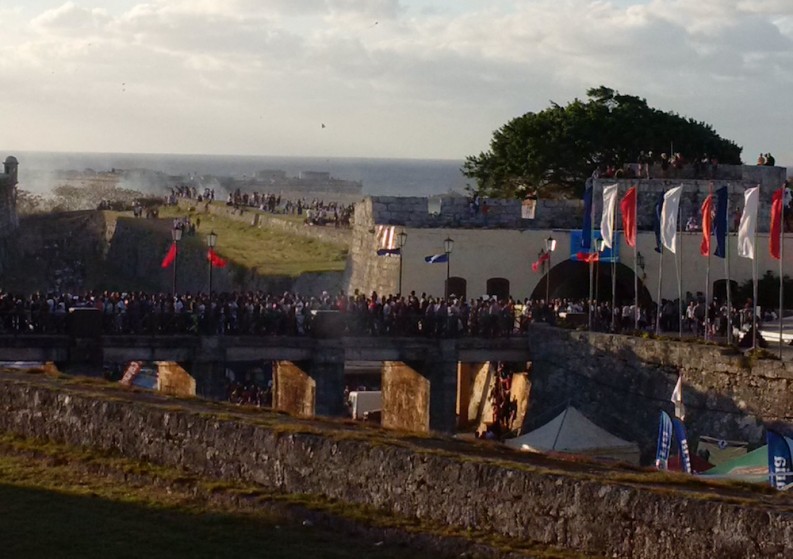 A far cry from the sprawling exhibition halls that many regular book fair visitors know, Cuba’s Havana Book Fair takes place outdoors in the Fortaleza de San Carlos de la Cabaña, an 18th-century fortress that overlooks the Havana harbor. Crowds of Cubans stroll through the avenues between the fortress buildings, and the publishers’ stands are tucked into individual nooks along the walls.

Following the restoration of diplomatic relations between the USA and Cuba in June 2015, this year’s Havana Book Fair (February 11-21) was an opportunity for American publishers and book professionals to get to know the Cuban market. This year, Publishers Weekly (PW) and Combined Book Exhibit (CBE) cooperated to organize the first-ever U.S. Publishing Mission to Cuba. In addition to a collective stand at which 40 publishers exhibited titles, the mission also included a two-day professional seminar that brought together around 80 participants from both Cuba and the United States.

According to the fair organizers, the Havana Book Fair hosted 171 exhibitors this year, of which 101 came from outside Cuba. These international exhibitors include consulates and national libraries from various countries, as well as publishers and national collective stands. The German collective stand, which has been a fixture at the Havana Book Fair since the 1980s, was particularly strong this year with 450 titles on display.

In addition to the seminar organized by PW and CBE, the professional program at the fair focused on the global Spanish-language book business. The Grupo Iberoamericano de Editores held an international meeting with participants from Uruguay, Argentina, Paraguay, Mexico, Brazil and Panama. There was also a two-day program for Cuban booksellers, as well as activities for translators and publishers. ‘So Many Young Enthusiastic People’

Apart from these professional events, the primary business at the fair is selling books to Cuban consumers.

José Borghino, Secretary General of the International Publishers Association, observed, “My impression of the fair is very positive, so many young enthusiastic people with plastic bags full of books.”

Educational material (e.g. encyclopedias, dictionaries, reference and computer books, etc) and children’s books are perennial top-sellers at the Havana Book Fair. Remainders and overstock books shipped in containers from countries including Mexico and Spain also end up on sale at the fair.

“The book market in Cuba is experiencing a development crisis. Processes that worked in the past must now be reconsidered.”Zuleica Romay, President, Instituto Cubano del Libro

All books printed in Cuba are heavily discounted for consumers, according to the Instituto Cubano del Libro, because of subsidies from the Cuban government. A book that would sell for $20 to $25 in other countries costs $2 to $3 dollars in Cuba—sometimes even less.

While the controversial United States’ economic embargo against Cuba remains in place, both countries’ governments are making efforts to forge stronger ties and lay the groundwork for future cooperation.

For American publishers at the Havana Book Fair this year, much of their work was also about forging connections and building a foundation for future business opportunities.

In what almost felt like a publishing gold rush, many professional visitors at the fair this year were closely watching the changes taking place in Cuba and trying to best position themselves for upcoming business prospects.

During the PW/CBE seminar, the Instituto Cubano del Libro presented statistics and information about the Cuban book market. With a population of 11.3 million people, Cuba has 313 bookstores, 300 public libraries, and 10,000 school libraries spread out across 169 cities and towns. There are 170 publishers. On the digital side, Instituto Cubano del Libro claims that 70 percent of Cubans read on digital devices, which is hard to believe, given that there is a shortage of digital devices and very limited Internet access because of factors including the economic embargo and local government restrictions. The IB Times reported last year that “barely 5 percent of Cuba’s 11 million residents are able to get online.”

Dominique Raccah, Publisher and CEO of Sourcebooks, who spoke at the seminar about digital development in the U.S., said, “It was fascinating to hear about digital from the Cubans who have less than 5 percent connectivity. Cubans are a highly literate people (97 percent literacy). It was fascinating to hear their hopes for their country and their vision for the development of digital and print.”

It’s clear that Cuba is beginning to experience a big shift in its market, something likely to continue as the US and Cuba work toward improved economic relations. To that point, Zuleica Romay, President of the Instituto Cubano del Libro, said, “The book market in Cuba is experiencing a development crisis. Processes that worked in the past must now be reconsidered.”

Of course, this means that there will be plenty of opportunities for established publishing companies to offer their expertise and services to Cuba in the future.

During the seminar, Victor Rodriguez Nuñez, a Cuban poet and translator now living in the U.S., expressed hope that the growing American interest in Cuba and its literature is here to stay: “It’s a shame that translations in the US only make up 3 percent of the market. I hope that this [mission] is an authentic gesture and not just a trend, because Cuba is now open to the world.”

Tina Jordan, VP of the American Publishers Association, responded by saying that the 3-percent figure is an inaccurate one, although she acknowledged that there is still no definitive data on the number of translations in the US market.

But given the number of CEOs and publishing executives that made the trip to the Havana Book Fair this year, it seems clear that Americans are interested in doing business in Cuba and are eager for more trade between the two countries.

Raccah, for one, is optimistic about the future: “The trip was both historic and deeply personal. It created opportunities for us in a couple of ways:

First, the conversations were broad-ranging and vigorous. And because [the Cuban] business model is so very different, I found myself rethinking a lot of things that we take for granted.

And secondly, the U.S. contingent was terrific and there will be business that happens for us all I suspect.”