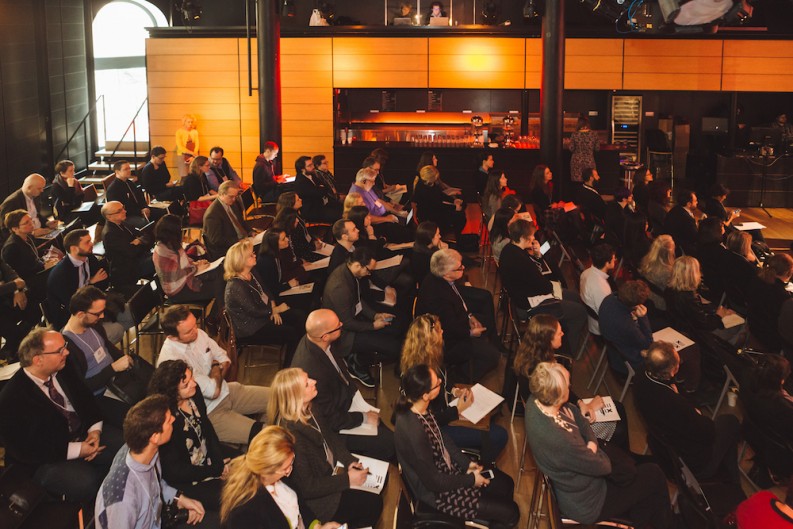 “We want Export Exchange to be a destination event for Canadian publishers who are motivated to take export markets by storm and benefit from global strategic business opportunities,” said François Charette. He’s Executive Director of Livres Canada Books and organizer of the first Export Exchange event in Montreal last week (January 28).

Coming from a smaller book market that’s next to a really big book market (USA), Canadian publishers are looking for and utilizing creative ways to make their authors stand out and to bring Canadian culture to the global stage.

The Export Exchange program invited speakers from various creative industries—including video games, music, and fashion—to speak about their experiences in building global audiences and brands. As Nina McCreath, Manager of International Sales at Robert Rose, said, hearing from people outside the book industry offered some “fresh thinking” about how we can approach our own publishing businesses.

It’s hard not to be jealous of the massive audiences that Aymar Azaizia (Head of Content for the Assassin’s Creed brand at Ubisoft) and Michael Renaud (Vice President at Pitchfork Media) have helped build for their respective brands.

Video game empire Assassin’s Creed has 150 million unique players around the world, and its parent company Ubisoft has sold 3.5 million books based on the universe depicted in the game.

So what’s the secret to building big audiences of loyal fans in the media business?

According to Azaizia, as Ubisoft began looking to expand the Assassin’s Creed brand, one obstacle was Ubisoft itself. It was only when “we stopped thinking of ourselves as video game developers, but instead as entertainment providers” that more possibilities began to emerge, he said via simultaneous translation from French to English.

Assassin’s Creed is video game in which Assassins (the heroes) battle the Knights Templar across time. (If you haven’t played it, give it a try…it’s fun!) Ubisoft works with historians to reconstruct each setting and time period and to tap into the storytelling potential of each unique setting. It’s this historical fiction angle, Azaizia said, that resonates with players around the world. Authors of the graphic novel spin-off series are free to choose their own story lines and historical settings that most capture their imaginations—the latest one is set during the Russian Revolution—rather than following the video game script.

The strategy of focusing on the historical storytelling potential of the brand has paid off, and the series has started to reach fans outside the typical video game player demographic. While the players are primarily males in their early twenties, graphic novel readers are 50-percent female and their average age is 30.

For Renaud and the team at Pitchfork, the strategy is “humans, not clicks.” While it can be easy to see web traffic and sales as numbers instead of people, Renaud told the audience, “we think about the people who are reading [our stories] and what it’s going to mean to them.”

Pitchfork writes for a focused group of music fans who tend to identify themselves by their music taste, said Renaud. They want to be the first to know about new artists and songs, and Pitchfork’s focus on highlighting “emerging sounds, bringing progressive music to the forefront” delivers.

The other crucial component? “Everyone who works at Pitchfork loves music, and that’s the type of audience we have.” Issue 8 of The Pitchfork Review

One interesting development at Pitchfork has been the online magazine’s foray into print. They launched a quarterly magazine, The Pitchfork Review, two years ago, and the eighth issue has just been released.

Why should a successful site launch a print publication? While the website content helped people discover new tracks and get the latest news, the online writing wasn’t focused on old music, nuances, and deep dives, said Renaud. The print magazine has a different editorial focus that complements the daily online stream of content. Right now, they have a print run of 10,000 copies per issue. And because Conde Nast acquired Pitchfork in October 2015, you may see this quarterly magazine expand its distribution in the coming year.

For independent fashion designers and independent publishers alike, getting more retail visibility is a vital component of the business and one that requires some extra creativity. Although the bookselling industry isn’t in total free fall anymore, shelf space isn’t as abundant as it once was.

For Montreal-based fashion designer Mariouche Gagné and her brand Harricana, growing her sales beyond the single retail store in Montreal is crucial to her company’s survival. In fact, she’s done so well that 50 percent of her sales now come from outside Canada.

In college, Gagné won a fashion design competition by cutting up one of her mother’s fur coats and turning it into a new piece. From there, the idea to turn that model into a company was born. Harricana has recycled more than 50,000 fur coats and estimates that it has saved the lives of more than 500,000 animals.

But to communicate this story to potential customers when they’re shopping in a store or browsing online isn’t easy—particularly given the short attention span of shoppers today. So Gagné came up with her “ecoluxe” logo to portray the important part of her story—recycled fur—in a graphic form. Both in a retail setting and online, having a recognizable graphic element to explain the brand could be the difference between selling something or not.

As an example of the kind of retail partnerships that Gagné looks for, local ice cream shop Bilboquet hosted a pop-up store for Harricana winter accessories in November. As cold weather set in, ice cream sales started to drop and fur hat sales start to increase. Together, however, the promotion boosted sales and visibility for both brands.

Her partnerships have also extended to the local publishing community. Montreal publisher Québec Amérique (QA) worked with Gagné to promote its Gaby series of historical fiction novels based on the real life of Quebec’s first fashion designer Gaby Bernier. QA hosted its book launch in the Harricana store, and Gagné participated in media interviews with the author.

As the discussions continued throughout the day, one standout quality of the gathering was the strong sense of community among the Canadian publishers who attended.

“When we gather at meetings such as the Export Exchange or the Translation Fair that followed it, we’re reminded of the breadth and diversity of Canadian publishers, and the collegiality we enjoy within our group,” said Matt Williams, current president of the Association of Canadian Publishers and Vice President, Publishing Operations, at House of Anansi and Groundwood Books.

“That is a real strength of our domestic industry and has stood us, and the authors we publish, in good stead for many years. It’s a pleasure, too, to be able to show this side of our work to others around the world.”