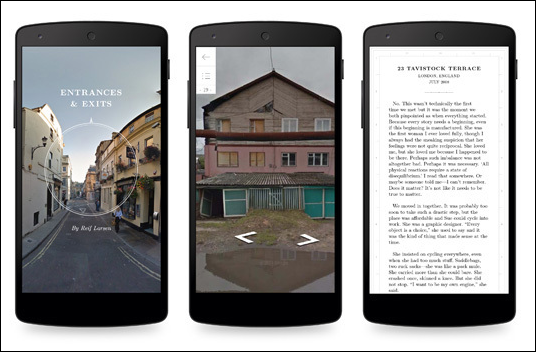 From the branding and identity guidelines for Editions at Play.

At Melville House, Zeljka Marsoveic writes that, “The experimental publisher Visual Editions has teamed up with Google to launch ‘Editions at Play,’ a digital bookstore ‘for books that cannot be printed.’”

As described at The project’s web site:

“The goal of Editions At Play is to allow writers to create books which change dynamically on a reader’s phone or tablet using the Internet, and to engage the next generation of readers on their phones as well as in print. We want to create books that are powered by the magic of the Internet.”

And what, you might ask, are “books that can’t be printed?”

Again, from the Web site: “The printed novel in ‘book’ form has been around for about 400 years.

“eReaders started to appear in the late 1990’s, and in 2016 mobile phones are set to be the most popular way to read ebooks.

The first titles, which have been commissioned specifically for this platform, include a book that utilizes Google Street View, Entrances & Exits by Reif Larson, and a “failed” collaboration between poet Sam Riviere and novelist Joe Dunthorne, The Truth About Cats and Dogs, using material from both writers’ diaries and poems.

Visual Editions’ Anna Gerber is quoted by Katherine Cowdrey at the The Bookseller:

“We think of it as a response to the world of digital books, e-books, enhanced e-books, and online PDFs. Because quite frankly we believe readers deserve more. So why not make digital books that are more bookish. And more delightful. And even magical.”

The books will be sold through Google Play Books, the company’s information says, “to make the transaction simpler for both publishers and readers.” The purchase of a book will provide access to a special mobile Web site—the ‘digital book’—that uses “the dynamic qualities of the Internet to power the reading experience.”

The books are designed to be read on Android and iOS.