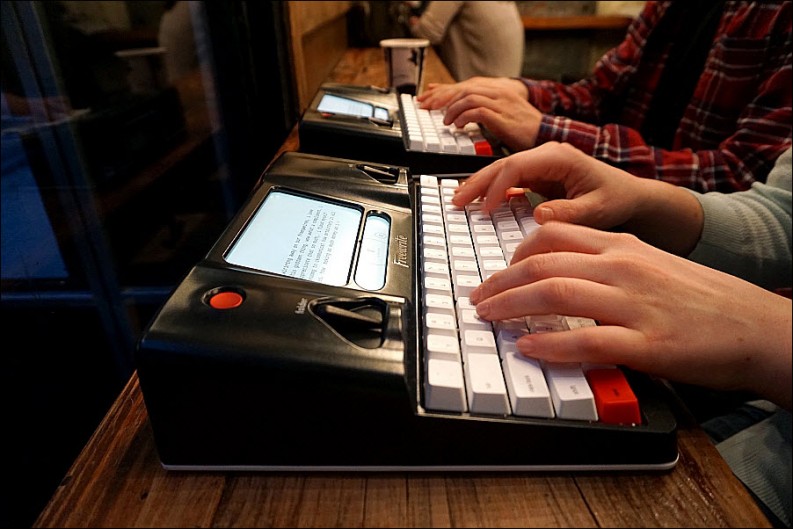 Powered by a $342,000 Kickstarter campaign, a “distraction-free” bit of writing technology debuts today…looking a lot like your father’s typewriter. When we talked to Adam Leeb of New York’s Astrohaus last August, the Freewrite’s site proclaimed that the product was “coming this fall.” It didn’t come in the autumn of course, but it’s making a winter debut. Leeb tells us that it’s launching today (February 23), at last.

And for a product release that has moved farther into the future than anticipated, this sure looks like a device of the past. Still, its makers are calling it “a non-kludgy tool” in presenting it to the market.

In the context of the digital dynamic, the arrival of the Freewrite is an interesting moment. For all the access that much of digital communication provides today, that can be one of the hardest things for creative people to handle. And certainly the same is true for business people, legal workers, educators, anyone who may need to write and prefer to do it without exposing their sensibilities to the online world.

The Freewrite is described by its designers and manufacturers as:

“A single-purpose computer designed specifically for writing composition. It combines a thoughtfully designed interface and the best quality components to provide the 21st-century writer with an environment conducive to productivity. As the first smart typewriter, the Freewrite combines the simplicity of a traditional typewriter with the benefits of modern digital electronics, including seamless syncing to the cloud.”

Call this retro-tech. Or partial tech. In the battle to stay focused—What? Oh, sorry. Got distracted there.—Leeb and his Astrohaus co-founder, software developer Patrick Paul, became aware that their writing friends were (and are) losing their concentration, maybe their minds.

“And it turned out that everybody we talked to had some kind of distraction-free technique,” Leeb says. “Whether they used distraction-free software or disconnected from the Internet [to write] or they wrote on a typewriter or in long-hand. And that was what made us think maybe there was an opportunity here.

“Maybe the writing community would be well-served by a piece of technology that mimics that simple experience that people really love in a typewriter, but with the additional convenience of documents you don’t have to retype and don’t have to worry about losing or getting wet.

“All that stuff that comes with writing on paper or an old device.”

How interested were people in something that might help them write coherently for a few precious moments without distractions?

When Leeb and Paul put what they then called a Hemingwrite into a Kickstarter campaign—in January 2015—they set September 2015 as an estimated delivery target and a goal of $250,000 on the ask.

They got $342,471 in backing from people able to cut through the beeping, blinking, bouncing joys of digital life long enough to place a contribution.

The first 1,000 iterations of the device were scheduled to go to those backers, but in August, when Leeb spoke with us, he was careful in how he characterized any suggestion of when the machine might be shipping.

“The design has been done for months,” he said. “Very intentionally, before we launched the Kickstarter, we made this a design with some flexibility, relatively conventional manufacturing methods…That being said, there have been plenty of places where we could have had issues in the supply chain. Our vendors have really stepped up.”

As a design startup, not a manufacturing company, Leeb said, Astrohaus found itself “focused every day on the supply chain,” he said.

To get a fix on what this means, we asked him about the keyboard. “Right. There’s one company that does the molding for key caps.”

Another company will mark the key caps.

“Then there’s another company that will assemble the key caps onto the keys.

There’s probably four or five companies just on the keyboard.”

“By far the two most expensive components for us,” Leeb says, “are the keyboard and the screen. Only one company in the world really makes this screen, and that’s E-Ink. There’s different cost pressures for them and they have a lock on that product. And on the keyboard side, we’re using a keyboard with a lot of parts.”

The design won a Core77 award, citing it as “a minimalist digital typewriter for distraction free writing. It marries the simplicity of writing on a vintage typewriter or word processor with the conveniences of modern technology. Like a typewriter, the device presents the user with a blank writing canvas where they can only do one thing, write.”

‘The Dream of the Device’

While the pricing on the unit may be daunting to some, “Everybody who types a little on this thing,” Leeb tells us, “says, ‘wow, this keyboard is amazing.'”

Astrohaus says the Freewrite weighs 4 pounds (1.8 kilograms). Its body is aluminum and the handle stows. Batterly (LiPo) life, based on 30 minutes of writing per day with the wi-fi connection off, is said by the company to be four weeks.

Leeb concedes that he’s not a writer—”I don’t even play one on TV”—but Patrick Paul, his Astrohaus partner, has done some journaling, he says, and they’re convinced there’s a ready demand for the Freewrite.

“We want it to be an instruction-manual-free device” as well as distraction-free. “The dream of the device is you don’t have to worry about ‘where are my files?'”

A lot of discussion has gone into how challenged readers may be today in trying to focus on longer-form material. And Leeb is right, the author corps is in continual conversation—distracting, in itself, of course—about the difficulty of staying on-task to do their best work. It should be interesting to see how sales of the Freewrite go as they open today at 1 p.m. Eastern time (1800 GMT).