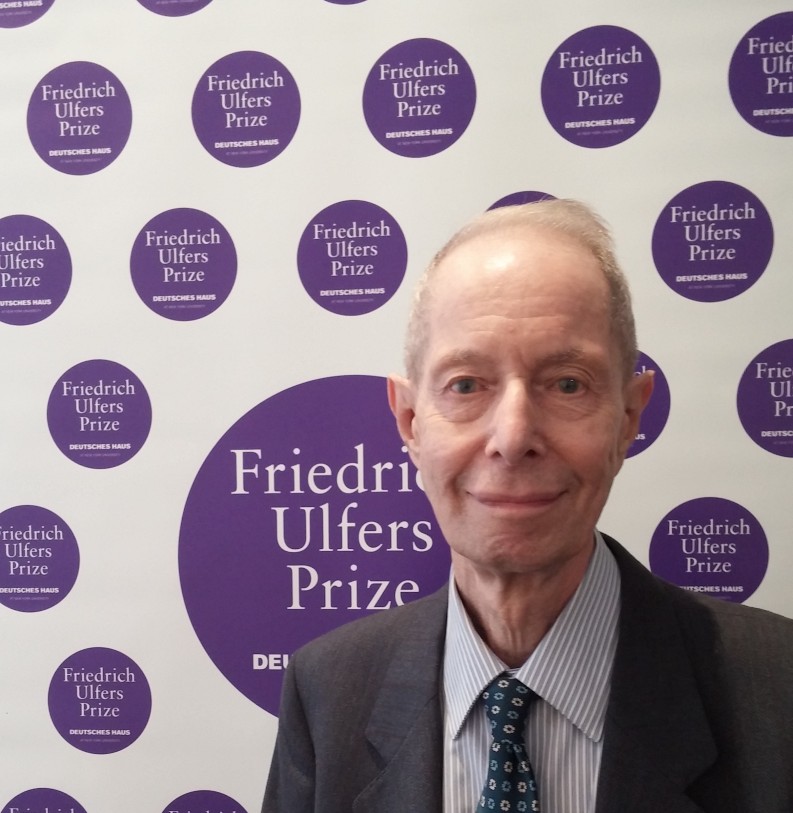 At the opening ceremony for this year’s Festival Neue Literatur held at the Goethe-Institut New York on February 25, German-to-English translator Burton Pike was awarded the 2016 Friedrich Ulfers Prize for his contributions to German literature. In his acceptance speech, below, Pike explains how he taps into the “rhythm” of each book he translates. This, he writes, is the key to making the voices of Goethe, Musil, Rilke and others “blossom” in English.—Hannah Johnson A witty translator wrote that a translation is your book with someone else’s name on it. When I was teaching translation, I would tell my students that in translating prose fiction the words were the least of their problems. First, I told them, you need to identify the book’s or the story’s rhythm, how the words flow; you do that by reading the text aloud and listening. Then you fit the English words and sentences to the underlying pacing of the German, and you would be in business. For example, in translating Goethe’s The Sorrows of Young Werther I determined that the underlying rhythm was a waterfall of words, and I based my translation on that. The result, I think, sounds like Goethe, but in English. One result of this approach through rhythm is that all my translations of prose fiction differ from each other, because each one is based on a different rhythmic model.

I had one graduate student who translated a short story written by a young German writer, but he couldn’t get the story to sound right in English. I asked him if he had read Raymond Carver. He said no. I said to him: “Well, the fellow who wrote this story has obviously read Carver. Go thou and do likewise!” He did, and it worked.

I co-translated Musil’s The Man Without Qualities with Sophie Wilkins for Knopf, under the watchful editorial eye of Carol Janeway. From a translator’s perspective, reading Musil’s text silently made the language seem impenetrable. I happened to discover that evenings Musil would read aloud to his wife what he had written during the day, and I had my “aha!” moment: what looked difficult on the page when read silently was actually a spoken rhythm, and reading it aloud everything fell neatly into place for the translator. Read out loud, The Man Without Qualities blossoms. Then we were confronted with the posthumous papers, a vast trove of some thousand pages that Musil had written over many years for possible use in his unfinished novel. But, never having finished the novel, he never decided what to do with all this material: galley drafts; possible chapters; alternate versions of chapters and revisions of chapters; sketches of characters, sometimes shocking and seen from radically different perspectives; more drafts; and possible ideas. Faced with this new mountain of material Sophie Wilkins bowed out, and from this disciplined chaos I had to select, sequence, and translate what became 561 printed pages. Translating Rilke’s novel The Notebooks of Malte Laurids Brigge presented other problems. Many translations of Rilke into English miss the hardness of his writing: the diamond-hard will behind it, and the precision with which, in his greater works, he revolutionized the language of German poetry. Many English translations of Rilke’s poetry simplify and prettify it, with not a clue to his drive or his sovereign mastery of the medium. The prose too, in The Notebooks of Malte Laurids Brigge, is tightly controlled; it is beautiful, but it has a distinct edge. Rilke is writing the poetic novel that his character, the would-be poet Malte, does not have the will to achieve: Malte has the ambition, but not the will, of the poet who wrote the book. In it, Rilke was overturning the traditional German novel, as in his poetry he was overturning German poetic tradition. The translator must try to convey the willed mastery in this book along with its lyricism.

Flannery O’Connor said that “art is a product of the practical intellect”, and that is certainly true of translating. Theories of translation belong to philosophy, not to the struggle of the translator trying to decide whether “Geist” should be rendered as “mind” or “spirit”. Every writer and every novel or story must be translated on their own terms. So it’s true after all that a translation is your book with someone else’s name on it.