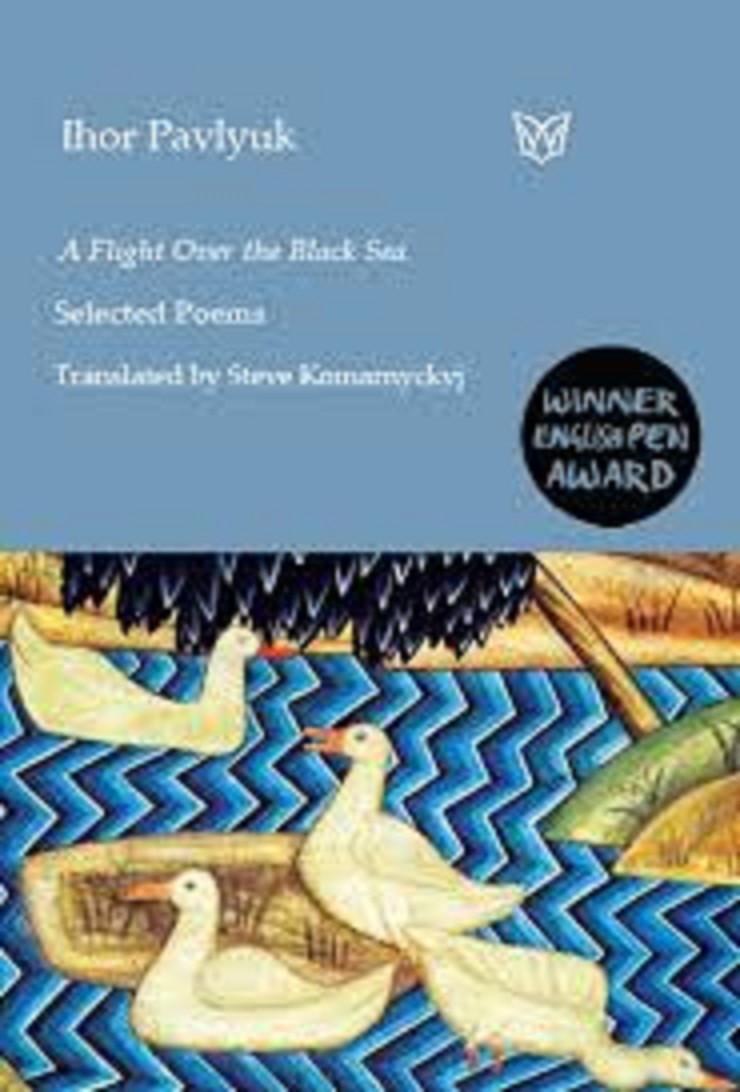 Translator Steve Komarnyckyj describes the triumph of modestly published book of Ukrainian poetry on the global stage and what it says about the world. In July 2011 I sat in the center of Lviv, Ukraine with Ihor Pavlyuk and raised a tumbler of vodka to the success of my translations of his poetry. The book won a PEN promotes award in 2013 and was subsequently voted the reader’s favorite on the PEN World Bookshelf in late 2015. This was a triumph as unlikely as Sancho Panza’s Donkey winning the Indianapolis 500. It has become commonplace to note that poetry books hardly sell in the US and the UK. Translated literature only accounts for three percent of all books published in the US. So the title was a rank outsider in the reader’s poll to select the favorite on the PEN World Bookshelf.

But the book received 2,521 votes, with its nearest rival trailing at 2,070. Some strong books by renowned publishers received little support. Putin’s Russia by Anna Politkovskaya, published by Harvill Secker, achieved only 22 votes. However, A Flight Over the Black Sea topped the poll for a number of reasons. Ukrainian language literature, although the equal of the literature of its neighboring countries, is routinely shunned or ignored by publishers.

If you look at the Penguin Classics range you will see that Ukraine is effectively erased from the literary map. Yet, following the Revolution of Dignity, the Maidan, and the attack from Russia, the country has often been the focus of media attention since 2013 through to now.

Winter on Fire, the documentary covering the Maidan protests, has been nominated for an Oscar. Ukraine has provided us with a visual iconography of the struggle for democracy globally. Riot police clashing shields, walls of burning tires… the suffering of the Ukrainian nation as they overthrew a regime, and particularly the Heavenly Hundred who laid down their lives for freedom, has touched people’s hearts. It seems trivial and tasteless to mention literature in this context. But people in The West now want to know more and the book has helped slake their thirst.

I also work at a newly established publisher, Kalyna Language Press Limited. We ran a social media campaign vigorously marketing the book and the vote. Euromaidan Press, a Kyiv based NGO that sprang out of the Revolution of Dignity, helped us promote the work; they understood that the poetical is the political. Ihor’s poetry was a way to make Ukraine’s voice heard. Fjords Review who have previously published my work plugged the vote. Finally, Waterloo Press, the publisher also got involved. The book topped the poll because we had a clearly worked-out story and a support network across the world. But it also won because I longed for this victory more perhaps than the other authors involved. Why?

During 2012, while I was still working on Ihor’s book, I travelled to Kyiv to present a pamphlet of my translations of Tychyna’s poetry. Yanukovych was still in charge of Ukraine and every area of society was permeated by corruption. I was introduced to a man who was allegedly, I was told, implicated in the murder of an opposition figure. Subsequently, on September 12, 2013, an assassination attempt was made on the head of the writers’ union. Rumors about its cause hissed around Ukrainian literary circles like disturbed vipers. It seemed weird. I couldn’t imagine Tom Stoppard trying to “whack” Harold Pinter. I had seen Ukrainian literature as simply the voice of a nation breaking through oppression, a wildflower cracking through asphalt. But, as I translated Ihor’s poems, I found a more interesting national story. It was one I was determined to help tell.

I have, to echo the title of Ihor’s book, flown over the Black Sea. The two translated novels produced by Kalyna Language Press go on a journey over the Steppe. Raven’s Way is a white knuckle ride with the Cossacks who were fighting for Ukraine’s independence in the twenties. Episodic Memory is the tale of a Steppe childhood, which reads as vividly as if it were written in 3D ink.

I hope you join us as we explore Ukraine, the bottomless well of stories.