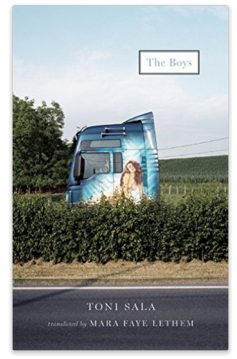 Catalan author Tony Sala discusses his award-winning novel The Boys, recently translated into English, and its themes of tradition, identity and the clash of generations in contemporary society. One of the joys of reading international literature is the strange, often capricious discoveries that happen along the way. A novel from Hungary, for example, changes the way you view the world, or a story collection from Korea captivates you unexpectedly.

The Boys by Toni Sala, is one of those discoveries. In theory, the premise seems simple: two young brothers from the pastoral town of Vidreres, Spain die in a car accident and the consequences of those deaths are shown through the voices of different characters. This simplicity, however, is illusory: The Boys is a modern, visceral, often disturbing look at prostitution, death, the internet, family legacies and the precarious Spanish economy (a stand-in for any economy in the world). These themes are tied together with sharp focus and nothing in the book is superfluous. Through various points of view Sala examines the endless ripples death makes in the lives of intimates and strangers alike.

A brilliant translation into English from the Catalan by Mara Faye Lethem, published recently by Two Lines Press, only strengthens the argument that more (or all) of Sala’s numerous novels should be translated into English.

I was able to interview Mr. Sala by email about The Boys and other aspects of literature.

Mark Haber: The Boys has a seamless mixture of contemporary issues like the internet and the Spanish economy mixed with eternal issues like death and family and the importance of owning land. Was this mixture of old and new something you set out to do or did it emerge from the story you were telling?

Tony Sala: Writing is like spreading a network. This network is made up of the usual literary themes (death, family, as you say, eternal themes, characteristics of what we call “literature”). The novelty is just the reincarnation of these old topics in their current forms. Eugeni d’Ors, an important Catalan author, wrote in the early twentieth century this aphorism, very present in our culture: “Outside tradition there is no real originality. Everything not a tradition is plagiarism.”

MH: The deaths of the two brothers sets off a chain of events (and relationships) in the story. Death reaches further into the lives of the living more than we like to admit, both directly and indirectly. Was there was something specific you were saying about death and its consequences? TS: This is a book about identity, which is a very pressing topic in the Catalan society. Each of the four characters represent a larger approach to the land itself, which must be understood as an approach to oneself. And the element that unites the four characters is death – while also separating them, because everyone reacts differently. I believe death has to do with identity, because it is one of the few things that sets our limits. With death there is no possible discussion. As Epicurus said, when there is death, you are not. Either one or the other. Therefore, death marks our boundaries. The way the deaths of others resonates in us – and we all have that experience from a certain age – helps us to know who we are. The way we relate to death has a lot to do with our way of being, is, in some ways, the ultimate experience.

TS: It wasn’t that difficult, this game of contrasts was a good thing to work with. Extremes meet. Finally one generation becomes the mirror of the other. The problem is that in a crisis there is so little to spread that the fight is for survival. And then, who has more right to the life? Young people who still have everything ahead, or old generations who will not remain much longer? I’m forty-six, perhaps an appropriate age to see both sides of life. The character of the banker and the truck driver can represent both generations.

MH: A brilliant passage of the novel is when Miqui, the truck driver, communicates with women online using an array of different faces that are not his own but show how he wants to be or thinks women will find attractive. I found this symbolic to all of us, how we often put ‘on a face’ to show someone who we are not but puts us in the best light. Even Ernst has a different face in Vidreres than he shows at home with his family. Any thoughts on this?

TS: Good observation about Ernest. Obviously we can assume that Ernest will not explain how the day has gone when he gets home. As I said, this book has to do with identity. Which identity is our true identity? At what point Ernest is more himself? When he is with the prostitute or when he is with his wife and his daughters? The daughters affect his relationship with the two dead boys, and the death of the two boys affects his relationship with his daughters. We need to know something about who we are, but we can’t be sure because we have a thousand faces, not just with the others, but with ourselves. We are also a mask for ourselves. And we are changing the masks our whole life. The only hope is to think that maybe at the moment of dying we will have a small idea, more or less final, of who we are at that moment, where we have come. But then it will be useless …

MH: The story focuses on different characters in different chapters. Of all the different voices in The Boys I thought the most visceral and powerful was Miqui, the truck driver; his anger toward the world, toward women, toward his own father was so authentic. Was getting the voice of certain characters more difficult than others? Which character came easiest?

TS: All of them came easy, but it’s true that Miqui was a character particularly difficult to live with. Primo Levi warns that we must be careful understanding, because understanding can mean justifying or forgiving. And when you live so intensely with a character… I do not know if Miqui or Nil are finally understood. What seems clear to me is that if there is a positive character – other than the dogs – it is Iona.

MH: Could you name some other contemporary Catalan writers whom you admire that haven’t been translated into English and should be?

TS: Many of them have already been translated. Quim Monzo, the master of the generation before mine, or Francesc Serés, from my generation, can be read in English. You should translate our great poets, like Enric Casasses or, especially, Josep Carner.

Toni Sala is a teacher of Catalan literature. He is the author of over a dozen novels and works of nonfiction and has been awarded the most prestigious awards in Catalan Literature. Some of his works have been brought to the stage. He lives in Barcelona.

Mark Haber is the Sales Floor Manager at Brazos Bookstore in Houston, Texas. He is also a juror for the 2016 Best Translated Book Award.