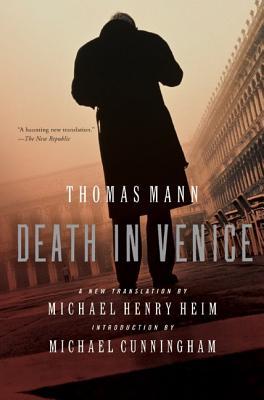 For a century now, Thomas Mann’s novella Death in Venice has endured and takes on different interpretations in the hands of different translators and readers.

“You didn’t even read Death In Venice until I gave it to you!” “That’s right: you only gave me books with the word ‘Death’ in the title.” — from Woody Allen’s Annie Hall Death in Venice may be to Thomas Mann what The Dead is to James Joyce: the novella you can read without having to read The Magic Mountain or Ulysses and yet still feel as though you have the right to say, “Yes, I’ve read Mann!” or “Yes, I’ve read Joyce!”

The story, which first appeared in German in 1912 from Berlin publisher S. Fischer Verlag, was translated into English 13 years later — making this its 91st anniversary in English. Unlike many other works of that pre-World War I era, Death in Venice has not only remained in print but also continues to be a touchstone book of how we view the Old World — along with the elderly — and how you, the reader, see Venice.

And here the readers of Death in Venice fall neatly into two camps: you either love Venice (all romantic gondolas, East-meets-West architecture, silence along the ancient canals) or you hate Venice (the world’s all-time worst tourist trap where you actually have to PAY to enter a church, San Marco Basilica, along with floods, and a surfeit of insufferable honeymooners). No one is apathetic about The Most Serene Republic. Depending on how you feel about Venice is going to color how you view Mann’s minor masterpiece.

What’s remarkable about Venice as a city is that Mann captured its moribund zeitgeist which had infected the city since at least the time of Napoleon’s plundering, or even earlier, its hold-out against the Ottoman Empire.

A Place for Death… Generally speaking, Venice became a place to die (Baron Corvo, Ezra Pound, Titian) or go insane (George Eliot’s honeymoon was ruined when her newlywed husband went mad and jumped out a window and into a canal) or go to prison (Casanova) via The Bridge of Sighs. In a sense, Venice is not unlike New York’s Chelsea Hotel with its hit-list of famous writers and artists who died here.

In Venice, then, death is quite romantic (to quote Bob Dylan), and that’s of course, part of the appeal. Venice lives, or at least survives, in the face of death, whether in the form of the plague (which took down Titian), or the interdicts placed on it by the Popes, or Bonaparte’s invasion and vast looting, or its uneasy balance between its independence, land-and-sea-grabs by the Austro-Hungarian Empire, and the now defunct Kingdom of Italy.

Death in Venice is an uncomfortable story on a number of levels, not the least of which is the obvious outcome. Unlike Joyce’s The Dead, where no one actually dies in the story, Death In Venice is truth in title-ing: someone is definitely going to die, and it’s either going to be the old author with writer’s block or the young boy whom he lusts after.

If death is an uncomfortable subject, pederasty can’t be far behind. However, what the protagonist Gustav von Aschenbach merely dares to dream about — namely carnal relations with Tadzio, a pre-teen-aged Polish boy — another real-life author who actually did die in Venice, in 1913, the very year Death in Venice appeared in German was Baron Corvo aka Fredrick Rolfe — who lived out what Aschenbach dreamt.

Rolfe reveled in his homosexual-fantasies with a kind of Oscar-Wilde-meets-Liberace abandon: acting as an epistolary pimp for his friends whom he implored to come to Venice in letters that even today make one blush. Rolfe relished his relations with young Venetian boys and, along with the photos he took of the naked Italian youths, the very real Rolfe made the fictional von Aschenbach’s verboten relations his dying reality.

Choose Your Own Translation

Death in Venice has gone through numerous translations, especially into English. Ten years ago the late Professor Michael Henry Heim was awarded Helen and Kurt Wolff Translation Prize for his version of it (Harper Perennial, 2005). However, for the past twenty years I’ve favored Stanley Applebaum’s Dover Thrift Edition, replete with a Foreword, Notes, and Commentary, all for only a dollar (which is what the Heim ebook costs).

But there are plenty of other fine choices: H.T. Lowe-Porter did one of the earlier English translations (Knopf/Vintage) in 1930, which remained the standard for decades. Jefferson S. Chase, in his 1998 Signet Classic Edition, stated that “My translation focus not only on content but also seek to render the complexity of Mann’s style into contemporary American English.” [emphasis added] (p. xvii.) Professor Joachim Neugroschel’s 1997 Penguin Classic translation tells us:

“In Death In Venice, the artist as outsider is one theme. On its simplest level the story is Balzacian — and Freudian: a man who has always repressed his sexuality and sublimated it entirely into his creative duties is suddenly overwhelmed by a love that is both platonic and plutonic. His Protestant ethic and discipline both drown in his physical and spiritual hormones…to fight against the loss of self-control, against the overpowering libido, Mann’s syntax clamps down on the sun-drenched, salt-sprayed voluptuousness…” (p. xv).

The pleasure of this text, to mis-use Barthes’s term, is that so much is packed into such a short book. It is routine to say that Joyce’s The Dead was a thumbnail sketch for A Portrait of the Artist as a Young Man, and I suppose scholars can make the case that Death In Venice is a thumbnail sketch for The Magic Mountain. Themes of passion, psychological and physical illness, spiritual and emotional paralysis — plus the introduction of Freudian and Nietzchian leitmotivs — are here in miniature and we are spared Mann’s ham-fisted, lengthy moralizing that pervades The Magic Mountain.

In sum, it is a love story — but to me at least, it’s not “simply” a story of forbidden and (unlike Lolita) therefore unrequited love between a very old man and a very young boy. Rather, and I’m hardly the first to come up with this, it is a love story of a city — very much like Rolfe’s The Desire & Pursuit of The Whole: A Venetian Romance (written c. 1910-13, but not published until 1934). A sinking city, a city built on a swamp, a city that almost shouldn’t exist practically speaking, but for those of us who love it — and here I unashamedly cast myself in that camp — a city you could die in.