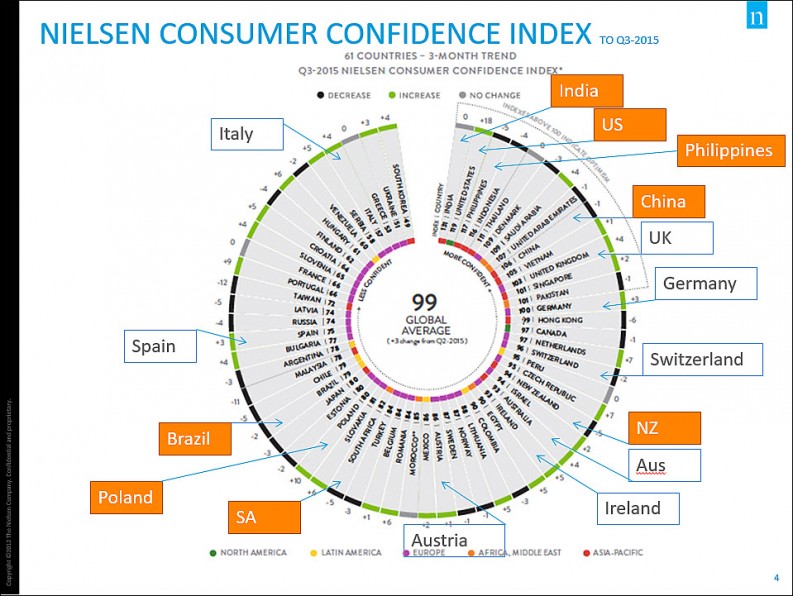 The good news is that people think there’s good news.

In a webcast this week in London Book Fair’s #Quantum16 Virtual Conference, Nielsen’s Andre Breedt started his survey of key markets with a check of consumer confidence. He put special emphasis on the #Quantum16 markets: Brazil, China, India, The Philippines, Poland, New Zealand, South Africa, and the United States. The data was drawn primarily from the Nielsen Consumer Confidence Index of the third quarter of 2015, the latest available stats, with some additional sources used for areas in which Nielsen as yet doesn’t have a full service running.

As the Q3 2015 report at Nielsen Insights reported, “Global consumer confidence increased three index points in the third quarter to 99, the highest level since 2006. Optimistic sentiment for job prospects, personal finances and spending intentions increased in nearly half (48%) of all measured markets, but uneven growth continues around the world as confidence stabilizes or grows in many advanced economies and declines in many emerging markets.”

Typically, a jump that includes the particularly optimistic rise of some 18 points in the US is thought to mean that more discretionary income is available: people might buy more books in 2016.

Breedt cautioned, however, that in the mix of those eight areas being considered by the #Quantum16 exercise, it’s important to remember that consumer confidence registers “what people feel about the economic situation, not necessarily the economic reality. It varies country by country and, you could argue, by the national psyches of the countries, as well.”

Bad news travels fast, said Breedt. “Bad news in politics is almost immediately felt by people,” while the effects of economic change “always takes longer to filter through.” The kind of consumer confidence boosts he showed us may, of course, not quite reflect reality. Negative news, as he pointed out, tends to show up very quickly in studies and surveys. Good news can take a while to register. Brazil, he added, has seen its fourth consecutive quarterly decline in consumer confidence. At a confidence rating of 79, it’s the country’s lowest score since 2005—”a combination of the global oil prices, the local economy, political scandals … the devaluation of the currency.” But the Brazilian economy overall looks more robust that this might indicate, Breedt said, and a rating of 79 is not necessarily deeply negative.

Also of interest, Breedt produced a mapping of Nielsen BookScan measures of the pertinent territories in terms of unit growth in 2015. Here, we could see a sharp rise in China (30.5%). But in some cases, rises are misleading, Breedt pointed out, as in the 10.9% rise seen in Brazil which is a bump driven as much by inflation (similar to South Africa’s 18.2% rise) as to actual increasing units shifted.

In general, this map graphic gave us a sense for the lag in economic recovery that might be at play in Continental Europe. The UK (+3.7%) and Ireland (+2.6%) have turned the recovery corner faster than other parts of Europe, it seems, with some areas like Poland still registering a 14% decline in units in 2015. (In an earlier #Quantum16 event with our colleague Rüdiger Wischenbart, it came out that book sales have seen a 20% decline in the last five years in Poland, driven, Breedt said, mainly by a loss of many bookstores in a market not yet making the flight to digital reading.) For snapshots on specific markets looked at in our webcast, Breedt’s presentation is terrific.

Pay attention, for example, to the interesting comparative numbers of ISBNs it tracks in each country. The BookScan system, remember, tracks physical sales, not digital sales, which are bedeviled by uneven ISBN application and incomplete sales data. In terms of ISBN numbers tallied by BookScan in 2015, the US market, for example, showed 2.4 million. Breedt says that the criterion here is that an ISBN is counted if a title sells one copy during the course of a year. This shows us, then, that Ireland’s 303,064 ISBNs is a very robust number for so small a country by comparison to the States, and Italy also comes in with a very fine showing of 438,146 ISBNs in 2015.

There are also sharp differences to be seen among these markets in genre shares-by-volume tracked by Nielsen. Looking at the whole inventory as Children’s, Non-Fiction, and Adult Fiction, for example, reveals the largest centers of interest in children’s books to be in Australia and New Zealand. China is by far the leader in interest in non-fiction, while Germany and Italy seem to have the strongest interests in adult fiction. You’ll also find the cover of E.L. James’ Grey giving you the hairy eyeball from many of the country-by-country captures of popular titles.

That comeback girl Harper Lee turns up in the lists quite a lot for Go Set a Watchman, of course.

And being on something of a virtual whistlestop tour, ourselves, during our global look at various markets, maybe it was fitting that Paula Hawkins’ The Girl on the Train (La Ragazza del Treno) was spotted among the big sellers in many markets.

More presentations are available at the #Quantum16 site, in case you were unable to look in on the virtual conference Wednesday.

London Book Fair’s Quantum Conference itself is on Monday, the 11th of April this year at London Olympia. It is the new iteration of what was previously called Publishing for Digital Minds, and is under the direction of Orna O’Brien. More information on it is here.