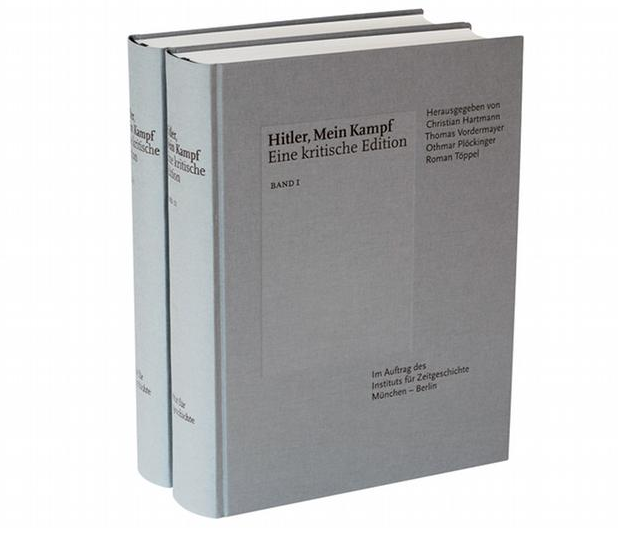 Mein Kampf is now in the public domain in Germany 70 years after Hitler’s death, and a new, scholarly edition of the hate-filled manifesto is causing controversy. At midnight on December 31, 2015, the 70-year term of copyright to Adolf Hitler’s Mein Kampf expired in Germany. The copyright had been owned by the German State of Bavaria since Hitler’s death in 1945, and ever since, Bavaria has prevented the publication of any new editions in Germany.

Now that the text has fallen into the public domain, anyone can publish and sell Hitler’s manifesto in Germany. The first new edition to hit the shelves — amid plenty of controversy and discussion — is a heavily annotated, scholarly book published on January 8, 2016 by the Institute of Contemporary History (IFZ) in Munich.

This scholarly version of Mein Kampf includes over 3,500 annotations put together by a team of editors, scholars and experts. It’s priced at 59 euros and was released with an initial print run of 4,000 copies, which sold out the same day. Pre-orders have topped 15,000, and the IFZ has planned a second print run expected to ship next week.

According to The Boersenblatt, Simone Paulmichl, Head of Press & Public Relations for IFZ, stressed that the Institute’s edition of the manifesto was published at their own expense and that they didn’t take on this project in order to make a profit. Instead, the goal, according to the IFZ’s website, is “to thoroughly deconstruct Hitler’s propaganda in a lasting manner and thus to undermine the still effective symbolic power of the book.”

The IFZ isn’t the only organization making it clear that they do not want to profit from this book. A note on Amazon.de says that its profits from the sale of the book will be donated to an organization that supports victims of National Socialism.

Despite the first print run selling out on the first day of publication, there have been mixed reactions to the reappearance of Mein Kampf on German bookshelves. At a time when far-right politics and xenophobia are gaining some traction in Germany, should Hitler’s hate-filled text be more widely disseminated? Or should the manifesto be more carefully studied in order to understand what makes it evil?

The Boersenblatt reports that, among other bookstores, two of Germany’s largest bookstore chains, Hugendubel and Thalia, have chosen not to sell the book in their physical stores but only online. When asked by FOCUS Magazine to explain this decision, the booksellers gave little detail. Hugendubel spokesperson Sophie von Klot told FOCUS, “we don’t have to display every title.”

The German Teachers Union decided to use the IFZ’s annotated edition in schools across the country. Union president Josef Kraus told Deutsche Welle, “What’s much more dangerous is remaining silent or completely banning the book. Nowadays, with the power of the Internet, everyone has access to everything. So it’s more important to me that something like this can be discussed in a differentiated and critical manner.”

While the Central Council of Jews in Germany has cautiously approved of the annotated version as a way “to explain National Socialism and the Holocaust,” other Jewish organizations have understandably spoken out against the new publication of Mein Kampf, including the World Jewish Congress and the Conference on Jewish Material Claims Against Germany.

But as Steven Luckert points out in The Atlantic, “With only a few keystrokes one can download a copy, in any one of a variety of languages, off the Internet for free. Neo-Nazis—or ISIS fanatics, or any other extremists—haven’t had to wait until 2016 to get the text, and legal prohibitions haven’t stopped anyone from obtaining or disseminating it: If people want it, they already have it.”