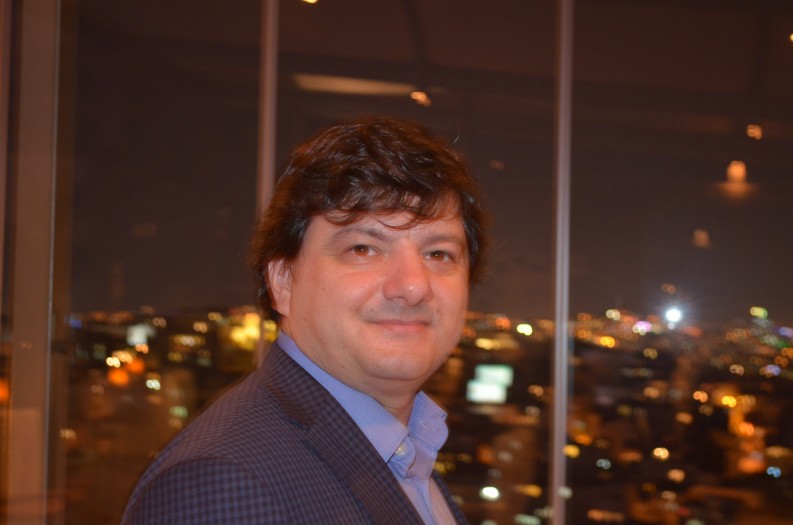 Mehmet Demirtas has channeled his creativity into the Istanbul Tanpinar Literature Festival, which he views as a neutral gathering place for cultures.

Mehmet Demirtas used to check the crotchets and accidentals on Bob Marley’s sheet music; now he runs one of wider Europe’s growing literary festivals, the Istanbul Tanpinar Literature Festival (ITEF) which takes place annually in Istanbul; this year, it runs May 9-15, 2016. Just as music can be a uniting force, bringing people together, so Demirtas believes literature has a similar power.

Demirtas is one of those people who has had a whole other life before founding the festival of which he is now director. He is currently finalizing plans for this year’s fair, speaking to sponsors (the toughest task of any festival organizer) and discussing who is available with publishers. This year will be the eighth edition of the fair, which has two main venues in the famous East meets West city, one on the Asian side, one on the European, as well as satellite events across the country.

“Since we began we have featured more than 400 writers,” Demirtas told Publishing Perspectives, speaking in a rooftop nightclub in his home city of Istanbul, where Turkish novelist Ahmet Umit was launching his latest book (Demirtas’ wife Nermin Mollaoglu of the Kalem Agency is Umit’s agent) late last year. “We always have a mix of Turkish and foreign writers, so 2015 was the centenary of the Gallipoli campaign, and we had Louis de Bernières, whose latest novel is based around that, and also the Anzac expert Jonathan King.

“We never refuse any writer. We have had Armenian writers, writers from Israel, Korea, a publisher from Saudi Arabia … We can be divided, but literature can make a mosaic and bring us together”

The festival takes its name from the Turkish poet, novelist, essayist and critic Ahmet Hamdi Tanpinar whose estate Mollaoglu’s agency represents and whose titles are now available in 45 languages. “He was an interesting figure, a Democrat and member of the Turkish parliament, and someone who dealt with questions of identity, who asked ‘where is my place?’”

Questions of identity have faced Demirtas too, since his life had gone in quite another direction at one time. Born in Istanbul in 1973, his father was from a small town in Anatolia, “the first boy in the village to go to university. [He] became a lawyer, championing workers’ rights. Both my parents were members of the Communist Party.”

Demirtas attended the French Lycée in Istanbul and then read Theory of Music at the Conservatoire Nationale in Lyons, France. This is where Demirtas’ other life begins, for he is a pianist and composer who has written many pieces for solo piano and chamber ensembles, as well as choral works including “Yagmur,” which means “Rain,’ for a triple a capella choir, which can be seen below.

A masters followed in musicology, the aesthetics of music and composition and he began to organize concerts in Lyons. He also had a sideline as a DJ, presenting his own show of news and music called “From Anatolia” for five years.

At the end of this period he began working for EMI, checking musical scores, which is where Bob Marley comes in. “This is just before it all went digital, when it was still done by hand. So I’d be checking the notation on Queen, Bob Marley, Madonna …”

He returned to Istanbul in 2001 and became an assistant in the arts management department of a university and then a program manager for musical events with Yapi Kredi Yayinlari (YKY), one of Turkey’s largest publishers, which also had a performing arts side to its business. “The publisher owned a cultural center where I became event coordinator, putting on theater, dance, classical music, jazz …”

It was while here that he met his future partner, Mollaoglu, who was selling rights for YKY’s publishing side. Although ITEF is run separately from the agency, there is obviously much useful cross-fertilization, especially with Mollaoglu’s extensive international publishing contacts.

“We are planning 20 children’s and 20 adult events for this year’s festival,” Demirtas says. “Each year the children’s part gets bigger — and that’s good for growing my future festival audience. The Israeli author Etgar Keret was with us in 2010 and he said what he liked about it was that it combined an amateur spirit with professionalism — he urged us to keep it being run by volunteers, which gives it an authentic feel.”

His favorite writers include Gide, Dostoevsky, Marquez, Neruda and the Turkish poet Nazim Hikmet. And after a tough week, trying to persuade sponsors to get on board, he finds the piano a perfect way to relax.

“It will be Beethoven, or Stravinksy’s The Soldiers’ Tale. I pass on my negative energy to the keyboard …”