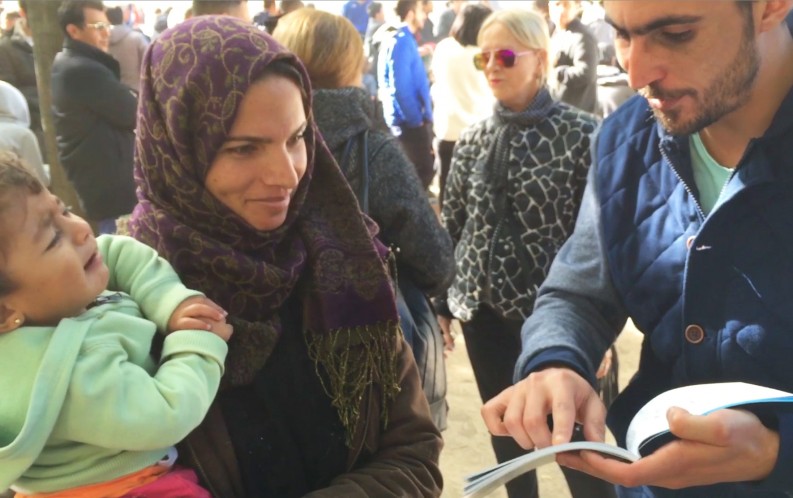 In 2005, Museum of Modern Art design curator Paola Antonelli mounted one of her most famous exhibitions, SAFE: Design Takes on Risk. There were adult gas masks designed with clear face coverings so that parents wearing them wouldn’t frighten their own children. And café chairs were created with strategically placed hooks to anchor bags and purses against theft. In Olivia Snaije’s account of Gosia Warrink’s ICOON book for refugees, we see a new example of how design thinking—this time in a publishing context—promotes ways, as Antonelli said it years ago, “to mediate between disruptive change and normalcy.” —Porter Anderson Since December, aid organizations helping refugees have had access to a precious tool: a picture dictionary with 1,200 symbols adapted to refugees’ needs.

It’s the brainchild of Gosia Warrink; a Berlin-based designer who in her other life creates streamlined oxidized copperplate cutouts, wire drawings and light installations. In 2007 she designed ICOON, a picture dictionary destined for tourists, printed via her small publishing house AMBERPRESS.

Last spring Warrink was interviewed on a local television outlet about her dictionary. She mentioned that travelers who used her dictionary included people who were illiterate or unable to speak, and that the problem was the same for everyone: communication. As the refugee crisis in Germany became more urgent in the summer, Red Cross workers who had seen Warrink on television contacted her about her book.

At first she was able to help by donating more than 2,000 copies of ICOON for travelers but quickly realized that not only was it impossible to absorb the cost of printing for the number of books required, but that she had to adapt the book by adding “many new symbols like halal, diseases (scabies, polio … trauma) also for headdresses (hidschab [hijab], burka) and, very very important for me, new symbols for peace and democracy,” said Warrink.

“I decided to make a new version: ICOON for refugees.” Warrink sailed into uncharted territory: “ICOON for refugees is the first big charity work for me and my small publishing house,” she said.

With help from the Red Cross, other aid workers and friends, some of whom were doctors, Warrink researched and created symbols that were needed, and in October launched a crowdfunding campaign which by November was successful. “We were able to print 30,000 books and to make an additional free app for android,” she said, “Before Christmas we sent almost all of the books to aid organizations and people helping refugees.”

Now, she is planning a second edition. And there is also a leaflet with 300 symbols that can be downloaded free of charge on her website.

Warrink said the most rewarding moments are “phone calls or emails from people who are working with my books and want to thank me because otherwise they wouldn’t be able to do their jobs and help refugees.”

Although each phase of the project had its own challenges—making a crowd funding video on her smartphone and editing it with an app when her filmmaker skedaddled was one—she says she wouldn’t have a changed a thing; despite the challenges the end result, she says, was entirely worthwhile.