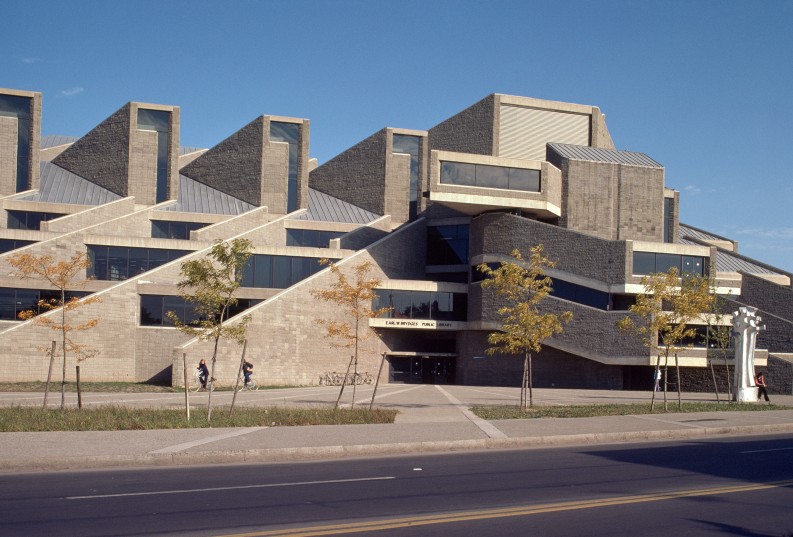 In the past, libraries primarily served as factories of learning, a concept that was sometime expressed literally in their architecture. One of my favorite books of 2015 was Alex Johnson’s Improbable Libraries: A Visual Journey to the World’s Most Unusual Libraries (University of Chicago Press). This gem includes an entire chapter on libraries brought to you, literally, by animals. Also present: the NYC-phone-booth-cum-libraries that the “Department of Urban Betterment” dreamt up, as well as the Dr. Who-esque British Telecom phone-boxes now part of a “take-a-book/leave-a-book” pay-it-forward/pay it back. The winner for me? A custom-built home library in Texas with—get this — a bosuns’ chair.

One group that didn’t make it into this otherwise charming book: the library as a factory of learning. Admittedly, this is a small group — indeed, if anything it sounds like the subsection of a graduate-level architecture class. That said, there are two libraries that have played a large part in my life that were conceived of and designed as factories: The Earl W. Brydges Niagara Falls Public Library (which actually looks like a factory, see above), and The Rev. Theodore Hesburgh, C.S.C. Memorial Library at Notre Dame, that still kind of functions as one.

To begin with the Hesburgh Library, which almost anyone who has suffered through a college football game knows by sight: The colossal Hesburgh Library sports on its south-side a full-length, fourteen-story, multi-color mosaic known as “The Word Of Life” which the rest of the world calls “Touchdown Jesus.” The mosaic looms large and looks at the Notre Dame Stadium, perfectly in line with the goal posts.

The plethora of gold-leaf imagery from the Old Testament icons that decorate the exterior of the arcade of the Hesburgh library is kept on the outside. Inside the library is, to say the least, spartan — and that’s being generous. The classrooms inside this monolith are not only totally windowless, but painted in colors reserved for a jail-cell. And that’s in the upper-floors. The basement is a labyrinth of Name of The Rose proportions, where there are, naturally, not only very few windows, but very very little artificial light. Even the quaint “Rare Book Room” is at best, serviceable.

If this sounds like an architectural abortion, that’s not quite it: Fr. Hesburgh, the late long-serving President of the University, it is said, wanted “his” library (though he refused to have it named after himself (a) until the donors threatened to withdraw the funding, and (b) he retired as president) to be a no-nonsense, all-business, no-distractions, “factory of learning” for students.

After the gold-cross on the top spire of the Basilica of the Sacred Heart of Jesus, and the golden statue of Mary on top of the Golden dome, the Hesburgh Memorial Library, the third tallest structure at Notre Dame, flattens out just like the former New York City World Trade Center Twin Towers used to, as if to say: “We COULD have kept building taller, but modesty kept us from going any higher.” Indeed, due to the flatlands of Northern Indiana, Hesburgh Memorial Library looks even taller than it actually is. When it was completed in 1963 as “The Memorial Library” (the Hesburgh Moniker didn’t come till he retired from the Notre Dame Presidency in 1987) it was one of the largest academic libraries in the world.

A Library with Chimneys

Where the Hesburgh Memorial Library went for a functional, soaring, obelisk-esque edifice The Earl W. Brydges Niagara Falls Public Library by Paul Rudolf, completed one decade after the Notre Dame structure, seems to stretch out like a crazy-ass “Hey-Look-At-Me!” computer-meets-a-factory and comes to life.

THIS is the library I grew up with, and to a large degree grew up in, as it housed not only a children’s library, but on the second floor a theatre where free movies were shown, and on the uppermost floors, the archives of The City of Niagara Falls—including a real live archivist—worked.

The exterior of The Niagara Falls Library is “expressionistic” which I think is another way of saying that a lot of it is simply just for show: there are four identical towers that seem to mimic factory chimneys, but functionally they let in very little light—and a lot of rainwater—and had to be revised. There are faux-flying buttresses that stretch almost to the street at strange angles that add absolutely no space to the interior of the library, but chew up a ton of the lawn in front of it. In fact, the original (and more radical) design was carried out so poorly (to walk inside the library during the rainstorm was to walk back into a rainstorm, it was so leaky), that it had to be scrapped and for several years the contents of the Brydges library was moved BACK into the original Niagara Falls Carnegie Library down the street (a modest, nondescript, smallish structure).

However, once the holes were plugged, library patrons (in a City that, at the time of the library’s construction numbered only 70,000—and now only 45,000) were treated to a first-class library that inside allowed you to see from the floor of the central reading room right up to the (now dry) ceiling—and take in the overhanging mezzanines of the second and third floors, too.

The choice of a “factory” template for a library in Niagara Falls was a bit of genius: for the better part of a century the city’s denizens were employed by major factories along the Upper Niagara River (DuPont, Hooker Chemical, Carborundum, Oxy) and had to schlep into awful-looking buildings that not only poured pollutants into the River (and Love Canal), but onto the employees themselves. What better way to reverse this aversion to factories that took away life than to create a one-of-a-kind (I’ve never seen another library that even resembles the Brydges one) “factory of family learning.” In fact, back in its earliest days the library also sported an outdoor series of play-forts and basketball courts by the back entrance (right where the “children’s section” of the library was).

Of course there are numerous other examples of factory-libraries that could be mentioned. And if you think about it: once you get into the stacks of the Sterling Library at Yale University or St. Augustine’s at St. John’s University in Queens, New York, the academic library in general, is pretty no-nonsense. However, these buildings (and most libraries) are built to look beautiful, not functional (cf. the odd beauty of Yale’s Beinicke Rare Book Library — see above). Still, Alex Johnson’s Improbable Libraries is worth a look—and if you are visiting Niagara Falls on a honeymoon or Notre Dame for a football game, be sure to stop in their singular factories of learning.