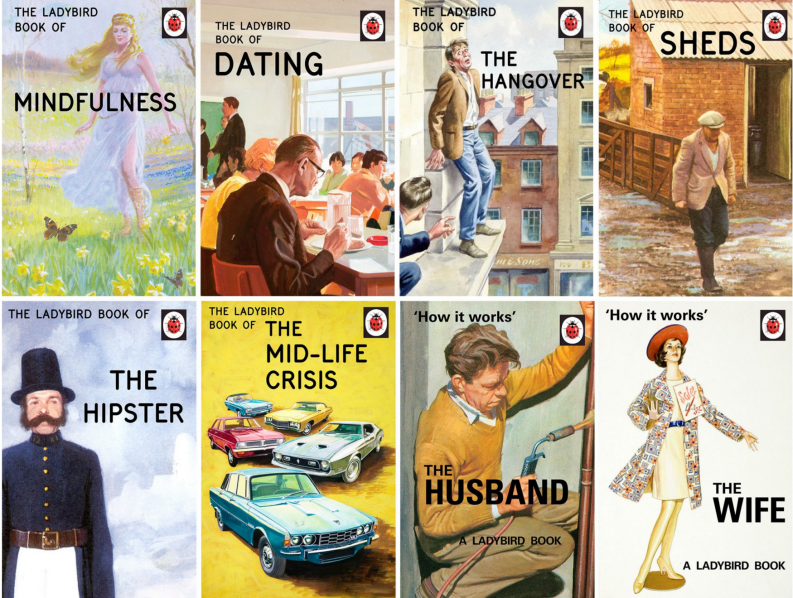 In the UK, “updated” Ladybird books have sold more than a million copies.

The bestseller lists in the UK this past Christmas concealed a curious story, one that raises interesting questions about who “owns” ideas and who — if anyone — copied whom. It’s a saga that some see as a David and Goliath tale of the big bad conglomerate allegedly ripping off the plucky independent artist/author/publisher. It is also about satire about copyright and what is or isn’t permissible.

An explanatory note for non-UK readers is needed here. Ladybird is one of the most famous names in children’s publishing. In the UK, pretty much anyone over the age of 30 grew up with these paperback-sized, slim hardbacks that explained the world to children. The Ladybird books contained a very particular, innocent style of illustration, a look that is instantly recognizable to many UK readers. The original books were full of “perfect” traditional families: mother in the kitchen in her apron, father with his screwdrivers fixing something. They were ripe for spoofing — and this is where the story becomes a little more complicated. Back in 2014, the London-based artist Miriam Elia self-published her own spoof Ladybird title called We go to the gallery, co-written with her brother, Ezra. It was a perfect imitation of the Ladybird style with very funny text that poked fun at modern art. Elia published it not just as satire, but as a work of art in its own right. And it is also very funny. The youngsters, Susan and John, are being taken to the art gallery by their mother: “‘There is oil on the floor,’ says John. ‘The oil is all the blood shed by the US government in its illegal wars,’ says Mummy. ‘Golly!’ says John.”

Elia sold 1,000 copies at £20 each — until PRH’s legal department snapped into action. Elia had used the Ladybird name and elements of its illustrations, and the publisher accused her of infringing its copyright. It allowed her a month to sell enough copies to cover her costs, but said that further copies would have to be destroyed. “They were pretty unpleasant,” she recalls. “The frustrating thing is that I know I could have sold a lot of copies during the six months they banned me from doing so. I started a Kickstarter campaign to cover my legal costs, and they threatened to find everyone who had bought the original books and demand them back by using my Kickstarter database. I presume this was never done, it was just a pointless threat.”

She brought out a new edition to which she made some changes. Ladybird now became “Dung Beetle” and she used her own models for some of the illustrations. She sold 5,000 of this second edition and followed it with a 20,000-copy mass market third edition. To date she has sold nearly 60,000 books.

The threat of legal action receded following an adjustment to UK copyright law relating to “caricature, parody or pastiche,” and PRH also apparently failed to provide copyright documents to support its claim.

The case received a lot of publicity, some of it not too flattering to PRH. There is nothing the media likes more than the lone individual standing up to the mighty conglomerate. Rather embarrassingly for Penguin, Elia also received support from someone with a strong connection to Sir Allen Lane, the founder of Penguin itself (hence the Allen Lane non-fiction imprint today). She was sent a statement from Mark Dolley, whose father Christopher, was appointed by Allen Lane as his successor in 1969. Christopher Dolley served as both Director of the Penguin Publishing Company and was later joint MD. He wrote: “Both Lane and my father must be rolling over in their graves at Penguin today both missing a commercial opportunity and also making a crass attempt to stifle art. Far from trying to ban her work, both would have offered Ms Elia a commission … Ms Elia is to be commended for her contribution to the spirit and memory of a great British publishing tradition.” A Vicious or Virtuous Circle?

But did Elia herself copy the idea? Back in 2003, a young group of writers, including Jason Hazeley and Joel Morris, put together a parody of local newspapers called The Framley Examiner, also published by Michael Joseph. This book included a page of fake Ladybird fairy tales, with spoof covers and blurbs. They are not a million miles from the titles that have been flying off bookshop shelves in the last few weeks. A quick Google search can unearth other Ladybird spoof covers, too.

However, Elia is adamant that she not see these. “I can categorically state that I had never seen those spoof covers — they weren’t books, just spoof titles. Regardless, these spoof titles were takes on Grimm’s fairy tales, which has nothing to do with the “Peter and Jane” series I parodied [she later changed these names to Susan and John]. I was inspired by my own personal collection of 100-plus Ladybird books. The work is entirely original in that it was the first entire book parody, creating a physical object that included painting, writing a new story, designing, binding and printing the books on a 1960s printing press. The book developed over three years as framed prints that were shown in several London galleries, en route to becoming an actual book. Jason and Joel did not do that.”

But get this: Hazeley and Morris, who put together The Framley Examiner title with its page of Ladybird spoofs, are also responsible for the current Ladybird spoofs. So it could be argued that far from copying Elia, they were simply copying themselves!

“The idea for the books came directly from Jason and Joel themselves,” says MJ’s Publishing Director Rowland White. “The Hipster was on their original list of suggestions (they originally thought it might be a spoof of the Great Civilisations series (Great Civilisations: The Hipsters). As I understand it, they were having a drink and discussing which publisher, in a perfect world, they’d most like to be published by. They ran through a few obvious and illustrious names like Faber and Jonathan Cape until they both settled on Ladybird. This has been a real labor of love for them. They love that original Ladybird art, and this was an opportunity to showcase it in a new context.

“They produced some sample pages of The Hipster — all of which are in the finished book — which they sent in with that list of possible titles. I’ve worked with them for years and so I didn’t need much persuading about how brilliantly they’d do it.”

So it seems there can only three scenarios:

Elia believes it is the second scenario that is the most likely. “Through mutual friends in the comedy writing world, I know that pages from my book were being shared by Jason and Joel on Facebook before they announced theirs. The fact the book had 1.5 million shares last year proved that it opened a gap in the market for Ladybird, and completely revived their brand. I did them a favor, not the other way round.

“We go to the gallery is an artwork — it is not parody for the sake of parody. They knew it opened up a whole possibility. In a way, I don’t begrudge them. It happens. My real upset is with Penguin. I just wish they’d said, ‘we respect what you’re doing.’ I opened a door for Jason and Joel and Penguin has made masses out of it.”

Perhaps Elia’s book planted the seed of their own idea, perhaps it didn’t. You could argue it doesn’t much matter. Everyone is influenced by things all the time. Faber has just announced a sleep aid book — Dozy Bear and the Secret Sleep. Would it be doing this if PRH hadn’t had the success with The Rabbit Who Wants to Fall Asleep? Publishers “copy” each other like this all the time. Just look how many adult coloring books there are.

Elia clearly still feels bruised by the whole saga. “I have been scared at times, and I have been in tears. I am a bit sick of it, to be honest.”

For all sides though, the story at least does have a happy-ish ending. Elia is receiving far more help from the success of the Michael Joseph spoofs than PRH is receiving from her own single title. Her book is being displayed with the other titles in bookstores, even though it is not part of that series. In that sense, she is having the last laugh, though laced with bitterness because she feels she suffered many lost sales through their legal threats. But most people who buy Elia’s book do not even realize it has nothing to do with the PRH titles.

The series has undoubtedly given PRH the bestsellers of recent weeks. The sales figures keep rising, and there have been nine reprints. Their withdrawal from legal action allows the company— albeit through gritted teeth — to say that it is helping an independent artist and publisher flourish, too. But it is perhaps significant that PRH will not comment on the wider case, preferring, as a spokesperson said, “to focus on Jason and Joel and the new books we have coming. We are publishing How it Works: The Mum next month, with more to follow.”

Who would have thought that these long-ago, innocent children’s books would have given rise to such machinations? It has been a curious episode in publishing history.