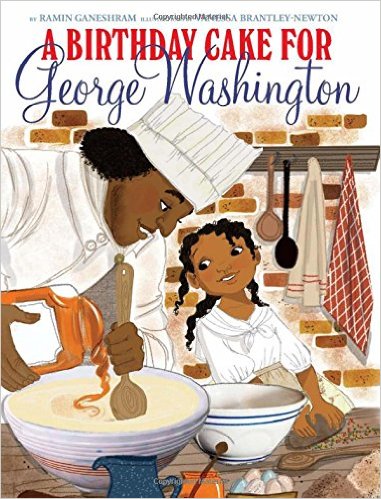 At the Huffington Post, Deborah Menkart reported on a “firestorm” that erupted when earlier this month, Scholastic released a children’s book, A Birthday Cake for George Washington by Ramin Ganeshram and illustrated by Vanessa Brantley-Newton, which featured “smiling slaves baking a cake for George Washington,” and a back cover that showed Washington and his “enslaved chef, Hercules, arm-in-arm, like best buddies.”

And it got worse. Menkart writes that the images of “seemingly enslaved African-Americans working in the kitchen” were “underscored by Hercules’s closing words” when he serves Washington his cake: “An honor and a privilege sir…Happy birthday, Mr. President.”

As Menkart writes: “The story never offers children a hint as to why it was not a ‘privilege’ nor a smiling affair to be enslaved. Nor do readers learn that the conditions were so dire that Hercules escaped on Washington’s birthday the following year, despite having to leave his children behind.”

Not surprisingly, early reviews were critical. The School Library Journal called the book “highly problematic” and Kirkus said that it as “an incomplete, even dishonest treatment of slavery.”

Scholastic did not respond to the reviews. But a four-day grassroots campaign led by librarians, social justice groups, activists from BlackLivesMatter and journalists did the trick — pressuring the publisher via traditional and social media, to recall the book, releasing the following statement on January 17:

“Scholastic is announcing today that we are stopping the distribution of the book entitled A Birthday Cake for George Washington, by Ramin Ganeshram and illustrated by Vanessa Brantley-Newton, and will accept all returns. While we have great respect for the integrity and scholarship of the author, illustrator, and editor, we believe that, without more historical background on the evils of slavery than this book for younger children can provide, the book may give a false impression of the reality of the lives of slaves and therefore should be withdrawn.”

This isn’t the first time that Scholastic, along with other publishers,have been forced to recall books from publication. And as Menkart notes, the protests regarding A Birthday Cake for George Washington are simply part of a greater campaign for children to “learn the truth about history and the world today.”

“While this victory is empowering, the fight itself is disheartening because the battle against the portrayal of ‘happy slaves,’ of people who were less than human and who were being well cared for is a hundred years old. The need for accuracy, not for sweetening, with regards to the enslavement of Blacks in America is critical to this country. This era in American history has shaped our national identity and until we get it right, we will continue to be encumbered with racism.”

And as Menkart concluded: “While there is much work to be done, this victory is an important milestone and a reminder of the power of collective action and truth telling.”