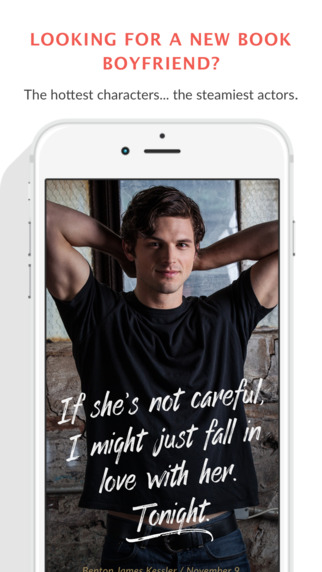 At the Huffington Post, Claire Fallon reviews a new romance book app called Crave, which launched late last year. The app from Simon & Schuster imprint Atria Books “claims to reimagine the reading experience for today’s Snapchat-addicted consumer, and it looks like part of that means embracing those breaks in concentration.”

Here’s how it works.

While reading an ebook on Crave, there will be periodic interruptions in the story: a text message between two of the characters perhaps, or an actor playing one of the characters in the book doing an interview about something going on in the book, a filmed scene from the book — “even a reaction GIF.”

But there is a catch. After 1,000 words or so, “you’re cut off.” Each chapter is broken down by Crave into mini-installments “intended to take only three or four minutes to read, including multimedia.” You can come back the next day for another installment. And later, “after you’ve returned to scrolling aimlessly through Twitter, you might receive a text alert from the book’s author, or even from the romantic lead of the novel you’re currently following.”

And, as Fallon writes, “the folks behind Crave think this format might just save the novel.”

The app was the brainchild of Ziv Navoth, the co-founder and CEO of the digital media startup Paragraph. It came about after a meeting with the president of Atria Publishing Group (a division of Simon & Schuster) where she “mentioned she’d like to forge still-stronger connections between their best-selling authors and fans.” The app features writing from Atria’s new adult and romance authors — particularly those with well-established fan bases and books guaranteed to sell “ripe audiences for ambitious marketing.

As Navoth told Fallon, “Romance readers are voracious. They read twice as many books as any other reader does. And when they discover an author that they love, they’ll read all of her back catalog.”

But it goes beyond devotion to the romance book authors themselves. Curr told Fallon, “What I discovered was that readers were more interested or as interested in the character in the novel as they were in the novelist. We created these buttons that said, ‘My book boyfriend is __.’” Fans would wear their buttons at conventions and author appearances allowing them to meet up with fans who shared in their fiction crushes.

And so, as Fallon noted “with a multimedia-filled, potentially interactive app, these book boyfriends could leap off the page, and entwine themselves even more convincingly in readers’ fantasies.”

(The first week is free, but after that a subscription fee of $3.99 kicks in — “basically,” as Fallon writes, “once the reader is hooked, Crave starts to charge.”

Navoth sees Crave as a important way to “modernize” the novel, “translating hefty books into social media-sized installments. “Our starting point, he told Huff Post, “was not, this is book with media in it. Our starting point was…if I come up to [a reader] and say, ‘You’ve got two to three hours for me?’,’ a reader might simply say, ‘No, I don’t.”

It is this “high-minded quest to save the novel from the masses (unwashed due to their unwillingness to set down their iPhones for even five minutes in order to take a shower),” Fallon says, that “purportedly drives Crave’s installment plan.”

To read more about this Crave and Navoth’s vision to “save the novel” (and a fascinating story it is), click here.