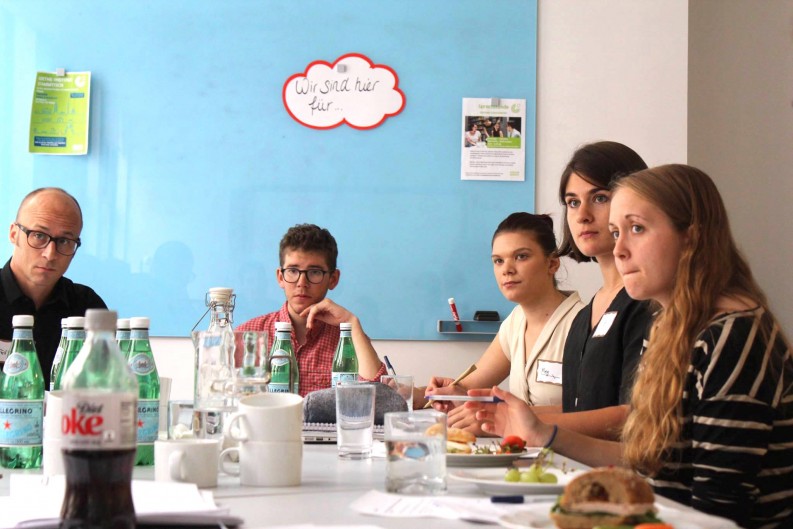 As more German translations are published in the USA, the German Book Office New York supports the growing community of German-to-English literary translators.

It’s not an easy market for literary translators: work is hard to find and the work itself is incredibly trying. To bring any text into another language is to negotiate between two lexicons, two cultures, and, on top of all that, to make it a compelling read. And yet, against the odds, the publishing industry has seen a phenomenal year for works in translation. German translations have been published in higher volumes than ever before, and have received great acclaim. “Behind every great translated book,” Riky Stock, director of the German Book Office New York says “stands a great translator.” In an effort to support up-and-coming translators in a market that is both crowded, yet seemingly on the uptick, the German Book Office recently sponsored their annual TransLab event that the Goethe-Institut New York. Ten up-and-coming (and fiercely talented) translators came together to discuss careers in translation and develop their craft with Katy Derbyshire, freelance translator and founder of the blog love german books. Katy’s workshop was split into two portions beginning with the craft, and ending with a discussion about careers in translation.

“It’s really hard to get your foot in the door,” one of the attendees wrote following the event, “and so it was such a great privilege to hear from someone who has made a career doing translation.” Katy started her workshop with an exercise: she provided with paragraphs from both English novels and foreign novels in translation, and the workshop attendees were asked to determine whether each paragraph was originally written in English, or whether it was translated. Remarkably, each participant deemed his or her assigned selection as translation — perhaps it was an odd comma splice, or a word that sounded a bit too formal in context.

Katy then assigned the translators into groups — together, they translated various German-language excerpts. The room filled instantly with noise — group members discussing options for each word, each comma. Reflecting on this exercise, participant Steve Anderson wrote, “I admit that I, like most I’m sure, wasn’t sure what to expect from translating a passage together. When working alone, I am constantly cross-referencing words and phrasings. With the group, it was refreshing to be able to bounce ideas and suggestions off one another. I enjoyed the collaboration a great deal. It opened my eyes to discover how others might approach a certain challenge. I saw that there often arises more than one solid solution.”

Indeed, when the groups came back together, their excerpts may have been incomplete, but what they did have was rich with options. Together, they discussed, as an entire group, each word of each excerpt, talking over the challenges, and positing solutions.

This emphasis proved a great learning opportunity. Liz Lauffer, one of the attendees, reflected on the challenges of group translation, but also its benefits: “The obvious challenge in group work of any kind is that you don’t get your way every time. Since it was a short workshop, we were still all very polite with each other, but not in a superficial way that resulted in a text full of compromises. If anything, we were all much more flexible and open to others’ suggestions.” A willingness to view each choice as collaboration, then, and not compromise, proved key. Participants noted that they would take these lessons back to their own translating process.

This emphasis on group collaboration seemed to carry over into the discussion about careers in translation. Often frustrated by the state of the market, the workshop attendees voiced their concerns about breaking into the industry, citing a dearth of opportunities and low pay. Katy’s message was one of support — in a marketplace with competitively low rates from commissioners such as AmazonCrossing, translators must look out for one another, she said, supporting their work and standing in solidarity with one another.

The support, some reflected, that the workshop represented was also a great boon to their careers as they forge ahead. Marshall Yarborough wrote: “I appreciate the expression of support that the workshop represents — i.e., by sheer virtue of hosting the workshop, the GBO is encouraging translators.” Katy’s workshop illustrated that perhaps a translator’s task is not necessarily done alone — it can take the support, collaboration, and encouragement of many in order to bring a text into another language, and to find a platform for doing so. It is tough, daunting work, but the community it fosters may be its greatest asset.