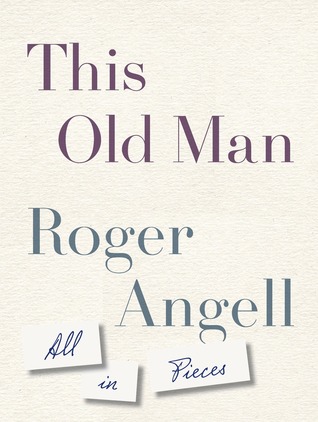 Wrapping up the year, Publishing Perspectives contributors share their top books of the 2015. Today, Chris Navratil reports from Pennsylvania. A few memorable books I read this past year rather than a list of the best from 2015, and these few that seem to linger in my mind grappled with issues of aging and loss, often in inventive ways.

In This Old Man: All in Pieces New Yorker editor/writer Roger Angell has assembled a sublime assortment of essays, letters, blog posts, etc. written mostly over the past 20 years, with the title piece diving directly and bravely into the experience of his life at the advanced age of 94.  Several other pieces touching on the various people who have departed from his life in recent years; his wife of 40 years, friends, colleagues, and weighing equally, the departure of familiar ways of living, in NYC and in the world of the 21st century. Oliver Sacks was a mere 85 when he published his memoir, On the Move this past spring, yet his interests and deep passion for living were as fresh and vital as ever, his narrative voice so alive with anticipation for new areas of discovery, whether in science or within the more personal realm of relationships. Though terminally ill at the time of writing and publishing this book, his passing this past August still felt sudden and somewhat bewildering.

Colm Toibin has been one of my favorite writers, and among those gifted few who can infuse his work, novels and short stories with genuine poignancy while never resorting to cloying sentimentality. His latest novel, Nora Webster stands out among his best work. Set in Wexford, Ireland in the late 1960’s, a youngish widow with four children, struggling to get her life on track – sounds like a soap opera, but is anything but; vivid characters, a stark, honest, memorable work of fiction.

It’s been many years since I read anything by Kate Atkinson but at a friend’s suggestion I finally got around to her novel, Life After Life and was just blown away. An amazing feat of story telling invention, and a story of loss if there ever was one, with the central character living and dying in every chapter. I couldn’t imagine Atkinson could ever top that performance, but she did just that with A God in Ruins. If in Life you may likely recall the inventive plot and stunning set pieces. In God it was the characters who grabbed your attention, many of whom had migrated from that initial work, including the central character Teddy Todd, the sweet likable younger brother from Life, now much older and somewhat bitter. The lingering question, how does one find continued meaning in a long life when the momentous experience in your life, in Teddy’s case as a fighter pilot in the RAF during WII, recedes to the far distant past.

The experience of mourning can lead you down some unusual paths but perhaps no more so than choosing to train a goshawk. For writer, Helen Macdonald the sudden loss of her father inspired her to do just that and her memoir of this experience, H is for Hawk was easily among the more fascinating and surprisingly inspiring books I’ve read in quite some time.